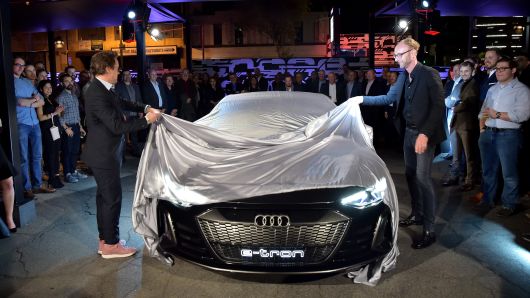 “I’ve been having an extramarital affair for a decade,” actor Robert Downey Jr. said with a frown. “With a brand,” he quickly added, his glum expression transforming into a grin.

The “Iron Man” actor turned out for a media preview staged by Audi to mark the opening of the annual Los Angeles Auto Show this week, and Downey ticked off a list of the various models he has owned in recent years, including one of the R8 sports car featured in the first film starring that superhero. But it was a new Audi that Downey admitted now lusting for, the e-tron GT, an all-electric supercar that the German luxury brand plans to put into production in two years.

The e-tron GT was just one of many “electrified” vehicles debuting at this year’s L.A. Auto Show media preview, a mix running from mainstream to exotic. Indeed, the industry is on the verge of opening the floodgates on dozens of battery-based vehicles — from “mild” hybrids to all-electrics — coming to market over the next 12 months. As many as 100 electrified vehicles are scheduled to come to market by the end of 2020. But while there’s plenty of new cars, an old question remains: will there be enough buyers to justify the surge?

The auto industry is in the midst of a massive transformation. That includes the rapid shift from passengers cars to light trucks. Utility vehicles alone now account for about half the new vehicle market, a figure that jumps to two out of three when you add in pickups and vans.

As one might expect, the L.A. Convention Center is filled with new SUVs and car-based crossover-utility vehicles, including the all-new, three-row Hyundai Palisade, the updated Nissan Murano and the next-generation Kia Soul. The latter model will be offered in several different versions, including the Soul EV featuring an all-electric drivetrain.

While buyers are clearly clamoring for utility vehicles, however, they’ve been much more tepid when it comes to electrified offerings — all-electric or hybrid vehicles. Factor in everything from those mild hybrids to pure battery-electric vehicles, or BEVs, and they collectively accounted for barely 4 percent of the total American market in 2017. Sales have picked up this year, with Tesla struggling to keep up with demand for its compact Model 3. But, even then, electrified vehicles will end the year with around 5 percent market share.

“The jury is still out on how much electrification will penetrate the market,” said Ron Cogan, the publisher of the online magazine, Green Car Journal, and founder of the annual Green Car of the Year Award that this year gave that honor the Honda Insight hybrid at an L.A. Auto Show ceremony.

There are a number of reasons why the acceptance of battery technology has been slow to take hold, Cogan said, including cost, range and infrastructure. Certainly the first generation of vehicles were expensive and, with BEVs, they typically offered limited range. Complicating matters was the lack of a public charging network.

That has begun to change. “You’re just not going to see new battery-electric vehicles come to market with less than 200 miles range anymore,” said Joe Phillippi, head of AutoTrends Consulting.

Price is still a challenge. A study by the Boston Consulting Group estimated it will take until the second half of the coming decade, at the earliest, before comparable gas and battery-powered models will have price parity. That said, most manufacturers are heavily subsidizing their electrified offerings, only a few models, like the Toyota Prius hybrid, currently thought to be generating a profit.

The late Sergio Marchionne, then CEO of Fiat Chrysler, suggested he wouldn’t mind if he didn’t actually sell any Fiat 500e battery-electric vehicles after the car’s 2013 introduction, noting “We will lose $10,000 per vehicle. Doing that on a large scale would be industrial masochism.”

But manufacturers are, indeed, laying out large-scale manufacturing plans. Volkswagen, which introduced a commercial version of its all-electric I.D. Buzz cargo van in L.A., also revealed that it will set up a second U.S. assembly plant specifically dedicated to electric vehicles. The plant Toyota and Mazda plan to jointly operate in Alabama will also produce new BEVs. And even as General Motors moves to trim production of slow-selling models, it has indicated it will ramp up its BEV output, at least two models set to debut next year, with more than 20 planned by mid-decade.

The day before the Green Car of the Year was announced, the L.A. Auto Show hosted another awards ceremony, the 60 journalist members of the North American Car, Truck and Utility Vehicle of the Year, or NACTOY, group revealing three finalists in each of those categories.

Green Car of the Year

In a significant first, more than half of the vehicles chosen used some form of battery power. These includes the “mild” hybrid Ram 1500 pickup, the conventional hybrid Honda Insight, and two all-electric models, the Hyundai Kona EV and the Jaguar I-Pace. (The latter model was also named Luxury Green Car of the Year on Thursday.)

The push into electrification will strain budgets across the industry. Earlier this month, Volkswagen Group CEO Herbert Diess told Automobilewoche magazine that “We have bought batteries for 50 million vehicles,” Diess said in his interview, with those batteries expected to cost the automaker about 50 billion euros, or $56 billion.

And the company is expected to spend an equal amount on vehicle development, analysts like Phillippi estimating the industry, as a whole, will invest as much as $200 billion on battery-cars of all sorts — as well as hydrogen fuel-cell vehicles — by 2030.

Why spend so much on technology consumers have been reluctant to embrace? Credit or, if you prefer blame, increasingly stringent mileage and emissions regulations falling into place around the globe. These include the U.S. government’s Corporate Average Fuel Economy standards set to increase to an average 54.5 miles per gallon by 2025, as well as the recently enacted New Energy Vehicle mandate in China.

But proponents also believe that demand will pick up rapidly as range increases and vehicle costs drop. Meanwhile, an electric vehicle infrastructure is beginning to fall into place. On Friday, VW and Tesco, Britain’s largest retailer, announced a deal that would set up 2,400 electric charging bays at 600 Tesco stores in the UK. As part of the settlement of its diesel emissions scandal, meanwhile, VW will set up thousands of U.S. charging stations, including hundreds at Walmart stores.

ChargePoint, the biggest supplier of charging hardware and charging stations in the U.S., this week raised another $240 million to expand its network. It is focusing on super-fast “Level 3” systems that will address another challenge: slow charging times.

Early battery-electric vehicles, like the Nissan Leaf, often needed a full night plugged in, even with their limited range. That’s fallen rapidly with the latest generation of chargers and updated vehicle hardware. Audi says the production version of the e-tron GT concept in Los Angeles will be able to add as much as 20 miles of range every minute, letting it approach the speed with which the owner of a gas-powered car can fill up.

“A year ago, when people asked why customers aren’t buying electric vehicles, our response was that they just didn’t like what was being sold,” said Pasquale Romano, the president and CEO of Chargepoint, said.

He’s convinced that as more and more long-range models come to market, many in mainstream price segments, demand will for battery-based vehicles will truly take off.