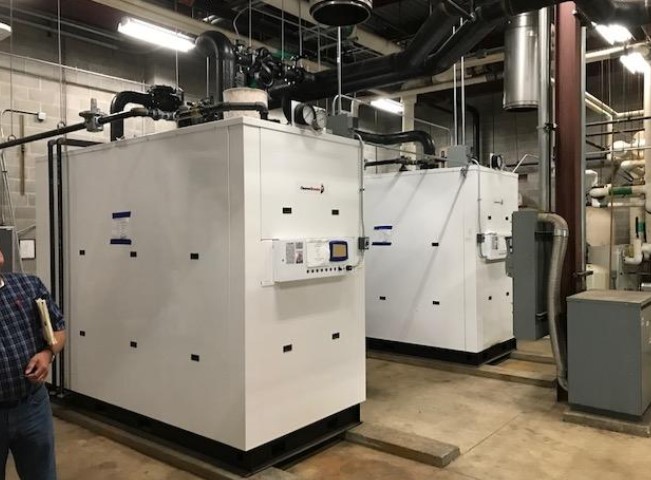 Ionia is the only school district in the state to have Energy Star certified buildings, and to receive an LED lighting rebate from the Michigan Energy Office.

To be Energy Star certified, a building must earn a score of at least 75 on A 1 to 100 scale on energy efficiency requirements, as outlined by the U.S. Environmental Protection Agency.

“I’ve always tried to be on the leading edge of change and embracing change,” Wilson said. “I jusrt think the school is such a focal point of the community. We need to be good stewards of the money they’ve entrusted with us.

“Of course this is very important for everyone, but in particular public institutions like schools, which are supported by tax dollars,” she said. “They need to be doing everything they can to be wise stewards of the money they get.”

She added that Wilson’s leadership in terms of energy efficiency has been a tremendous help to the Ionia school district.

“He’s just extremely knowledgeable about the process and using tools available to schools in terms of paying for the improvements,” Palnau said.

Wilson and his team have tackled multiple energy-efficiency projects in the district that are saving taxpayers a lot of money.

“Much like at home, there’s a lot of energy efficiency projects that will pay for themselves with energy savings,” Wilson said. “We got about $3.2 million worth of work done in the last year and a half, and it didn’t cost the taxpayers anything.”

Ionia schools were awarded a rebate for their new, energy efficient LED lighting systems. The district has also installed new, more efficient faucets and toilets in several buildings, as has replaced HVAC systems with models nearly twice as efficient.

District officials also worked out a deal with Honeywell, a corporation that inspects and evaluates properties and finds ways to reduce energy use and cost.

“It’s part of a federal program,” Wilson said. “They enter into a contract with us and guarantee the savings. If we don’t hit the savings they promise, they actually, as part of the program, cut us a check for the difference. It’s a very safe, secure way to do that.”

Despite the progress, the work in the district isn’t done.

Wilson says a lack of awareness is likely holding other school districts back from greater energy efficiency. He thinks he can help his colleagues around the state learn more.

“I feel like we’ve got a lot of new administrators around the state,” Wilson said. “I think at the winter (superintendents) conference in Grand Rapids I will probably be doing a presentation on it to the superintendents so they can see how it works.”