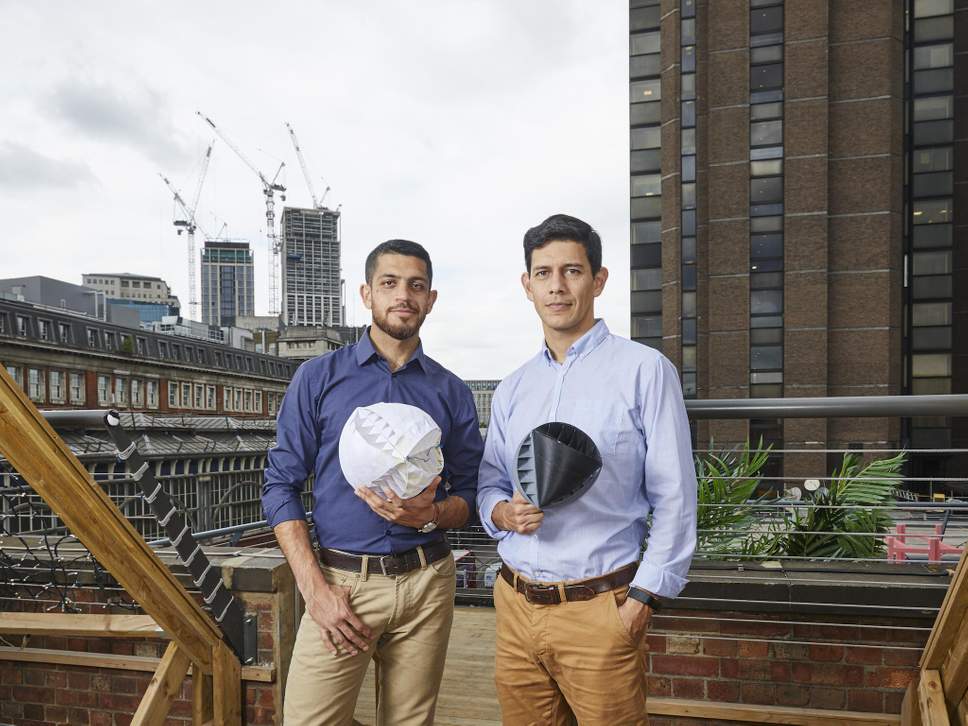 Two university students have won an award for their innovative new solution to capturing wind in cities.

The special turbine allows renewable energy to be captured in urban areas.

Traditional wind turbines only capture wind travelling in one direction. That makes it incredibly difficult to use them in cities, where the wind tends to come from all directions and can’t be predicted.

When wind blows through cities it becomes trapped between buildings, is dragged down to the street and is pushed up into the sky.

This catapults wind into chaos, which renders conventional turbines unusable.

Using a simple geometric shape, O-Wind Turbine is designed to utilise this powerful untapped resource, generating energy even on the windiest of days.

Nicolas Orellana, 36, and Yaseen Noorani, 24, created the O-Wind Turbine that allows them to harness renewable energy from urban areas.

Mr Orellana and Mr Noorani, who are students at Lancaster University, have now been announced as the UK winner of this year’s James Dyson Award.

Mr Orellana and Mr Noorani came up with the design after studying Nasa’s Mars Tumbleweed rover.

The turbine is a 25cm sphere with geometric vents and sits on a fixed axis and spins when wind hits it from any direction.

When wind energy turns the device, gears drive a generator which converts the power of the wind into electricity.

This can either be used as a direct source of power or it can be fed into the electricity grid.

The two MSc students hope the turbine will be installed on large structures such as the side of a building or balcony – where wind speeds are at their highest.

Mr Orellana said: “We hope that O-Wind Turbine will improve the usability and affordability of turbines for people across the world.

“Cities are windy places, but we are currently not harnessing this resource. Our belief is that making it easier to generate green energy, people will be encouraged to play a bigger role in conserving our planet.

“Winning the James Dyson Award has validated our concept and given us the confidence to approach investors to secure the capital we need to continue turn our idea into a reality.”

Professor Harry Hoster, director of Energy Lancaster at Lancaster University, said: “When the two students first approached us about test facilities for a new wind turbine design, we first thought it would just be the 23rd variation of some plain vanilla system.

“When they humbly showed their video and their prototype, however, we were, excuse the pun, blown away.

Mr Orellana and Mr Noorani will now go forward to compete against other international entrants with the winner chosen by billionaire inventor Sir James Dyson, who founded the Wiltshire-based company in 1991.

To help finalists to develop their idea, the overall winner is awarded £30,000 and the winners in each region receive £2,000.