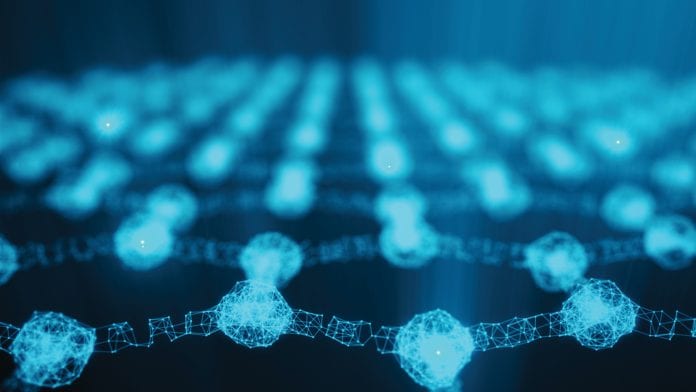 imec’s Matty Caymax comments on the progress of 2Dfun, a project which aims at manufacturing and integration processes for a dielectric/transition metal dichalcogenide/graphene platform, compatible with high-volume industrial production.

The union of graphene with semiconductors and dielectric insulators allows the development of electronic circuits. European scientists, taking part in the 2Dfun project, have found innovative ways to manufacture this triple layered product on an industrial scale, as explained in this interview with researcher Matty Caymax of imec in Belgium.1
Beyond graphene, there are other two-dimensional materials with interesting properties, such as the transition metal dichalcogenides (TMD), whose general formula is MX2, where M is a transition metal and X a chalcogen, an element of group VI of the periodic table. A well-known example is molybdenum disulphide (MoS2), a semiconductor material that offers what is called an energy gap or well-defined band gap – of the order of 1 electronvolt – that graphene does not have.

As a partnering project within the European Graphene Flagship, researches within 2Dfun have been working for the past two years on the creation of structures formed by graphene stacked with these MX2 materials. Led by imec, 2Dfun aims to apply this material to electronic devices by incorporating a third element, a dielectric insulator, such as aluminium oxide (Al2O3). One of imec’s Distinguished Members of Technical Staff, Matty Caymax comments on the progress of 2Dfun.

What are the goals of this project?

It is not only a matter of creating graphene-MX2-dielectric functional structures, but developing procedures compatible with large-scale manufacturing of integrated circuits for the electronics industry, which requires working with standard 300-millimeter wafers. We have two technological objectives (to develop industrial processes to deposit onto graphene both MX2 and a thin dielectric material, called a ‘high-k dielectric’) and a scientific one (to obtain a fundamental vision of the chemical structure and the electronic state, especially in the interfaces of the three components).

What benefits do MX2 materials offer?

They are ideal candidates for transistors thanks to their energy gap and because they carry electric charge, but they have one drawback: they do not establish electrical contacts well, but this function can be preformed by graphene sheets. On the other hand, there is the chemical perfection presented by the MX2. Any transistor in a logic circuit is essentially a switch, and needs a gate to control the current (activated would be ‘1’, deactivated ‘0’). To avoid electrical leakage, the electrode of the gate is isolated with the dielectric. A good reason to use the MX2 layers as channels is that all the atomic bonds on the surface are saturated, which means that there are no dangling bonds left that can cause problems in the delicate interface between the transistor channel and the dielectric.

How could these mixed heterostructures be applied?

In electronics, the most exciting thing, and at the same time the most demanding challenge, is precisely that the two-dimensional character of these layers allows scaling in the development of advanced transistors for logical applications, until reaching nodes with a size smaller than five nanometres. In addition, the mechanical properties of graphene and the direct energy gap offered by the TMD allow these heterostructures to be used in flexible electronic devices, optical modulators and photo detectors.

Do they have applications elsewhere?

Yes, in the field of energy generation and storage, for instance. In particular, the functionalisation of graphene with MX2 can be beneficial for connecting it to metal interconnections, which may be useful for lithium-ion batteries, where cathodes often suffer from poor conductivity. And the same goes for supercapacitors. On the other hand, they could also be applied as biosensors of substances from the environment or the organism in a much more selective way than those that are now made only with graphene.

What progress has been made in 2Dfun?

Until now, almost all the research on MX2 materials is done with small flakes of this material detached from natural crystals of a thousand of a millimetre in size. This does not work for industrial applications. During the first two years of 2Dfun we have therefore developed two kinds of growth processes (chemical vapour deposition based on thermal or plasma activation) compatible with the manufacture of high volumes of MoS2 and other materials of this type, such as tungsten disulphide (WS2) and tin sulphide (SnS) on 200 and 300mm wafers. In addition, we have successfully developed dielectric materials with high dielectric constant stacked on our MX2 for oxide-metal-semiconductor stacks (MOS), as is usual in the integration of semiconductors. They show excellent performance in transistors.

Have you published these advances in any scientific journals?

We have already presented more than 60 articles at conferences and scientific journals. For example, we have recently published two studies on molybdenum disulphide (MoS2) as MX2 in ECS Transactions, one using electron photoemission spectroscopy and another in which we use a technique called ‘electronic paramagnetic resonance’. In another work, which appears in Chemistry of Materials, we have functionalised MoS2 with a thin layer of silicon oxide (SiO2) to deposit an atomic layer of high-k dielectrics. In these studies researchers from imec and the University of Leuven, Belgium, are involved.

How many groups are involved in 2Dfun?

2Dfun has five partners: three universities (the University of Leuven, the Technical University of Eindhoven in the Netherlands, and Bilkent University, Turkey), an industrial partner (the equipment manufacturer Oxford Instruments in the United Kingdom) and imec, one of the largest European research institutes for technological development, which acts as the co-ordinating partner.
The experience and contributions of each of them are complementary and are aimed at achieving the objectives of the project, with an eye on the capacity of mass production of hetero-structures.

What stage of the project have you now reached? What are the main challenges?

We have just started the third and final year of 2Dfun. In the first two years we developed the processes of growth of layer stacks with MX2 and the high-k dielectrics for the gates, using as a demonstrator a metal-oxide-semiconductor field effect transistor (MOFSET). We have already manufactured the first integrated transistors. The objective of the gate is fundamentally solved, although it can still be improved, but what we have not achieved yet are the low resistance contacts between the MX2 layers and graphene. We are designing a new approach to solve this problem.
The 2Dfun project is a Partnering Project of the Graphene Flagship. SINC produces scientific news for the European project SCOPE, co-ordinated by FECYT and funded by the European Union through Horizon 2020, its funding programme.
SCOPE’s mission is to communicate the visionary research results of partnering projects in the framework of the Graphene Flagship and the Human Brain Project, as well as to enhance the FET Flagships partnering environment in the European Union.