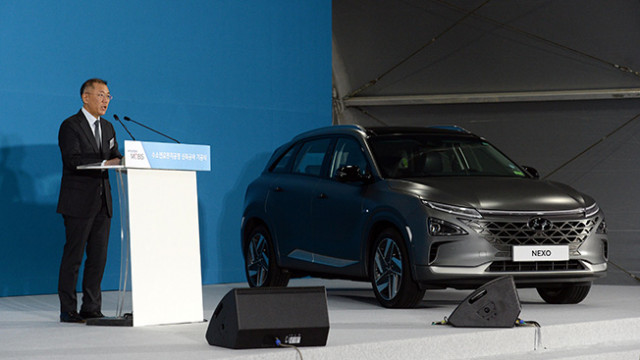 Hyundai sees a lot of potential in hydrogen fuel-cell technology. And it may find success with it by looking well past cars and SUVs—to other uses that could, as the company puts it, “transcend the transportation sector.”

With this week’s opening of a second plant making fuel-cell systems, in Chungju, South Korea, Hyundai’s Mobis unit will increase its annual production of fuel-cell systems from its current 3,000 annual units to 40,000 units by 2022.

The plan, called FCEV Vision 2030, highlights the parent company’s “commitment to accelerate the development of a hydrogen society.”

By 2030, Hyundai Motor Group aims to make 700,000 fuel-cell systems annually, of which 500,000 would be units for personal-use and commercial fuel-cell electric vehicles. That leaves 200,000 units for drones, vessels, and forklifts and other uses outside transportation such as power generation and energy storage systems.

That’s still a very small portion of what the company currently produces; in 2018 it expected 7.7 million worldwide vehicle sales across Hyundai and Kia.

To accomplish this plan, Hyundai established a dedicated division for fuel-cell business this month. Under the program, the Hyundai Motor Group and its suppliers plan to invest $6.8 billion to expand R&D operations and facilities, with an estimated 51,000 new jobs created.

Hyundai justifies the very steep growth curve by citing a McKinsey & Company study, pointing to an estimated global demand for up to 6.5 million fuel cell systems by 2030.

The 2019 Hyundai Nexo, which showcases the potential of a new generation of fuel-cell tech from the brand, with an estimated 380-mile range, will be available by sale or lease starting in January—albeit only in California, where a nascent commercial fueling infrastructure exists. That model is going to be the first test vehicle for a Level 4 automated-driving project with the autonomous-vehicle tech company Aurora.

Honda and GM continue to work on a next-generation fuel-cell system that will be produced in Michigan, and Toyota has confirmed that it’s looking to put the technology into more affordable, mass-market vehicles as well as commercial trucks and buses.

There’s another reason why Hyundai should be so bullish on fuel cells. The South Korean government is subsidizing a $2.3 billion plan to support various stages of the hydrogen fuel-cell development chain, including automakers, as well as 310 new hydrogen fueling stations.

Given the biggest limitation for fuel-cell technology in the U.S. today—a lack of hydrogen fueling infrastructure—aiming the growth of the technology toward commercial uses and very well-defined use cases could be a good plan to play on its strengths.