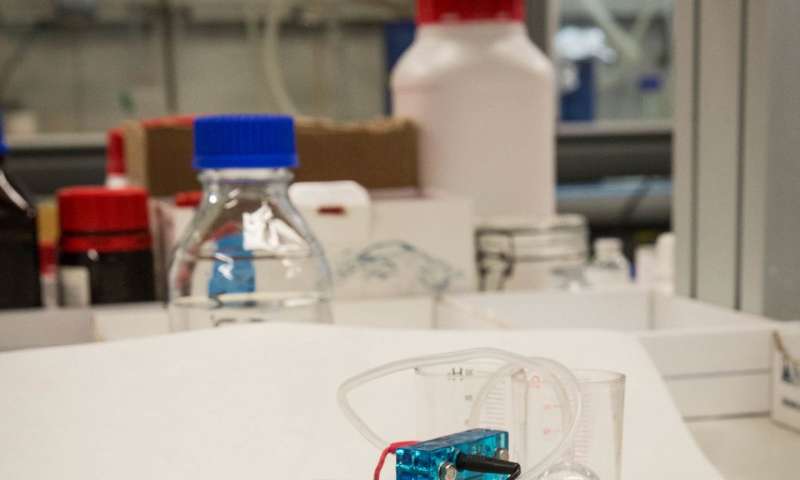 Researchers at the Institute of Chemical Technology and collaborators have successfully developed and tested a scale car prototype that stores and generates hydrogen safely and is capable of using it as fuel.

HYPROSI uses a process patented by these researchers that allows the efficient production, storage and safe transport of hydrogen for using it in fuel cells through so-called liquid organic hydrogen carriers, or LOHC.

The organic liquid carrying hydrogen is the result of the combination between a silane and an alcohol that, in the presence of a catalyst, allows the generation of hydrogen in a rapid and controlled manner. Its main advantage is that the production of hydrogen is carried out at atmospheric pressure and at temperatures even below 0 ºC.

“It is a versatile process from the chemical point of view, because there are many combinations of hydrosilanes and alcohols that can be used and the safety risks derived from high pressure gas storage are avoided,” says researcher José A. Mata, project manager of HYPROSI.

Hydrogen is produced quickly and efficiently controlled by the use of catalysts. Both the organic liquids used and the catalyst are stable and can be used to produce hydrogen for long periods of time. The controlled generation of hydrogen allows its release according to the needs of the user and would solve the security problems of the vehicles that are currently on the market, since they store the gas at high pressure.

In the proof of concept carried out with the prototype (electric vehicle), an optimum hydrogen flow has been achieved that acts as a fuel cell power source. This battery transforms the stored energy in the form of hydrogen into electrical energy that allows the vehicle to be driven. The advantage of this type of batteries is that by reacting hydrogen and oxygen, the only byproduct that is produced is water. This is why hydrogen is considered one of the cleanest renewable sources on the planet.

“In this way, we take advantage of the energy contained in an organic liquid, demonstrating its storage capacity and transforming chemical energy into electricity thanks to the breakage and formation of intermolecular chemical bonds. The next step would be to apply it in a larger prototype, even in a real hydrogen car,” explains UJI researcher María Pilar Borja.

This new procedure constitutes an important advance, since it allows to solve the problematic of the storage and danger of the accumulation of gases in the automobile, being only liquid the components to take into account within the system. Therefore, the recharge of organic liquid in the vehicle could occur in the same way that a car powered by fossil fuels is refueled.

“The results we have obtained in these tests are very positive. Now, we must continue working so that this research reaches the automobile market. For this, our next challenge would be to improve the efficiency of the recovery of the starting silane, as well as to increase the amount of hydrogen stored in this silane, which in the studies carried out is 6 percent by weight,” says Hermenegildo García, researcher of the Institute of Chemical Technology (UPV-CSIC).