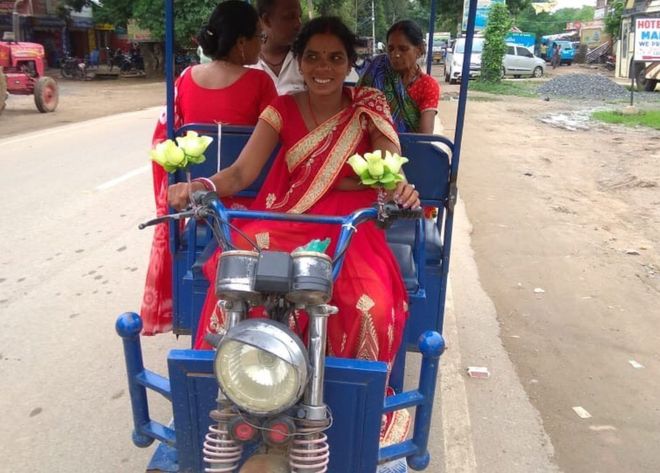 From battery-powered delivery trucks and rickshaws, to Formula E racing cars, electric vehicles are entering the mainstream. But will a lack of investment in charging infrastructure hold the market back?

In 2015 single mum Sushila Devi was struggling to make ends meet and didn’t even have the money to send her three kids to school.

However, thanks to low-cost electric vehicle technology, the 30-year-old from the state of Bihar, North East India found a solution.

With a loan from a local charity, she bought an e-rickshaw – a type of taxi powered by a three-wheeled electric scooter – and started carrying passengers in her hometown of Bodh Gaya.

The town, famed as the place Buddha is said to have obtained enlightenment, is popular with tourists and worshippers who make up most of her customers.

Shamsul Akhtar of Karuna-Shechen, the charity that provided the loan, says e-rickshaws could create thousands of new jobs for underprivileged women like Ms Devi, while encouraging environmentally friendly transport .

Firstly, they cost just 38,000 rupees to run per year – “about half as much as running an older petrol-powered rickshaw”, he says.

They’re also popular with regulators. Bodh Gaya now only allows e-rickshaws, not their more polluting cousins, within 5km of the town’s ornate temples.

From rickshaws to buses, cars to delivery lorries, electric vehicles are going mainstream and not just in the richer developed nations.

He expects even more growth by the mid-2020s, when electric vehicles “will cost the same as ones powered by internal combustion engines”, posing a huge challenge to petrol vehicles.

In the meantime, government subsidies are helping to bring down the costs. For example, China – which accounts for half of global electric auto sales – has exempted electric vehicles from purchase taxes since 2014.

His is one of a number of firms working on building larger capacity batteries than today’s lithium ion ones. Using more lithium “much increases” battery capacity, he says, but it also makes batteries less stable posing a fire risk.

Instead, researchers like him are trying to replace this liquid electrolyte with solid materials such as silicon, to make safer “solid state” batteries that hold more charge.

BMW is one carmaker looking at the tech. It plans to release an electric vehicle with a silicon anode within five years, and says it will have a 30% larger range than current models.

Meanwhile, prices for a rechargeable lithium ion battery fell below $200 per kilowatt-hour this year for the first time, says Sarwant Singh, head of the transport team at consultancy Frost & Sullivan. That’s down from $750 in 2010.

“The forecast is they’ll fall below $100 in the next five years,” says Mr Singh. “[Then] they become really attractive, and below $80, you’re really killing the gasoline engine.”

In the range they permit, today’s electric car batteries are “much closer to what we know from a petrol engine”, says Nicolas Griebner, head of product at Mini UK.

“We’re not there yet, no question, but we are a lot closer than we used to be,” he says.

There is now an electric-powered car racing championship – Formula E – where 10 teams from around the world compete.

In its first four years, “drivers raced for 50 minutes, and halfway through the race had to get out of one car and jump into another,” says Formula E spokesman Sam Mallinson.

But new, bigger batteries mean from next season they won’t need to.

Formula 1 vehicles still travel at much faster speeds reaching 240mph. However, the next generation of Formula E cars could travel as fast as 186mph, say experts – up from about 140mph currently.

“[When designing] an electric car from scratch, you do the architecture differently than if you were basing your vehicle on an internal combustion car,” he says.

One Chinese electrical vehicle start-up, Nanjing-based Byton, is putting the finishing touches to a car with a 125cm (4.1ft) wide digital screen in front, which can be divided into different windows.

Byton spokesman Oliver Strohbach says the “very big” screen and better connectivity will let drivers hold digital meetings while they are stuck in road traffic, and have “something meaningful” to do while commuting.