From the salt flats of the Atacama Desert in Chile to the savannas of the Congo, the makers and users of the world’s batteries are scrambling to secure the vital raw materials needed to produce the lithium-ion cells that will power electric vehicles around the globe. But no battery-makers are more aggressive than those from China, which is working to lock down the entire supply chain for its companies. Meanwhile, the United States will rely on economies of scale to compete in storage-cell manufacturing, turning toward North American raw material producers to ensure supplies whenever possible. Even then, the country will face stiff competition from Chinese investors — to say nothing of European automobile companies, who will be compelled to increase their reliance on China. Buoyed by support from the highest levels of government, Chinese companies are likely to find few challengers over the next decade and a half as they come to dominate the global supply of lithium-ion batteries.

Beijing is leaving no stone unturned in its quest to get control of the lithium-ion battery supply chain, because those storage cells will power the electric vehicles that are a critical component of the country’s national strategy to improve the environment and develop new technologies domestically. Much like the Belt and Road Initiative, the undertaking focuses on production and distribution. Because the demand for the batteries is expected to rise rapidly along with the demand for electric vehicles, storage-cell manufacturers and automakers are trying to get a lock on the necessary raw materials. 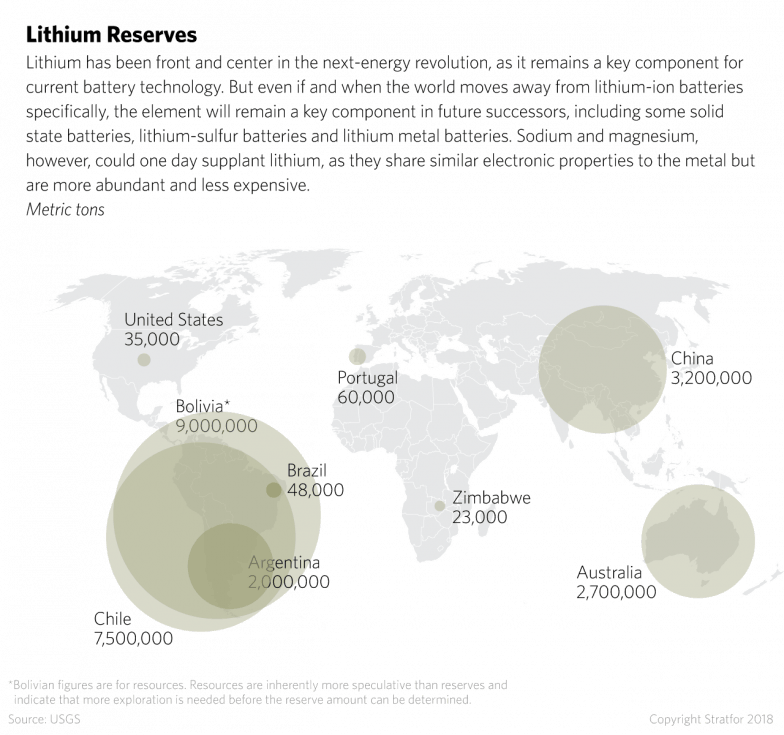 Accordingly, China and its companies have been busy abroad in recent months. Tianqi Lithium Corp. purchased a large share of Chilean lithium giant SQM in May, and 35 companies active in the Democratic Republic of the Congo established the Union of Mining Companies With Chinese Capital on June 18. The grouping includes China Molybdenum Co. and was formed to facilitate relationships between Beijing and Kinshasa at a time when the latter’s new mining codes and political uncertainty are giving Western producers cause for concern. Besides securing raw materials, China is also increasing its manufacturing capacity. Carmaker BYD Auto Co. recently opened a new battery manufacturing facility; when it reaches full capacity, it will be the world’s largest. But the company that best exhibits this expansionary strategy is Contemporary Amperex Technology Co. (CATL), which is planning to boost capacity by 24 gigawatt-hours per year (roughly 20 percent of current global manufacturing capacity) by 2020, as it tries to become the world’s biggest battery producer. Chinese companies already control roughly 60 percent of the world’s lithium-ion-battery manufacturing capacity — up from about 50 percent in 2013 — and are set to control a majority of future capacity as well. 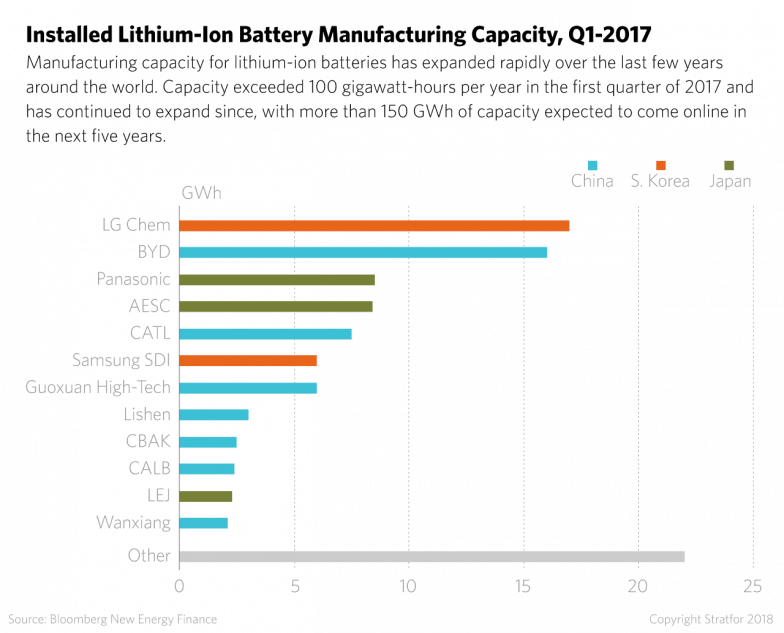 But this type of battery won’t dominate the market forever. Growing demand and the search for cheaper and more accessible sources will drive research and development into new technologies. It is here that China’s stranglehold on the market could weaken. The use of cobalt is a likely starting point. Other battery manufacturers, including Tesla Inc., are already responding to the market uncertainty for the metal and Beijing’s position of strength by working to reduce or eliminate cobalt from battery chemistries. Moreover, Toyota is well-positioned in research and development to pioneer solid-state batteries that would require a new supply chains. But Chinese innovations have been growing in recent years, as have the indigenous capabilities of its battery producers, and the increasing number of patents across numerous sectors is just one illustration of this growing innovation potential. Thanks to a comfortable control of the supply chain, Chinese companies will not face the same drive as other world leaders will to accelerate the development of new technology, but they will still strive to avoid falling behind. Ultimately, even if the United States, Japan or South Korea attempt to exploit a shift in primary battery type to regain significant market shares from China, the latter will move quickly to close the gap.

The United States still has the potential to compete with China in the lithium-ion battery market, even if its global market share declines. Although the electric vehicle market will struggle in the United States because of the lower emissions standards implemented by the current U.S. administration, some large states will mitigate this sales drop. California recently announced its support for an extensive expansion of charging infrastructure over the next several years. Meanwhile, Tesla, in partnership with Japan’s Panasonic Corp., has been the flag-bearer for U.S. battery manufacturing. The company has experienced some setbacks lately, but its battery-manufacturing capacity is expected to expand over the next several years. Traditional battery powerhouses such as South Korea and Japan will also find opportunities in the United States to benefit from the expertise and excess cell capacity through partnerships. 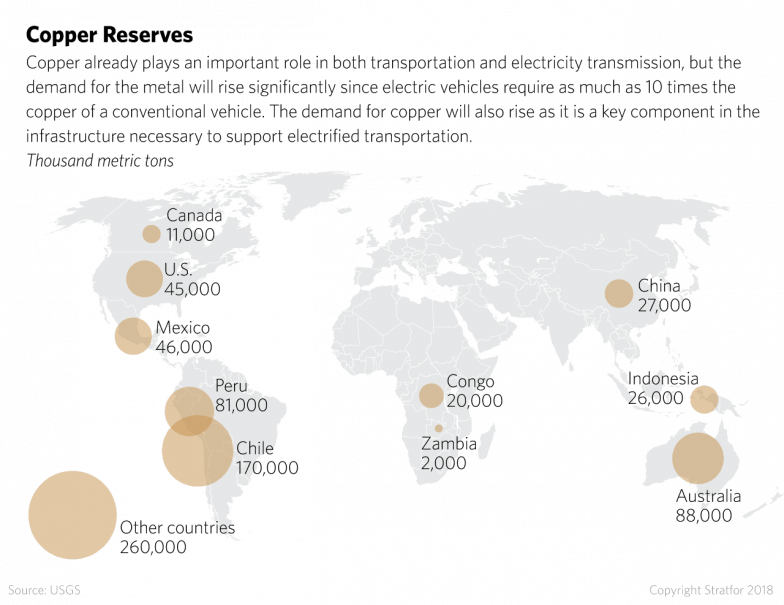 And in an effort to ensure their own supplies, North American battery producers will look to their own continent for raw materials. Indeed, Tesla owner Elon Musk stated in 2014 that his company will work to find sources in North America as much as possible. The current trade and political environments may push others to work toward a similar goal. The relevant mining operations in the western United States and Canada (exploration is ongoing in Canada, while lithium reserves in Nevada also show potential) are still in their nascent stages, but such facilities could eventually provide a degree of raw material security to North American producers. 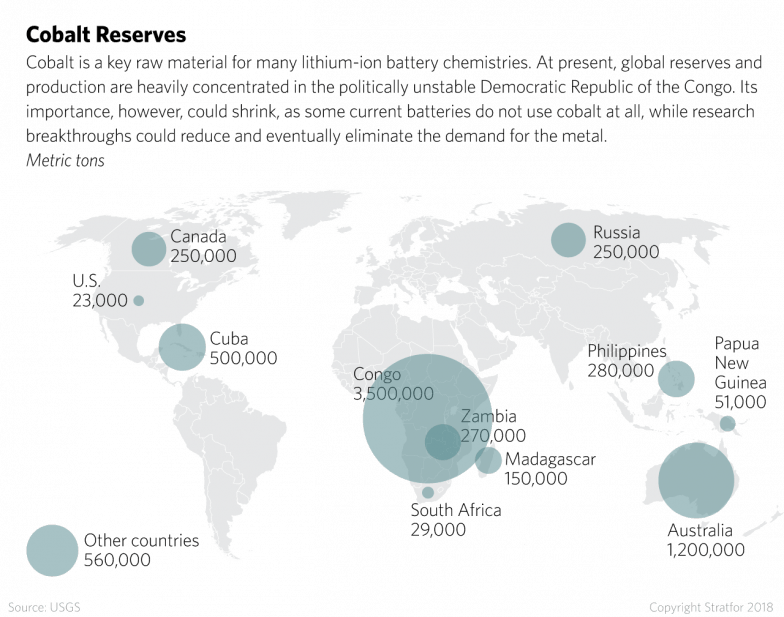 But even then, U.S. producers and consumers will not succeed in breaking free of China’s influence on battery supplies and sales, because its investment and involvement in the North American electric vehicle supply chain will continue. For example, A123 Systems Co., a battery manufacturer whose majority owner is Chinese, already supplies batteries to Fiat Chrysler Automobiles. Ultimately, U.S. auto manufacturers will retain their focus on the Chinese market, because much of the global electric vehicle expansion is occurring there — and will continue to do so thanks to the government’s placing a priority on such automobiles. In 2017 alone, the country added more than 500,000 electric vehicles. South Korea previously attempted to penetrate the market, when LG Electronics Co. and Samsung Electronics Co. sought to become the battery suppliers for Chinese-built electric vehicles. The South Korean giants, however, failed to receive approval, possibly because of Beijing’s retaliatory measures against Seoul for its decision to install the Terminal High-Altitude Area Defense (THAAD) anti-ballistic missile system. Regardless of political motivations, China is likely to remain selective about which competitors it allows in, even if it reduces some barriers to the market. For U.S., Japanese, and South Korean battery-makers, the Chinese electric vehicle battery market is simply too large to ignore, but success will likely come only in markets where there is significant resistance to Chinese investment. 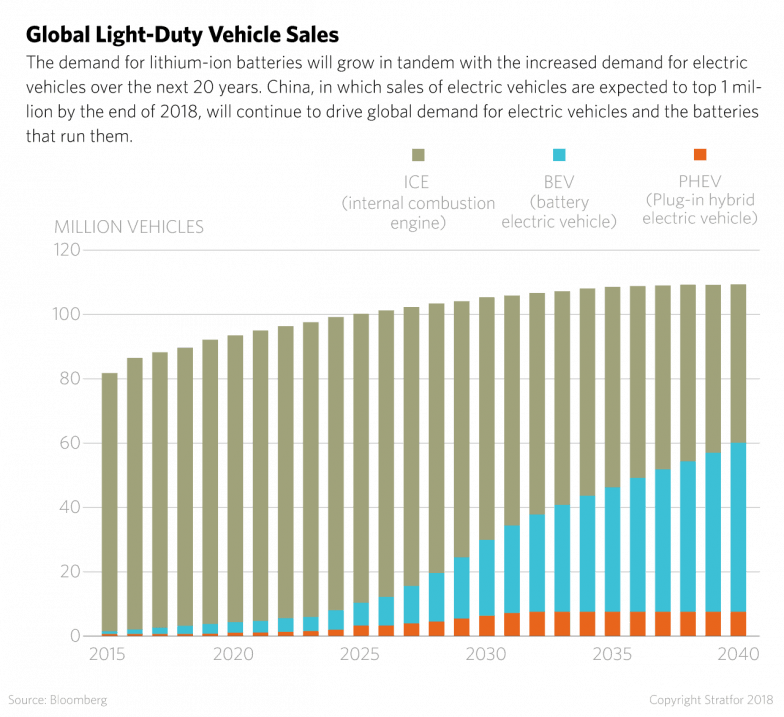 As a whole, the European Union remains far behind its economic counterparts in establishing battery manufacturing capacity. Despite boasting some of the world’s biggest incentives for electric vehicles (a number of bloc members have called for the elimination of internal combustion engines by the century’s midpoint), the batteries to support this movement will likely be made elsewhere. Because China’s national strategy seeks to spread influence beyond its borders, battery manufacturing may soon play a role. CATL, which has been critical in securing raw materials for batteries for carmakers, including Germany’s BMW Group, will strive to increase its influence on the Continent. Already, CATL has announced deals to construct new facilities in Germany, though similar plants may face pushback in the future.

Some countries, especially Germany, have resisted Chinese involvement in sectors that are deemed to be critical to national strategy. German concern has grown after China’s Midea Group acquired German robotics company KUKA in 2016 and Chinese automotive manufacturer Geely purchased a 10 percent stake in Daimler AG in 2018. Germany remains protective of its technology and automotive sectors.

And given the pivotal role that vehicles, renewables and their power storage play in the future energy strategies of Germany and the Continent, China is likely to see additional resistance if its involvement becomes too ubiquitous — a development that would open the door for others. Accordingly, South Korea and Japan will continue to partner with U.S. companies to strengthen themselves in markets such as Europe (as well as Australia) where domestic battery manufacturing capacity cannot meet domestic demand. Ultimately, if Chinese domination of the Continental market becomes too strong, Europe may have little option but to continue to work with Beijing.

As long as lithium-ion batteries make the world’s latest technologies go round, China is poised to dominate the global battery market. However, this type of battery is unlikely to reign forever. Just as lithium-ion supplanted its predecessors, new technologies are likely to emerge and penetrate markets in the next 15 years, requiring a restructuring of facilities and supply chains. Once these technologies — such as lithium-sulfur batteries and eventually sodium and magnesium batteries — mature, the world will be better-positioned to regain some of the ground it is presently losing to China. But Beijing is boosting its research capabilities and continuing to emphasize the development of energy storage and related technology, so the Far Eastern giant won’t go down without a fight.