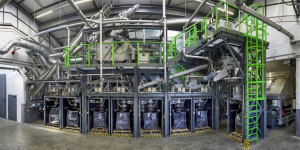 Saubermacher and Redux Recycling have installed a battery recycling plant in the German town of Bremerhaven after jointly researching the process over years. The plant is capable of processing all types of lithium-ion batteries and has a capacity of 10,000t a year.

Redux Recycling and Saubermacher Group (literal translation: Cleaners Group) have invested 3 million euros in their plant. To receive a recycling rate up to 40 percent higher than usual targets, the companies have worked out a process over years.

Still, recycling of batteries is time-consuming, multi-stage process. It runs from discharge and disassembly over thermal treatment to mechanical processing but the effort is worth it. Gerhard Ziehenberger, COO of Saubermacher AG explains: “At present, we’re achieving around 60 % to 70 %,” a recycling rate that is higher than usual.

The plant recovers secondary raw materials such as stainless steel, aluminium, copper, plastic and active materials. The energy obtained from the batteries in the discharge process is fed into Redux’s own grid.

Developing the idea to the scale model took six years and another two to actually realise the large-scale plant. Still the goal has not been achieved fully. “Our vision is zero waste, so in the long-term, we’re aiming for a recycling rate of 100 %,” continues Ziehenberger.

Saubermacher is working with technology partners like AVL List GmbH and their internal R&D team on various approaches, such as using used battery systems as storage media.

Saubermacher Dienstleistungs AG is an international disposal and recycling company based close to Graz, Austria.