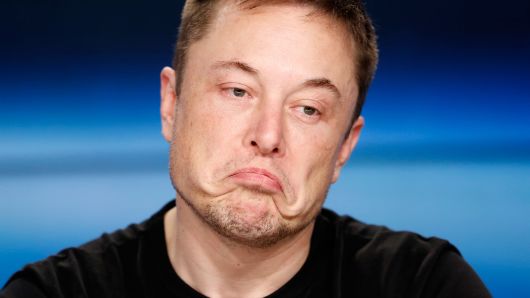 One of Tesla’s biggest advocates is giving up on his positive view of the carmaker’s stock because of CEO Elon Musk’s controversial behavior.

“We have been one of the most bullish on TSLA shares since initiating coverage last October. … We continue to believe that Tesla could be a lot bigger than it is today,” analyst Romit Shah said in a Tuesday note to clients entitled “No Longer Investable.” “The issue though is the erratic behavior of CEO Elon Musk. During the second quarter, the switch seemingly flipped. … We are worried that this behavior is tainting the Tesla brand, which in terms of value is most important.”

Tesla shares are down 2 percent Tuesday.

Shah reduced his price target to $300 from $400 for Tesla’s stock, representing 5 percent upside from Monday’s close. His previous target was the sixth highest on Wall Street among 22 analysts, according to FactSet.

The analyst said Musk now tweets 15 times per day on average since May versus four tweets per day in the previous 18 months. He added Musk’s actions are hurting the company’s ability to retain executive talent.

“Mr. Musk’s behavior is well documented (taunting short sellers, NY Times interview, cave diver accusation, earnings call outburst, Joe Rogan podcast) and likely contributed to the onslaught of executive departures in recent months,” he said. “Notwithstanding improving fundamentals, we believe that Tesla is in need of better leadership (an about face) and are moving to the sidelines until we see what happens with management.”