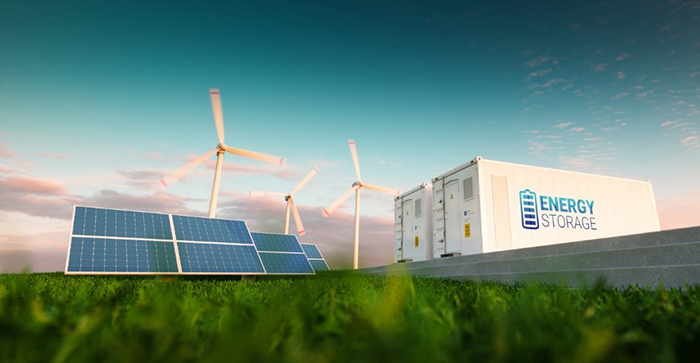 If you were looking for the perfect energy stock…

First, you’d look for an incredibly rare element… one with limited supply.

Second, you’d want an element now under the radar… but about to break out with huge potential demand.

Third, you’d want a company with a virtual monopoly on the element…

And these three things may well have just aligned.

There’s a new metal — not any of the usual precious or rare earth metals — that is seeing demand soar..

And one little-known miner has a virtual monopoly on U.S. supply!

The metal? Element 23… Vanadium… it could be the key to the next energy revolution.

A metal that President Trump has added to a list of minerals that are ‘critical’ for national security.

The biggest problem in green energy isn’t production: there’s plenty of wind and solar power out there, and building panels or turbines has never been easier, or cheaper.

The problem is scaling up energy storage capacity: in other words, building batteries that are big and durable enough to handle the increasing load.

While great for short-term, small-scale use in cars or cell phones, lithium ion batteries can’t be expected to carry the full weight of a clean energy electrical grid.

Lithium battery costs have fallen substantially, from $1000 per kilowatt hour (kWh) to $200/kWh. But costs would soar if lithium batteries were installed to feed and back-up an entire grid.

Worse, experts believe lithium battery costs will never be less than $100/kWh, which isn’t an economic rate for storing energy on a large scale.

Large lithium batteries need a lot of lithium, which is an expensive mineral to produce on a large-scale… and lithium mining can have a major environmental impact.

It’s what the billionaire founder of Ivanhoe Mine Robert Friedland calls “the next revolution in energy.”

And it’s all thanks to Vanadium, Element 23 on the periodic table and why small cap explorer United Battery Metals  is so excited about the future.

Consider the dry-cell battery. It’s in a lot of standard appliances, from remote controls to wireless keyboards and portable stereos.

The design is very simple: a metal electrode or graphite rod surrounded by an electrolyte paste is sealed inside a metal cylinder. The paste reacts to zinc inside the battery, producing energy through a chemical process.

Even the brand-new lithium batteries used in electric cars use basically the same methods as any old dry cell battery.

Two liquids held in separate containers are used to produce an electrical charge, which can then be discharged without any need for graphite anodes.

Vanadium flow batteries use an electrolyte fluid that flows back and forth between two tanks.

And there’s no limit to the amount of liquid used in a single battery…which can be as large as a shipping container.

Imagine batteries that can be produced in differing sizes to fit differing needs: from powering a car… to charging 50 cars simultaneously… to fueling a house… to producing enough energy to power a factory.

The key to building the new liquid batteries is vanadium, Element 23. Unlike lithium, vanadium doesn’t degrade over time.

And United Battery Metals seems to be one of the only company’s in the U.S. paying attention.

These vanadium redox flow batteries (VRFB) are superior to the dominant lithium batteries.

With a lifespan that is effectively infinite, vanadium can be relied upon to serve as the foundation of a liquid energy battery longer than any other element.

With no need to replace the vanadium, the batteries are cheaper to manufacture on a large scale over time.

A study completed last year by the Imperial College London found that flow batteries beat out their lithium competitors: they would require an investment of only $4 billion to reach a level lithium could only reach after $94 billion.

That’s an over 20-fold improvement.

Moreover, VRFBs are safer: unlike lithium, they aren’t prone to sudden catastrophic failures, leading to overheating or explosions.

Right now, experimental vanadium batteries can produce energy at $500/kWh, but that is expected to fall to $150/kWh. But the real key is in scaling: building bigger and bigger vanadium batteries is simply a matter of adding more and more fluid.

The facts are in. The evidence speaks for itself. Vanadium batteries beat out lithium in every way. There’s really no competition.

We’re about to witness a revolution in how energy is stored.

And the battle for Vanadium is getting bigger and bigger.

#3: THE GLOBAL BATTLE FOR ELEMENT 23 HAS BEGUN

The power of vanadium is no secret. In fact, vanadium steel has been around for a while. Lighter and stronger than other metal alloys, it’s used in the manufacturing of complex components in airplanes, high performance cars and rocket engines.

China wants to end its exports of cheap, poorly-made steel. It’s demanding a stronger rebar requirement from its steel manufacturers, forcing them to incorporate more vanadium.

Today, vanadium is found in 43% of cars. But by 2025, 85% of cars will use vanadium steel components, thanks to their improved durability and lower weight.

Plus, thanks to recent government regulations, a “second boom” in vanadium steel is taking place as U.S. steel producers finally begin to ramp up production again.

Demand for vanadium is strong. But the real reason prices will be soaring soon is in surging demand for VRFBs.

Countries around the world want to increase their energy storage capacity, and they’re turning to VRFBs to do it.

China has already started construction on the biggest battery in the world, a 200-MW 800-megawatt hour storage station in Dalian province. The battery will be charged with wind power and will utilize VRFB technology to store more power for longer, resulting in a stable energy grid without any fossil fuels or lithium.

India plans to install 50 solar parks with 500 MW capacity in the next several years. These parks, equal to 40 modern nuclear power plants, will need VRFB batteries to handle their colossal energy production.

United States energy storage demand is expected to increase 900% by 2023. Only VRFBs will be able to provide efficient energy storage. And United Battery Metals is one of the few companies looking to build domestic supply.

With this kind of demand forecast, it’s no wonder that MarketWatch picked vanadium as a market to watch in 2018. According to Bushveld Minerals CEO, vanadium was the best performing battery mineral of 2017, growing 72% and achieving 500% growth since 2015.

Vanadium is on everyone’s radar, and it’s attracting some major press attention.

The problem? Vanadium is hard to find.

The United States has no strategic stockpile of this vital mineral. If it doesn’t ramp up domestic production, it might get lost in the dust.

The Wray Mesa property used to be a uranium mine back in the days. When miners first came to this sleepy corner of Colorado, the United States was in desperate need of uranium, a strategic mineral that was the key to nuclear energy.

But now, the U.S. needs Vanadium. As Mining.com puts it, it’s the metal “we can’t do without and don’t produce.”

Now, UBMCF has staked a claim at Wray Mesa. But they’re not looking for uranium. Instead, they want to turn the property into the first productive vanadium mine in the Lower 48.

UBMCF’s mining team had a hunch. Where there’s uranium, there’s usually vanadium close by, as the two minerals tend to be found in close proximity.

At Wray Mesa, according to the previous 43-101 completed, there is an indicated resource of 500,000 of uranium with an estimated vanadium resource of 2,700,000 pounds.

The company is optimistic about expanding the vanadium resource estimate which, in some areas, Vanadium is being found at a ratio of 6:1 or even 14:1.

The current estimated total deposit as per the previous 43-101 report could be huge, as big as 2.7 million pounds of vanadium, with a current market price of $49.9 million.

The company plans to further explore and significantly increase production of the resource so the current 2,700,000 pounds could just be the starting point with an unlimited blue-sky potential on the Wray Mesa.

But that’s just the beginning, based on previous efforts to uncover uranium. The UBMCF team has new exploration underway that focuses JUST on vanadium.

Plus, the area is exposed sandstone and will pose no challenge to experience miners. The region around Wray Mesa has been extensively mined for uranium, with more than 700 holes drilled, and infrastructure remains in place to move product to market quickly and efficiently.

President and CEO Matthew Rhoades is an accomplished professional geologist with thirty years of extensive experience in the US, Mexico, Canada and South America. He’s experienced in battery tech and lithium mining, having served as President and CEO of United Lithium Corp. before it changed its name to United Battery Metals.

Advisor Eric Saderholm is another mining professional with three decades of experience, and a man who has added millions of ounces of gold to reserve bases in Nevada, Washington and Peru.

Mr. Saderholm worked with Newmont Mining as their exploration manager for the entire western region of the USA. His skills and access to potential new properties add tremendous value to the company’s portfolio.

UBMCF has a potential major find on their hands: what could possibly be the first productive vanadium mine in the United States.

And investors who want to take advantage of this opportunity have to act fast, before the rising tide of interest in VRFBs becomes a tsunami.

Both Element 23 and the “liquid electricity” battery are in the news, and they’re generating a lot of buzz. There are powerful reasons to expect the vanadium market to surge in the coming months.

But there’s no Vanadium ETF. Vanadium doesn’t trade on COMEX or LME. The only way to gain exposure to the market is to invest in miners.

China is building the world’s biggest battery using VRFB technology. These batteries will soon be everywhere: they’re better than lithium in almost every way.

But the US is lagging behind. It’ll take miners like UBMCF to close the gap.

The contest over Vanadium will only heat up as the mineral becomes more important to national security. And don’t forget that trade war with China: sooner or later, access to Vanadium could be limited. That should position UBMCF perfectly to be part of the next energy revolution.