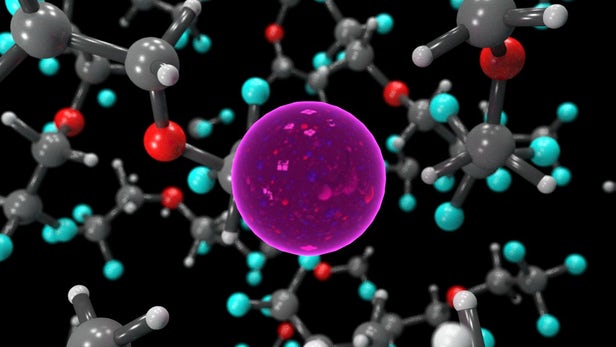 Fluoride is most commonly associated with healthy teeth, but a new study shows how it might be put to work in better batteries. Researchers at Caltech, JPL, Lawrence Berkeley National Lab and the Honda Research Institute have developed fluoride-based batteries that could potentially last much longer than existing lithium-ion-based devices.

Basically, batteries work by passing ions back and forth between a positive and negative electrode – the anode and cathode. Lithium ions have become the industry standard for most applications, but they’re far from the only ones. Other recent studies have found success using ions of sodium, magnesium or aluminum instead.

The idea to use fluoride as the charge-carriers in batteries has been around for decades, but it’s been difficult to pull off. Liquid electrolytes are needed to run the device at room temperature, but that brings new problems with it.

“Fluoride batteries can have a higher energy density, which means that they may last longer – up to eight times longer than batteries in use today,” says Robert Grubbs, co-author of the study. “But fluoride can be challenging to work with, in particular because it’s so corrosive and reactive.”

The team behind the new study say they’ve managed to crack the problem, figuring out a way to make fluoride batteries with a liquid electrolyte. Fluoride is an anion – a negatively-charged ion – which means it has greater energy density but is harder to stabilize. The trick to stabilizing the stuff turned out to be an electrolyte liquid known as bis(2,2,2-trifluoroethyl)ether (BTFE).

“For a battery that lasts longer, you need to move a greater number of charges,” says Simon Jones, corresponding author of the study. “Moving multiply charged metal cations is difficult, but a similar result can be achieved by moving several singly charged anions, which travel with comparative ease. The challenges with this scheme are making the system work at useable voltages. In this new study, we demonstrate that anions are indeed worthy of attention in battery science since we show that fluoride can work at high enough voltages.”

The team says the new design shows that fluoride is a viable charge carrier in batteries, and could help make for batteries that last much longer.

“We are still in the early stages of development, but this is the first rechargeable fluoride battery that works at room temperature,” says Jones.