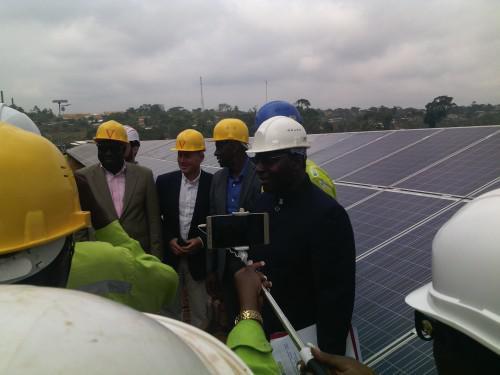 On January 25, 2018, Eneo has commissioned the first ever solar/thermal hybrid plant, in Cameroon, in Djoum, Southern Cameroon. With this infrastructure, built by the Spanish ELECNOR (CFA319 million), the electricity company moves into photovoltaic.

“With the commissioning of Djoum pilot project, we are demonstrating through deeds that sun shines for everybody and, we want to encourage local economic actors to invest in this new green energy which is now a genuine opportunity“, said Joël Nana Kontchou, managing director ENEO.

He explained that ENEO chose the hybrid plant for its first solar project because this solution would help save operating costs and guarantee energy supply.

With a field of 600 solar panels, the largest till-date in Cameroon, Djoum solar park will produce 186 KW and, it is combined with a 1,115 KW thermal plant.

“Specifically, in Djoum, during daytime, we inject both thermal and solar power in the electric grid. The fuel saved can thus be used to meet the demands. Moreover, the operational time of the thermal plant is reduced. This limits the risks of outbreaks and thus allows an improved availability of the machines”, explained Eugène Ngueha, director of technical activities at ENEO Cameroon.

The company revealed that it had already conducted studies on six other sites, Lagdo, Garoua, Lomié, Bertoua, Yokadouma, and Ngaoundal namely. ENEO’s solar programme should create hybrid plants at the isolated thermal plants installed in those regions.

Moreover, Joël Nana Kontchou said 3 solar plants with 35 MW generating capacity would be installed in the northern region, this region being the most isolated, according to a research conducted by the electricity regulatory agency. In detail, it would be a 10 MW plant in Guider, 10MW in Ngadoundéré and 15 MW in Maroua.

Eneo estimated that these solar plants whose procurement procedures were ongoing would be operational by March- April 2019.