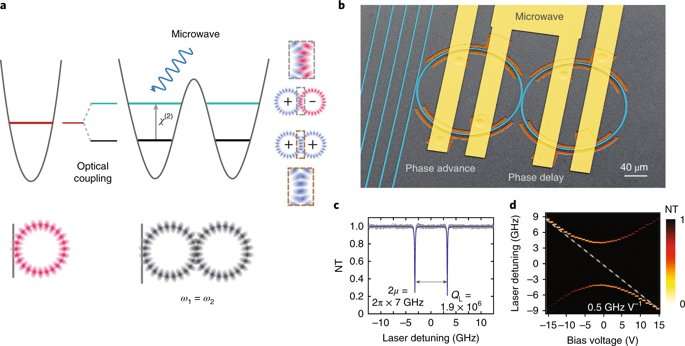 Physical systems with discrete energy levels are ubiquitous in nature and form fundamental building blocks of quantum technology. Artificial atom-like and molecule-like systems were previously demonstrated to regulate light for coherent and dynamic control of the frequency, amplitude and the phase of photons. In a recent study, Mian Zhang and colleagues engineered a photonic molecule with two distinct energy levels, using coupled lithium niobate micro-ring resonators that could be controlled via external microwave excitation. The frequency and phase of light could be precisely operated by programmed microwave signals using canonical two-level systems to include Autler-Townes splitting, Stark shift, Rabi oscillation and Ramsey interference phenomena in the study. Through such coherent control, the scientists showed on-demand optical storage and retrieval by reconfiguring the photonic molecule into a bright-dark mode pair. The dynamic control of light in a programmable and scalable electro-optic system will open doors for applications in microwave-signal processing, quantum photonic gates in the frequency domain and to explore concepts in optical computing as well as in topological physics.

The results are now published on Nature Photonics, where Zhang et al. overcame the existing performance trade-off, to realize a programmable photonic two-level system that can be controlled dynamically via gigahertz microwave signals. To accomplish this, the scientists created a microwave addressable photonic molecule using a pair of integrated lithium niobate micro-ring resonators patterned close to each other (radius 80 μm). The combined effects of low optical loss, efficient co-integration of optical waveguides and microwave electrodes allowed the simultaneous realization of a large electrical bandwidth (> 30 GHz), strong modulation efficiency and long photon lifetime (~2 ns).

A photonic analogue of a two-level system can typically facilitate the investigation of complex physical phenomena in materials, electronics and optics. Such systems convey important functions, including unique on-demand photon storage and retrieval, coherent optical frequency shift and optical quantum information processing at room temperature. For dynamic control of photonic two-level systems, electro-optic methods are ideally suited due to their fast response, programmability and possibility for large-scale integration.

For electro-optic control of a two-level system, the photon lifetime of each energy state must be longer than the time required for the system to be driven from one state to the other. Conventional integrated photonic platforms have not met the requirements of a simultaneously long photon life-time and fast modulation so far. Electrically active photonic platforms (based on silicon, graphene and other polymers), allow fast electro-optic modulation at gigahertz frequencies but suffer from shorter photon lifetimes. However, pure electrical tuning is still highly desirable, as narrowband microwave signals offer much better control with minimal noise and scalability.

In their work, Zhang et al. showed that optical transmission of the photonic molecule measured using a telecom-wavelength laser, supported a pair of well-defined optical energy levels. The evanescent coupling of light from one resonator to another was enabled through a 500 nm gap between the micro-ring resonators to form the two well-resolved optical energy levels. The scientists explored the analogy between an atomic and photonic two-level system to demonstrate control of the photonic molecule.

In the experiments, light from the tunable telecom wavelength laser was launched into the lithium niobate waveguides and collected from them via a pair of lensed optical fibres. The scientists used an arbitrary waveform generator to operate microwave control signals before sending them to electrical amplifiers. The efficient overlap between microwaves and optical fields observed in the system enabled higher tuning/modulation efficiency than those previously observed with bulk electro-optic systems. Such coherent microwave-to-optical conversion can link electronic quantum processes and memories via low-loss optical telecommunication, for applications in future quantum information networks.

Zhang et al. next used a continuous-wave coherent microwave field to control a photonic two-level system. In this system, the number of photons that could populate each of the two levels was not limited to one. The splitting frequency of the system was precisely controlled up to several gigahertz by controlling the amplitude of the microwave signals. The effect was used to control the effective coupling strength between the energy levels of the photonic molecule. Coherent spectral dynamics in the photonic molecule were investigated for a variety of microwave strengths applied to the photonic two-level system. The scientists also described the controlled amplitude and phase of the system using Rabi oscillation and Ramsey interference, while using Bloch spheres/geometric representations of the photonic two-level energy system to represent the phenomena.

The work allowed controlled writing and reading of light into a resonator, from an external waveguide to achieve on-demand photon storage and retrieval, a critical task for optical signal processing. To facilitate this experimentally, Zhang et al. applied a large DC bias voltage (15 V) to reconfigure the double-ring system into a pair of bright and dark modes. In the setup, the mode localized in the first ring provided access to the optical waveguides and became optically bright (bright mode). The other mode was localized in the second ring that was geometrically decoupled from the input optical waveguide to become optically dark. Accordingly, the scientists demonstrated coherent and dynamic control of a two-level photonic molecule with microwave fields and on-demand photon storage/retrieval through meticulous experiments in the study. The work opens a path to a new form of control on photons. The results are an initial step with potentially immediate applications in signal processing and quantum photonics.

The design parameters of the coupled resonators provide space to investigate the dynamic control of two-level and multi-level photonic systems, leading to a new class of photonic technologies. The scientists envision that these findings will lead to advances in topological photonics, advanced photonic computation concepts and on-chip frequency-based optical quantum systems in the near future.