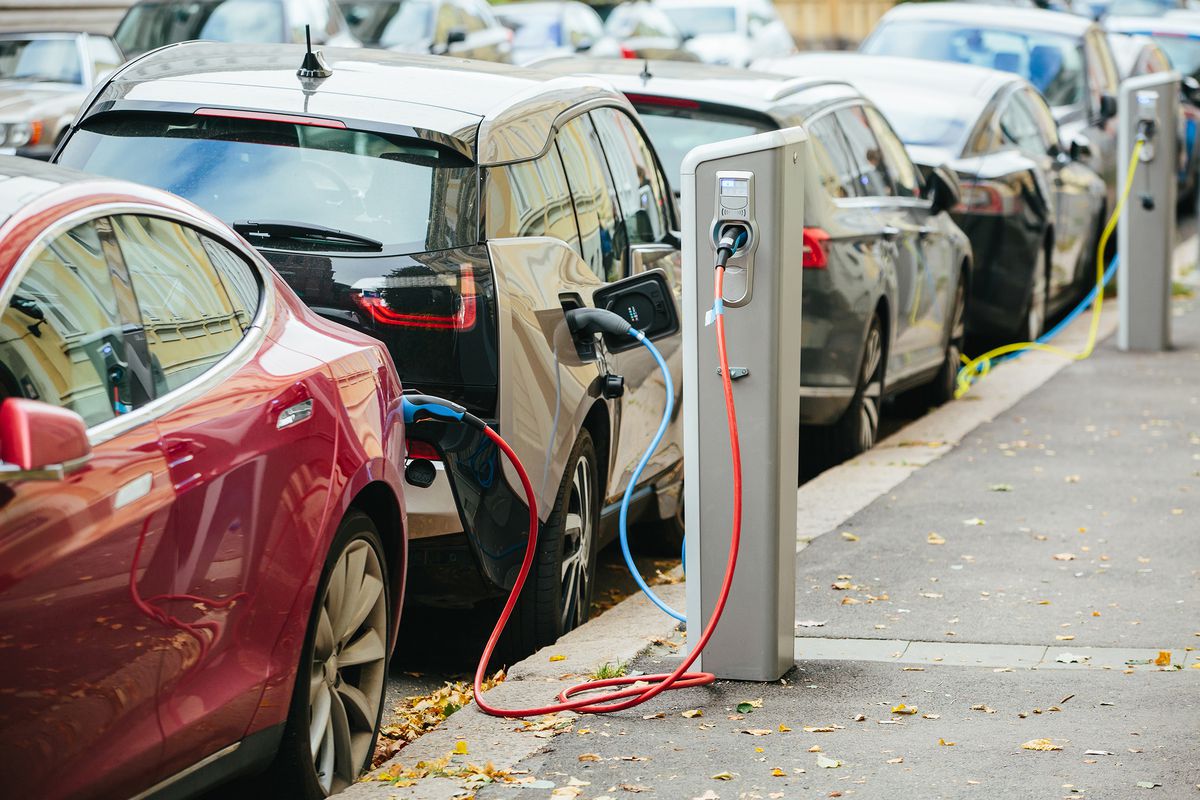 Though it may seem like several dozen scandals ago, the Trump administration is just now finalizing plans to freeze national fuel-economy standards in place, rather than steadily increasing them as Obama planned.

This is a terrible idea, for reasons I have detailed at length — it will cost consumers more, ensure more air and climate pollution, and, obviously, yield less fuel-efficient vehicles. It’s a bad idea economically, environmentally, and in terms of America’s international reputation.

I’m not going to go through all that again, though. Instead, in this short post, I want to do two things: point out a fact about the political calculations of this plan, namely, that it is opposed by the very corporate entities for which it was designed; and, second, make a bold prediction about the effect of electric vehicles on this fuel-economy debate. Basically, I think EVs are going to render the whole dispute moot!

Car companies have acted with grotesque dishonesty throughout the history of the fuel-economy debate. It was only when Obama bailed them out — literally saving them from bankruptcy — that they agreed to come to the table to work out increased national standards.

When Trump took over, they immediately reversed course and, like jackals, descended on the new administration, pleading for regulatory relief, for a few more years of SUV profits.

The administration has been holding public hearings on its proposal, and not surprisingly, it has received a torrent of opposition from the usual suspects — environmentalists, health groups, California. What is somewhat surprising is that considerable opposition has come from the auto companies themselves. (Also speaking out against, Axios reports: Shell Oil! When you’ve lost Shell …)

Ford has opposed it, along with the United Auto Workers. “Let me be clear,” said Bob Holycross, Ford’s global director of Sustainability & Vehicle Environmental Matters. “We do not support standing still.” GM and Chrysler have also lobbied the administration to alter its plans.

The Alliance of Automobile Manufacturers, a major automaker trade group, has also opposed the plan. “We support standards that increase year over year,” said AAM CEO Mitch Bainwol at a hearing.

“The industry is united in its request that the agencies work out an agreement with California” for a single, rising national standard, Honda said in recent comments.

As for Trump’s plan? “We didn’t ask for that,” Robert Bienenfeld, Honda’s assistant vice president in charge of environment and energy strategy, told the New York Times. “The position we outlined was sensible.”

So why are automakers nervous and pushing back? Several reasons.

First, they had hoped for a subtle weakening of standards, mostly outside public view. Instead, the Trump administration is loudly and brashly nuking standards entirely, doing everything it can to brand itself a corporate-friendly environmental villain (with help from its environmental opposition, of course). Automakers don’t want to be seen as environmental villains! Unlike Trump, they don’t want to alienate the 70 percent of Americans who aren’t hardcore conservatives. (Something about “lying down with dogs” seems apropos here.)

They also don’t want to wait for years while the federal government and California battle it out in the courts over whether the feds will be able to revoke the state’s waiver under the Clean Air Act, which allows it (and 12 other states that follow it) to set its own air quality standards, including for vehicles.

Given that California is likely to win that legal fight (though with Brett Kavanaugh on the Supreme Court, one never knows), the industry really, really doesn’t want to make two sets of cars — one for low-standard states and one for California and its high-standard brethren, which represent over half the national market.

And finally, there’s one other reason, which brings us to the latest remarkable development, and my prediction.

The development: General Motors, the largest US automaker, has proposed a national Zero Emission Vehicle (ZEV) mandate, similar to the one operating in California.

This is one of those developments in the energy world that sounds almost reasonable now, based on incremental shifts taking place over the last several years, but if you’d told anyone a decade ago that it would happen, you’d be dismissed as a lunatic. I mean, do you remember the semi-famous 2006 documentary Who Killed the Electric Car? GM was the villain in that movie — they killed it!

Now GM is proposing, as Green Car Congress describes it, “the establishment of annual requirements that electric vehicles and plug-ins make up 7 percent of the market in 2021 and increase 2 percent each year, to eventual targets of 15 percent by 2025 and 25 percent by 2030.”

In and of itself, that’s not a hugely ambitious target. Depending on who you believe, EVs could well be 30 to 40 percent of new vehicle sales in the US by then, with or without a mandate. Here, via Jeffrey Rissman of Energy Innovation, are projections by Bloomberg New Energy Finance (BNEF), Energy Innovation’s Energy Policy Simulator (EPS), and the Energy Information Administration (EIA).

Putting aside EIA’s ludicrously pessimistic prediction (it has a long history of lowballing clean energy tech projections), you can see that analysts are incredibly bullish — and getting more bullish every year — about EV growth. In some cities, talk has already turned to banning internal combustion engine vehicles entirely.

Still, the fact that GM is proposing an EV mandate at all is a big deal.

Among other things, it reveals the automakers’ final fear about Trump’s plan. If it passes, they will have no short-term incentive to innovate or improve the environmental performance of gas cars. Instead, there will be intense pressure from shareholders to make more of the SUVs and trucks that represent the lion’s share of their profit. (Ford is ditching cars almost entirely.)

Which is fine, for a while. But automakers know that an EV revolution is coming. If they don’t get ahead of it — if they screw around with fancier pickup trucks for the next 5 to 10 years — they will be caught flat-footed, scooped by rivals like Tesla and their European counterparts. (Volvo is ditching gas engines almost entirely.)

They do not want to be caught flat-footed. They want to be forced to innovate; only performance standards can do that.

And that brings us, at last, to my prediction.

EVs are going to render the CAFE debate moot

Federal CAFE (corporate average fuel economy) standards are worth fighting for as a short-term measure, but they are never going to get us where we need to go, i.e., to zero carbon. It is a flawed program in many ways (the Atlantic’s Robinson Meyer has an accounting in this great piece), and even when it’s working as intended, it is a torturously slow, stop-and-start accretion of incremental gains, each one the result of a vicious battle. At this rate, it will take us forever.

The only way to fully decarbonize personal transportation is a) to drive less and b) to shift entirely to electric vehicles, hooked up to a zero-carbon grid.

Especially in states like California (and my home state of Washington), with ambitious carbon-reduction goals and low-carbon electricity grids, there is no way around it: decarbonization means tackling cars.

The logic behind EVs is inexorable. It’s why BNEF keeps revising its already optimistic forecasts for EVs upward every year. It’s why electric alternatives are popping up from long-haul trucks to city buses to scooters. It’s why cities all over the world are taking steps to reduce or eliminate cars from public spaces. It’s why China, India, France, and Britain have all discussed plans to ban diesel and gasoline cars entirely, and at least eight other countries have EV targets in place.

The Koch brothers and the groups they fund are fighting EV programs and incentives at the state level (even fighting against electric buses) and lobbying to repeal the existing federal EV tax credit. And of course they support Trump’s plan on fuel economy. They will fight the decline of fossil fuels in the transportation sector every step of the way.

Nonetheless, I think they will lose. I’m betting on the distributed innovation that is currently improving EVs and batteries at a rapid clip, and on the learning that will come from economies of scale soon.

My prediction is that EVs will come on so strong that they will lower transportation-sector carbon emissions faster than CAFE standards ever could have. It’s not that CAFE standards aren’t worth fighting for as a backstop, but in my view, acceleration of EVs is the climate priority. (Actually, revise that: reducing dependence on cars is the climate priority; electrifying vehicles is priority No. 2.)

Just as I lived to see, much earlier than I ever expected, the costs of new renewable energy decline to the point that they are frequently lower than the costs of running existing fossil fuel plants, so too I think I will live to see the costs of a new EV decline below the existing maintenance and operational costs of a gasoline or diesel vehicle — especially as oil prices rise and new regulations and mandates come into place across the world. China alone will guarantee it.

When that happens, we will wonder what the fuss over CAFE was all about.