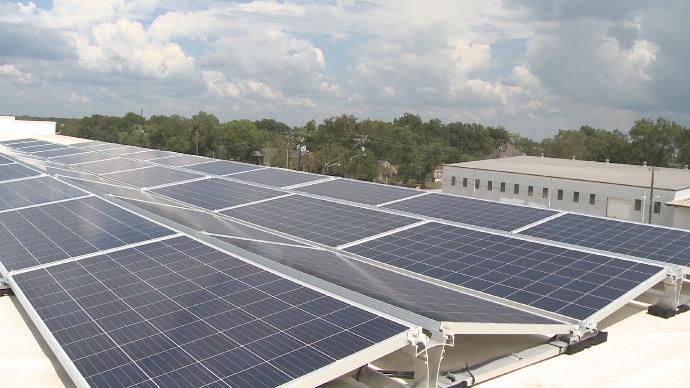 A new residential and commercial property in downtown Bryan is making its own electricity.

Local installers say the green energy is a trend that seems to be catching on.

When the sun is shining bright, the Perry Place lofts in downtown Bryan is producing 40,000 watts of instantaneous power.

That’s enough electricity to power 4 homes. The residential loft and business space is the third property owned by Brent Hairston that operates under solar power.

“It just seems to make sense to capture the energy that’s coming down from the sky each day,” said Hairston.

Hairston says the solar panel system on top of his 30 thousand square foot building may be one of the largest in the Brazos Valley.
“Economically it’s good because it has a 7 to 10 year pay off,” said Hairston. “After that, we’ll be making the power for free.”

Adam Burke of Texas Green Energy installed the system and says he’s noticed a lot of commercial businesses catching the solar trend because of a federal tax credit.

“There is this dollar-for-dollar tax credit of 30 percent plus depreciating the cost that they put into the system in the first place,” said Burke.
Hairston says his tenants indirectly benefit from the solar power because the common areas and the first floor are powered by the panels.

“If we need more power than the solar system is creating we’ll draw from the grid,” he said. “If we’re producing more power than we need than the excess power will go back into the grid.”
Hairston says that helps him offset the cost of the electric bill.

Burke says the average homeowner can get a system for around 20 thousand dollars in most cases, that system would offset a hundred percent of their electricity bill. Homeowners also have access to the tax credits.