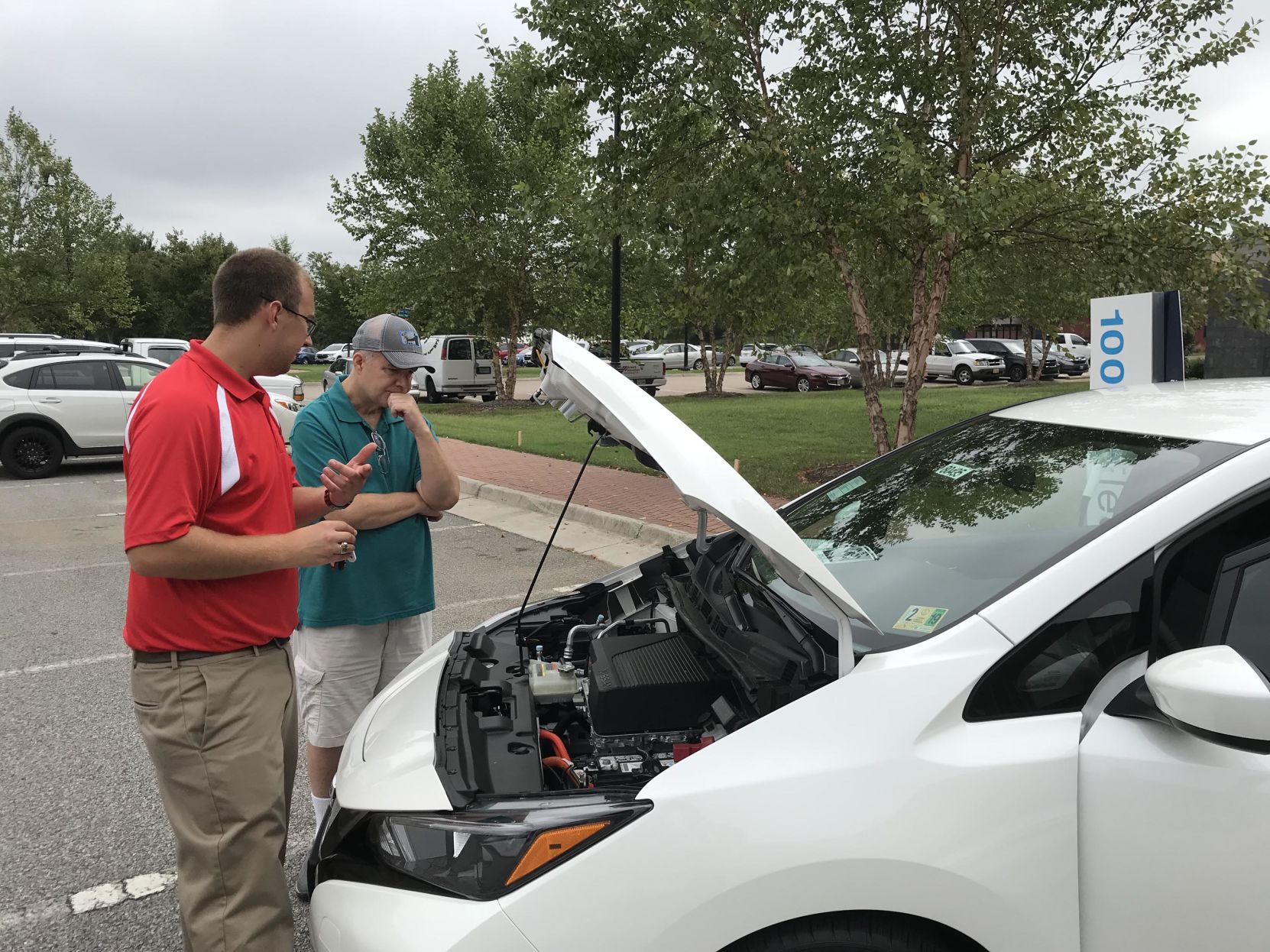 A Saturday drive in an electric vehicle at Danville’s Community Market yielded a smooth and quiet but peppy ride with surprisingly powerful performance.

The Nissan Leaf was so silent it was hard to tell when the car started and nothing but the wind could be heard as it traveled down Goodyear Boulevard.

Held by Danville Utilities, the Danville Plugs In event included the unveiling of the city’s first public electric-vehicle charging station and an opportunity for area residents to learn more about electric vehicles.

The city has four Nissan Leaf electric vehicles — two for Danville Utilities and the other two used by City Hall, Grey said. City government has had its own charging stations but they are not for public use.

The 147-horsepower Leaf demonstrated Saturday had regenerative braking that added charge to the battery whenever the brake was applied.

Danville Plugs In featured not only one of Danville Utilities’ Nissan Leaf electric vehicles, it included electric and hybrid cars from Nissan, Honda and Toyota dealerships and individual owners as well.

The average owner of a conventional gas-burning vehicle spends about $2,000 a year on fuel, Grey said, but the driver of an electric vehicle will only pay about $500 to power their car annually.

The recently retired Hogue said he hasn’t had a car for two years and was looking for a new or used electric or hybrid vehicle.

“I like the idea that these are more economical,” Hogue said.

The advantages of electric cars are that they eliminate the need to buy gas and they lead to fewer emissions into the environment.

But since it can take hours to recharge a battery, Hogue said he was leaning toward getting a hybrid gas/electric car.

“I’d hate to be in the middle of somewhere and not be able to recharge,” Hogue said.

Nissan Sales Associate Casey Keeter said the Nissan Leaf will travel 150 miles on a full charge, and it takes about 7 ½ hours to fully charge the battery when it’s plugged into the wall of your home.

But if the driver happens to be on the highway heading to Greensboro, for example, they will know where to recharge the battery.

Other cars at the event included a 2018 Honda Clarity Hybrid and a 2018 Toyota Prius Hybrid from dealerships in the city. One owner brought his Kia Niro and another showcased an all-electric 2018 Tesla Model 3.

“It looks amazing,” Hudson said when asked what he liked about it. “I’m an engineer, so I just like efficiency. It’s efficient, it’s fast and it looks great.”

While it can take longer to recharge depending on the outlet, a Tesla supercharging station will fully recharge his vehicle’s battery in 90 minutes, Hudson said.

As for the city’s new public charging station, it is free and can be used by anyone an hour at a time, Grey said. In addition, solar panels installed on top of the Community Market building about 10 years ago provide energy for the charging station.