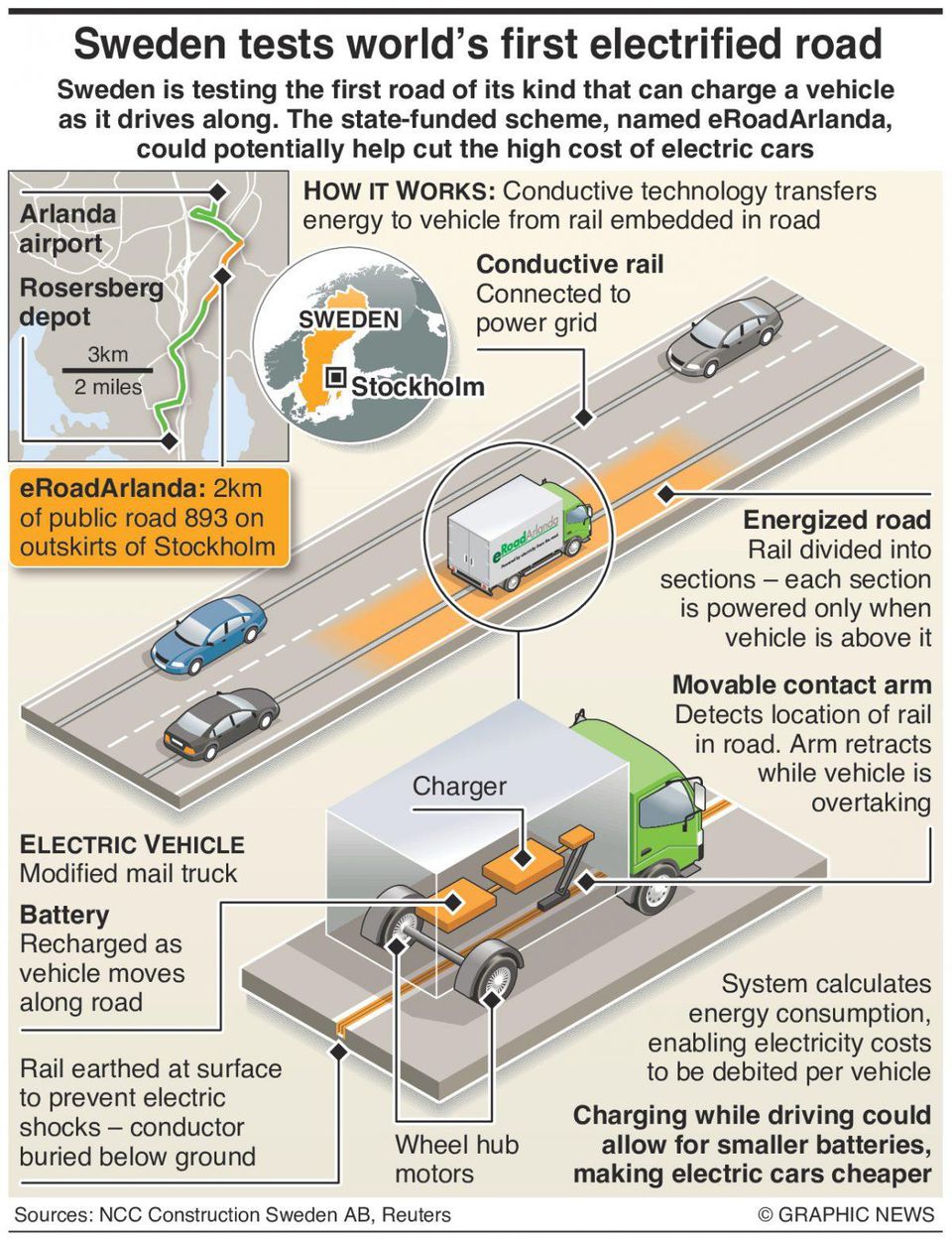 The dream is that Sweden’s electrified road, which can recharge electric vehicles as they speed overhead, could be the magic bullet that shoots down the two biggest barriers to electric cars – the huge cost of their batteries and range anxiety.

The world’s biggest auto makers have all (except perhaps Fiat Chrysler Automobiles) bet the ranch trying to make bigger and better batteries. The goal is to make everyday electric cars as flexible and user friendly as internal combustion engines. The trouble is, the huge costs make electric vehicles unaffordable for most people. Currently, only the rich can afford Teslas. Smaller, cheaper cars like the Nissan Leaf still need big government subsidies to make them attractive to regular buyers. Then there is the range anxiety, which makes out-of-the-ordinary longer trips just too demanding for the technology. Sure, a recharging infrastructure is slowly being built, but the expense of this, and the time it takes to fill your car suggest this won’t be trouble free.

What if you could charge your electric car as it cruised down the highway? At a stroke both problems would be solved. Batteries could be smaller and cheaper, and it would be easy to recharge the battery for long journeys. You would simply point your vehicle over the appropriate lane in the road. It would make contact with the electric current under the road. You would not even need to slow down.

That’s the dream of Hans Saell, a spokesman for the Swedish eRoadArlanda project. He believes pushing electricity into cars from a connection under the road, currently aimed at trucks, could be scaled up to cars.

Dream on, said Wolfgang Bernhart, partner at German automotive consultant Roland Berger. The economics don’t work, and vehicle manufacturers are well on the way anyway to providing attractive electric cars for the masses.

But the eRoadArlanda project, which links electric trucks to Stockholm airport and a local distribution centre is well on the way to proving that the electrified highway works.

ERoadArlanda is backed by Swedish state owned energy provider Vattenfall, Elways, an innovation outfit, and the construction and infrastructure company NCC. It uses Elways’ patented technology. Saell is CEO of the eRoadArlanda consortium and Business development manager at NCC.

Saell believes the concept is capable of scaling up for widespread adoption and could well lead to main highways across Europe being fitted with the technology.

“We definitely believe this is very scalable. If you electrify the highways, manufacturers can use smaller batteries and it takes away range anxiety, and it costs less than 1 million euros per kilometre ($1.2 million) per kilometer. The cost of a tramway for instance is at least 50 times higher,” Saell said in an interview.

The electric power would be accessed from under the road safely, using a thin connector, in contrast to the exposed third rail often used to power electric trains. The vehicle would detect when a section of the highway was set up for recharging and automatically make the connection with a moveable arm, without cutting speed.

Experts were sceptical about the impact of the development on the wider world of electric cars.

Nicolas Meilhan, analyst with Frost & Sullivan in Paris agrees this would be prohibitively expensive.

“We won’t really have the money to invest in this kind of massive infrastructure project. Better to use what we already have more efficiently. If you want to electrify trucks, put them on trains. Curb private cars in cities and make better use of public transport, walking and cycling. Use plug-in hybrids for long distance driving and lightweight small electric cars for commuting,” Meilhan said.

Roland Berger’s Bernhart sees a limited application of the technology perhaps to non-public roads or defined routes to airports.

“I don’t see it for cars, at least not until the mid 2020s. I don’t see the economics of this . The costs are simply too high,” Bernhart said.

Bernhart reckoned by the middle of the next decade battery cars, although more expensive than internal combustion engine ones, will be gaining in competitiveness. The range of family sedans will be an adequate 280 to 320 miles, with a fast charging infrastructure in place.

Other manufacturers are also exploring electrified roads. Renault of France, with Qualcomm Technologies and Vedecom, a French research firm, have been looking at so-called dynamic wireless charging, which would allow cars to be recharged from pads embedded in the road.

Meanwhile testing on electric trucks at eRoadArlanda started in April and will last at least 12 months.

“This could be commercialized within 5 to 10 years in Sweden and will allow much smaller batteries to be used. The cost of batteries today is more or less half the price of the car and with this technology batteries would be half the size or smaller than those today,” Saell said.

The electrified road would augment other ways of charging including wireless technology which could be used while cars are parked, and the traditional plug-in methods.