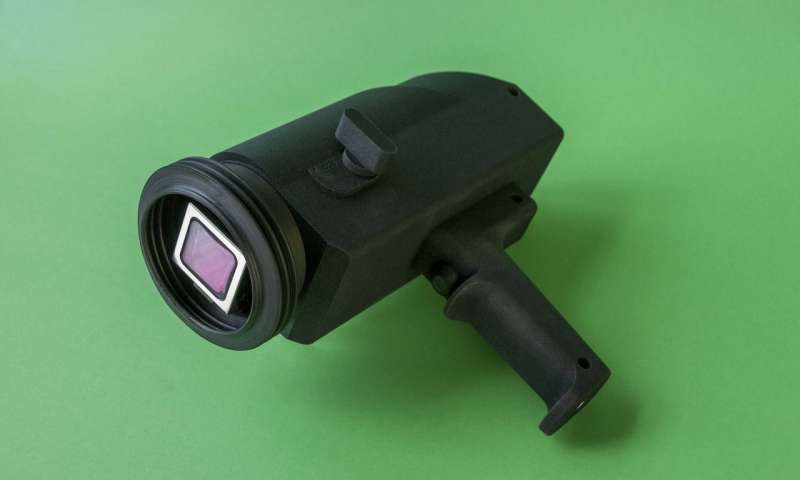 In combination with the right materials, sunbeams can work wonders: they clean building facades and decompose pollutants from the air or in the water. The magic word is photocatalysis. In practice, though, the effectiveness of this “miracle cure” fluctuates greatly, depending on the material used and the environmental factors. With a new measuring device, researchers now want to determine the photocatalytic effectiveness of surfaces more accurately and quickly, thereby increasing efficiency.

Driving bans, diesel retrofitting or the blue badge – there is currently a lot of discussion about how to reduce nitrogen oxide and particulate matter in cities. How practical would it be if house facades and roofs would simply clean the city air in passing? And if buildings could free themselves of dirt right away? The good news is that this is already possible with photocatalysis. When building materials are mixed with a so-called catalyst such as titanium dioxide (TiO2), sunlight in combination with oxygen triggers a chemical reaction. The titanium dioxide forms reactive substances that decrease dirt and pollutants. Whether concrete, glass or facade paint, almost every material can be upgraded with photocatalytic technology.

There are several pitfalls, though: depending on the substrate, surface structure and environmental influences, the photocatalytic efficiency varies by up to 100 percent or more, depending on the pollutant and product. The effectiveness is also a matter of the right mixture: if only the surface is coated, the catalyst quickly washes off or erodes. If you mix it into the material, much of it is not effective. The optimum mixture has not yet been found. Moreover, the long-term behavior and stability of such building materials are difficult to predict outside of the laboratory.

Moreover, there is a high discrepancy between the efficiencies which are achievable in the laboratory and those obtained outside in practical use. These issues have barely been studied yet. A better understanding of these relationships was the goal of the eleven partners in the joint project PureBau. Their goal was to improve the efficiency of material compounds so that better photocatalytically active building materials can be developed.

A new tool for efficient research

As one of the partners, the Fraunhofer Institute for Surface Engineering and Thin Films IST in Braunschweig is working on a measuring method that makes this very thing possible. “The previous research and development of photocatalytically active building materials was often a trial-and-error process, due to the lack of a suitable measurement procedure. In addition, it was simply not possible to perform reliable measurements in the field. Although effects can be calculated using simulation, this process is laborious and, in addition to that, it’s not widely used”, says Frank Neumann, Head of Working Group Photocatalysis at the Fraunhofer IST.

Neumann and his colleagues had already patented a process to quickly and reproducibly measure the photocatalytic self-cleaning of products on a laboratory scale. This enables a determination of how quickly a material with a certain catalyst cleans a surface, such as a facade or a tiled roof. The basic principle: a luminescent dye is vapor-deposited onto a surface, and then the speed at which it fades under the influence of light is measured. From the parameters of light intensity and thickness of the dye layer, the efficiency can be determined.

From the laboratory to the field

The challenge now was to transfer this method to a portable device that works without vacuum conditions, while significantly accelerating the measurement. Through their collaboration with the Institute for High Frequency Technology (IHF) of the Technical University of Braunschweig, the researchers achieved this in two steps: since the dye synthesis that was used in the laboratory up until then displayed too many unwanted chemical reactions, they had to find new dyes. Dyes with europium-metal complexes were used, just like in OLEDs. In addition, the previous method of vapor depositing no longer worked for the mobile application. “Instead, we transferred the dyes in a mono-layer to a polymeric carrier and chemically combined both by means of so-called anchor groups,” Neumann explains. The backing film has the advantages of being well-suited to any surface, minimizing chemical reactions with the material and avoiding damage caused by measurements made directly on facades (e.g., dye transfer). The coating with a single layer of dye ensures the reproducibility of the process.

In the next step, a demonstrator of a mobile measuring gun was developed together with the company Omicron Laserage Laserprodukte GmbH. In a bayonet lock, the film is attached there with the dye coating and pressed onto the surface which is to be tested. The device then measures the decay of luminescence by the UV irradiation and determines the photocatalytic effectiveness – both qualitatively as well as quantitatively by the degree of efficiency. The measurement time in this procedure has been reduced to about 15 minutes, compared to relevant standard testing which can last up to three hours.

Neumann is confident that the measurement technique could be ready for the market in one to two years. This would be interesting for building material manufacturers, coating experts and measuring service providers, as well as for users: “Above all, it would finally be possible to control the quality of currently used products in the field, but it would also be possible to accelerate the development of effective photocatalytic materials”. In the long term, this in turn could promote the extensive self-cleaning of facades, roofs and traffic routes and ensure a better climate in our cities.