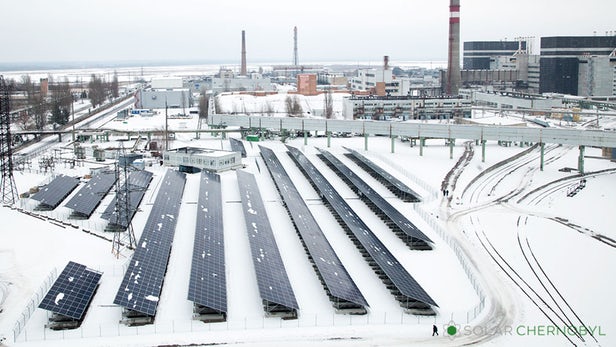 More than 30 years after the worst nuclear disaster in history, the Chernobyl area is once again producing power. From the (somewhat literal) ashes of the Nuclear Power Plant springs the Chernobyl Solar Power Plant, which was officially launched with an opening ceremony on Friday.

The Solar Chernobyl project is headed up by the Ukranian energy company Rodina and Enerparc AG in Germany. Over 3,700 solar panels are arranged over about 1.6 hectares (4 ac), sitting just 100 m (328 ft) away from Reactor 4, ground zero of the 1986 disaster. The new power plant has been feeding energy into the Ukraine power grid since July 1, about 18 years after the last of the nuclear reactors was finally shut down.

Solar is a logical choice for the area. The 2,600-km2 (1,000-mi2) Exclusion Zone is essentially sitting empty, unsafe to live in and unsuitable for farming – although the local wildlife seems to be enjoying our absence. As a bonus, much of the infrastructure needed to feed energy into the grid was already in place.

In its current form, the Chernobyl Solar Power Plant has a capacity of just 1 MW – a mere fraction of the 4,000 MW claimed by the old nuclear power plant. But besides the obvious safety benefits, there are plans to increase production to 100 MW in the future.