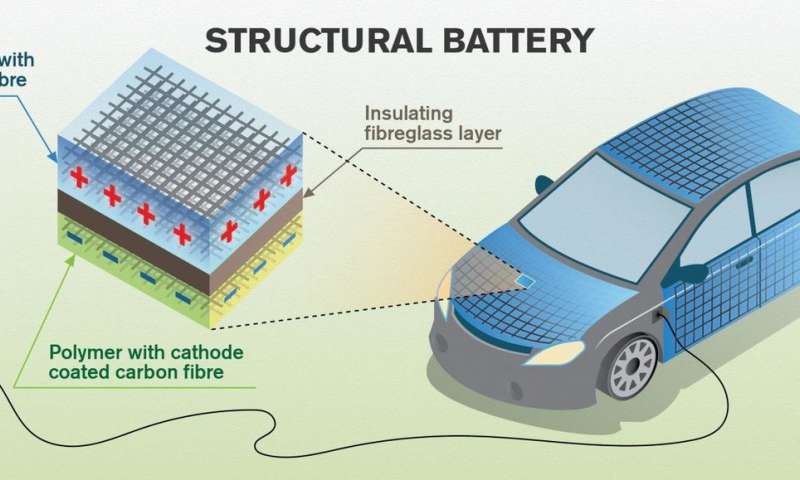 A study led by Chalmers University of Technology, Sweden, has shown that carbon fibres can work as battery electrodes, storing energy directly. This opens up new opportunities for structural batteries, where the carbon fibre becomes part of the energy system. The use of this type of multifunctional material can contribute to a significant weight-reduction in the aircraft and vehicles of the future—a key challenge for electrification.

Passenger aircraft need to be much lighter than they are today in order to be powered by electricity. A reduction in weight is also very important for vehicles in order to extend the driving distance per battery charge.

Leif Asp, Professor of Material and Computational Mechanics at Chalmers University of Technology, conducts research into the ability of carbon fibres to perform more tasks than simply to act as a reinforcing material. They can store energy, for example.

“A car body would then be not simply a load-bearing element, but also act as a battery,” he says. “It will also be possible to use the carbon fibre for other purposes such as harvesting kinetic energy, for sensors or for conductors of both energy and data. If all these functions were part of a car or aircraft body, this could reduce the weight by up to 50 percent.”

Asp headed up a multidisciplinary group of researchers who recently published a study on how the microstructure of carbon fibres affects their electrochemical properties—that is, their ability to operate as electrodes in a lithium-ion battery. So far this has been an unexplored research field.

The researchers studied the microstructure of different types of commercially available carbon fibres. They discovered that carbon fibres with small and poorly oriented crystals have good electrochemical properties but a lower stiffness in relative terms. If you compare this with carbon fibres that have large, highly oriented crystals, they have greater stiffness, but the electrochemical properties are too low for use in structural batteries.

“We now know how multifunctional carbon fibres should be manufactured to attain a high energy storage capacity, while also ensuring sufficient stiffness,” Asp says. “A slight reduction in stiffness is not a problem for many applications such as cars. The market is currently dominated by expensive carbon fibre composites whose stiffness is tailored to aircraft use. There is therefore some potential here for carbon fibre manufacturers to extend their utilisation.”

The researchers are collaborating with both the automotive and aviation industries. Leif Asp explains that for the aviation industry, it may be necessary to increase the thickness of carbon fibre composites, to compensate for the reduced stiffness of structural batteries. This would, in turn, also increase their energy storage capacity.

“The key is to optimise vehicles at system level—based on the weight, strength, stiffness and electrochemical properties. That is something of a new way of thinking for the automotive sector, which is more used to optimising individual components. Structural batteries may perhaps not become as efficient as traditional batteries, but since they have a structural load-bearing capability, very large gains can be made at system level.”

He continues, “In addition, the lower energy density of structural batteries would make them safer than standard batteries, especially as they would also not contain any volatile substances.”