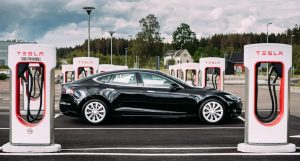 In case you haven’t noticed, cars everywhere are going electric. As more EVs hit the road over the next decade or so, what happens to all the old used batteries? While it’s not a big problem yet, it’ll be a huge one soon.

Roughly 10 million battery-powered vehicles are rolling around today, but some agencies predict that number will grow to over 200 million by the decade’s end. Considering that, EV battery recycling will be a massive task in the years ahead.

What Happens to Old EV Batteries?

The first commercial lithium-ion battery was released in 1991, and since then, the technology has improved by leaps and bounds. That said, Lithium-ion batteries remain a substantial environmental hazard and have a relatively short life cycle. Furthermore, the recycling process is complex, dangerous, and time-consuming.

Your typical EV battery can easily last for over 10+ years, and many modern EVs come with an 8-year battery warranty in the United States. That means Tesla, Ford, and others guarantee the battery for up to eight years or 100,000 miles.

Most EVs on the road aren’t that old yet, but they will be soon. As a result, we’re not entirely sure what manufacturers plan on doing with the increase of dangerous, toxic EV battery material.

How are old EV batteries recycled, or how are they stored while we figure out the best path forward? Are they safe, or are some leaking toxic chemicals into the ground? We’re not sure.

Tesla, the most popular EV manufacturer as of late, claims that it can recycle and reuse up to 92% of an old EV battery. The company has an EV sustainability and recycling support page that suggests, “none of our scrapped lithium-ion batteries go to landfilling, and 100% are recycled.”

That’s promising and suggests that Tesla recycles and reuses everything, but that sounds too good to be true. Tesla is just one of many manufacturers which will face a vast battle later down the road. Because, again, lithium-ion batteries, like other electronics, are toxic.

The Process is Difficult

If we haven’t made it clear yet, handling, storing, and eventually recycling EV batteries will be a huge undertaking. Manufacturers everywhere are talking about how EVs are good for the environment and cleaner than gas, but what about the massive battery packs powering everything?

According to the site TreeHugger, battery recycling is performed one pack at a time. Auto manufacturers use powerful glue to keep everything safely together, which must be broken down. As a result, the battery cells get shredded, heated up to the point they burn, dissolve into a pool of acid, and more at special facilities. It’s a nasty job that releases carbon emissions, but that’s another topic entirely.

The other problem is that Lithium-ion and nickel aren’t even the most profitable part to recycle and reuse. That’s actually cobalt, an expensive material that’s in short supply. Tesla recently confirmed that half of its vehicles are now cobalt-free, and others are trying to do the same.

For now, battery manufacturers are busy trying to figure out ways to cut certain chemicals out of battery cells or find the best way to recycle and reuse as much as possible.

Considering most EVs on the roads are still young, the batteries inside don’t need to be recycled yet. But, as we inch closer to that reality, manufacturers and companies everywhere are trying to figure out a solution.

For example, Ford teamed up with a recycling company known as Redwood Materials, founded by Tesla’s ex-CTO JB Straubel. The auto-maker recently invested $50 million in Redwood Materials and will give them a place to send old batteries while trying to be as sustainable as possible.

Redwood Materials is located in Carson City, Nevada, and has a plan in motion with Ford and Volvo to recycle EV batteries in California, a leading state for EV ownership.

We’ve also seen an increase in start-ups that think they’re up to the task of recycling old EV batteries. One of those is Ascend Elements, which claims it can turn old lithium-ion batteries into new ones that are longer-lasting, charge faster, and are better for the environment. In addition, the company says, “our patented Hydro-to-Cathode™ process transforms today’s waste into high-value materials for tomorrow’s EV batteries — a giant step up in sustainability for the entire industry.”

Unfortunately, there is no quick fix, and this is only the beginning.