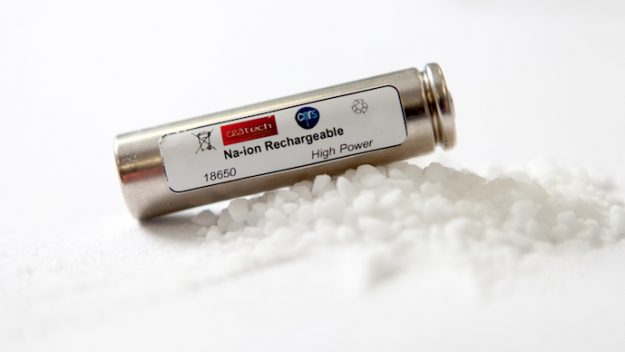 Lithium-ion batteries are the bane of electronics’ existence: expensive, resource-hogging, and energy intensive, they aren’t very sustainable in the long run.

But sodium may be.

At least, scientists at the University of Birmingham hope so.

Researchers are swapping one element for another, according to a study published in the Journal of the American Chemical Society.

Sodium is inexpensive and can be found in seawater, making it “virtually limitless.” On the other hand, it is a larger ion than lithium, and may not fit well into our cherished pocket-sized devices.

It can’t, for example, squeeze between the carbon layers of a lithium-ion battery’s graphite anode.

So, the team needed to find new materials to help sodium-ion compete with lithium for capacity, charging speed, energy, and power density.

In 2016, senior Birmingham fellow Andrew Morris predicted how phosphorus would behave as an electrode. (Spoiler alert: it forms helices at intermediate stages of charging.)

Now, in collaboration with Lauren Marbella and Clare Grey from the University of Cambridge, Morris was able to verify and improve on those predictions.

Based on their research, sodium provides a volume of charge carriers seven times that of graphite for the same weight—good news for the future of high-capacity sodium-ion anodes.

“This is a huge win for computational materials science,” Morris said in a statement. “It’s amazing how powerful combined theory-experimental approaches are.”

A soft, silvery-white, highly reactive metal, sodium is an alkali metal; it is the sixth most abundant element in the Earth’s crust, and exists in numerous minerals like feldspars, sodalite, and rock salt (NaCl).

But can it compare to sulfur—the proposed secret to next-generation battery technology?

By adding sulfur to lithium, manufacturers can create a power unit that’s cheaper, lighter, more environmentally friendly, and able to hold three to five times the charge of lithium-ion alone.