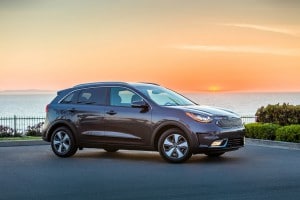 It’s not always easy being green, as Kermit the Frog was fond of saying. Sales of environmentally friendly vehicles have lagged in an SUV-focused market. But at least three automakers are hoping they can gain a little momentum thanks to the green car trophies they’re taking home this week.

The Kia Niro – which got a big send-up during last year’s Super Bowl thanks to a humorous Melissa McCarthy commercial – is one of a small but growing number of vehicles offered with a selection of different, low and no-emissions powertrains. The crossover initially debuted in hybrid and plug-in hybrid form and a prototype version of an all-electric Niro was unveiled at the Consumer Electronics Show in Las Vegas early this month. A production version is expected late in 2018.

“We’re thrilled to have received this special distinction from Green Car Journal,” said Orth Hedrick, Vice President of Strategy and Planning at Kia Motors America. “The Niro represents years of hard work by Kia to provide eco-conscious car buyers a vehicle that is fun, versatile, economical, and a pleasure to look at and drive.

While pricing hasn’t been revealed for the pure battery-electric model, the Niro hybrid starts at $23,340, with the plug-in at $27,900. That underscores the way manufacturers are trying to push down the price of battery-based technology to enhance the appeal of vehicles like the Niro. That said, a senior executive with parent Hyundai-Kia Motors also acknowledged during a CES presentation that almost all automakers now lose money on their electrified models.

That isn’t expected to change until at least the coming decade, when the price of lithium-ion batteries falls by as much as half, to anywhere from $70 to $100 per kilowatt-hour, according to the Boston Consulting Group. The consultancy recently estimated manufacturers are today spending as much as $200 per kWh for lithium technology.

Packing batteries into a mainstream vehicle is especially challenging, as there’s little profit margin to begin with. That may help explain why luxury brands seem to be more aggressive in going electric. Within just the last few months, a number of high-line brands have announced aggressive electrification programs, Infiniti this month saying that will include virtually every vehicle it builds by the end of this decade.

So, the choice for Green Luxury Car of the Year took some observers by surprise – the Karma Revero topping a list of finalists that also included the BMW 530e, Cadillac CT6 Plug-In, Lexus LS 500H and Porsche Panamera 4 E-Hybrid.

“We designed the Revero to strike an elegant balance between design and advanced electric technology,” said Jim Taylor, Karma Automotive’s Chief Revenue Officer. “This award confirms we are on the right path.”

The name, Karma Revero might confuse some folks. The sleek electric sports coupe originally debuted as the Fisker Karma, but that company went broke in 2011 and its assets were sold off to a Chinese automaker that brought the bankrupt firm back as Karma, renaming the car itself Revero. It recently went through a series of modest updates to its exterior and interior design and powertrain.

Cadillac didn’t drive off empty-handed. It’s flagship CT6 Plug-in sedan took the third enviro-trophy at the Washington Auto Show, this one for Connected Green Car of the Year. The award reflects the vehicle’s extensive range of onboard electronics, including the new Super Cruise system which allows limited hands-free driving.

“Technology and innovation have always been at the core of Cadillac,” said Cadillac CT6 Launch and Lifecycle Manager Eric Angeloro, adding that the new model, “Changes the expectations of what a hybrid can be.”

Caddy is actually one of more than a half-dozen manufacturers to offer some form of semi-autonomous technology for the 2018 model-year.

The announcement of the Green Car awards in Washington completes the cycle that began at the 2017 Los Angeles Auto Show last November. During a ceremony there, the new Honda Clarity was named Green Car of the Year. Like the Niro, it will be offered in three different versions, including a plug-in hybrid, an all-electric model and as a hydrogen fuel-cell vehicle.