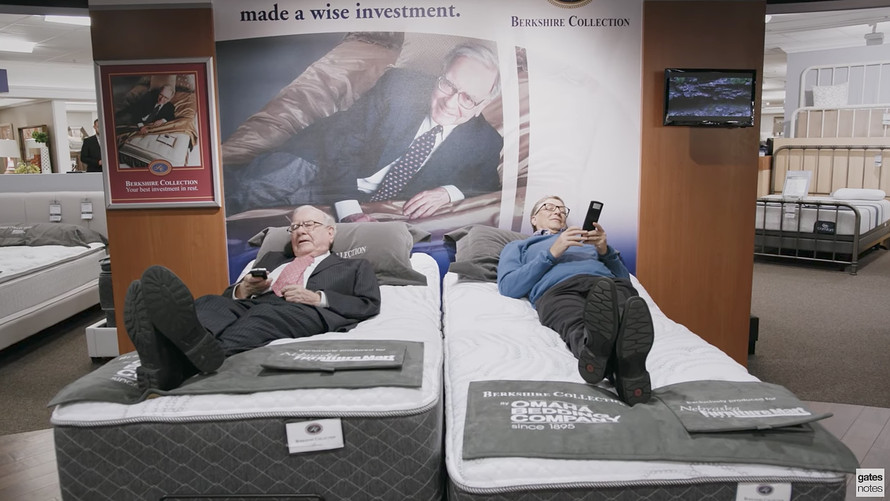 Two titans of business took a tour of a mattress factory and seemed to be having the time of their lives. And that merry jaunt during Berkshire Hathaway’s BRK.A recent annual shareholders weekend is not unrelated to why they’re both billionaires. Warren Buffett and Bill Gates chat and laugh, as they loll about the Buffett-owned Nebraska Furniture Mart in Omaha, Neb.

“My real vocational goal was to be a mattress tester,” Buffett told Gates in the video posted online this week. “I thought that would be a terrific job.” (Instead, he bought the company.) When asked if he could remember buying his first mattress, the Oracle of Omaha answered, “Well, I didn’t do much of the purchasing in our family. I can’t recall ever buying anything, actually.”

But Buffett and Gates agreed on one thing that drove their success. They did something they enjoyed: Buffett — investing and finding good deals (rather than shopping) and Gates — building computers and software. “Building Microsoft was incredibly fun and because we were right about software we had the wind at our back,” the co-founder of Microsoft MSFT said.

The chairman of Omaha-based Berkshire Hathaway said it’s critical to choose a profession or vocation that you love. “Being successful in almost anything means having a passion for it,” Buffett said. “If you see someone with even reasonable intelligence and a terrific passion for what they do, and get people around them to march even when those people can’t see over the top of the next hill.”

It’s something that other successful entrepreneurs always look for in potential investors. Case in point: Max Gunawan, founder of a San Francisco-based Lumio, an LED lighting company, appeared on ABC’s “Shark Tank” in 2014 to seek investment after raising $578,000 on Kickstarter. He asked billionaire Mark Cuban and the other sharks for $250,000 for an 8% equity stake in his business.

The sharks loved the product, but they were also impressed that Gunawan spent four months camped out at his factory in China perfecting the product. They knew he believed in his lights. All five sharks offered him a deal and he accepted $350,000 for a 10% equity in Lumio from investor and panelist Robert Herjavec. Lumio is now sold in high-end stores all over the world.

Not everyone agrees with the passion approach to finding success. As Cal Newport wrote in his book, “So Good They Can’t Ignore You: Why Skills Trump Passion in the Quest for Work You Love.” “If a young Steve Jobs had taken his own advice and decided to only pursue work he loved, we would probably find him today as one of the Los Altos Zen Center’s most popular teachers.”

“But he didn’t follow this simple advice,” Newport wrote of Apple’s AAPL, -0.24%  co-founder who died in 2011. “Apple Computer was decidedly not born out of passion, but instead was the result of a lucky break — a “small-time” scheme that unexpectedly took off. I don’t doubt that Jobs eventually grew passionate about his work.” (Or perhaps his passion was finding solutions to problems.)

Back in Nebraska Furniture, Gates and Buffett stumbled upon another money-making trick in retail. It’s easy to get in, but hard to get out. “How do we get out of here?” Gates asked. “Well, we don’t want you to get out of here. It’s well designed in that respect,” Buffett replied. “It’s like a casino,” Gates said. “Let me get oriented now,” Buffett replied. “The truth is I don’t know where we are.”