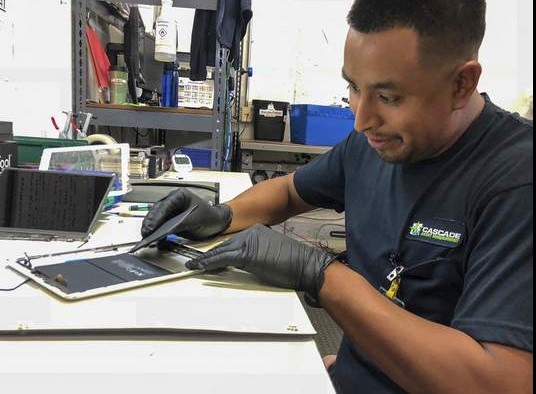 What happens to gadgets when you’re done with them? Too often, they explode.

As we enter new-gadget buying season, spare a moment to meet the people who end up handling your old stuff. Isauro Flores-Hernandez, who takes apart used smartphones and tablets for a living, keeps thick gloves, metal tongs and a red fireproof bin by his desk here at Cascade Asset Management, an electronics scrap processor. He uses them to whisk away devices with batteries that burst into flames when he opens them for recycling.

One corner of his desk is charred from an Apple iPhone that began smoking and then exploded after he opened it in 2016. Last year, his co-worker had to slide away an exploding iPad battery and evacuate the area while it burned out.

Around the world, garbage trucks and recycling centers are going up in flames. The root of the problem: volatile lithium-ion batteries sealed inside our favorite electronics from Apple, Samsung, Microsoft and more. They’re not only dangerous but also difficult to take apart – making e-waste less profitable, and contributing to a growing recycling crisis.

For all their benefits at making our devices slim, powerful and easy to recharge, lithium-ion batteries have some big costs. They contain cobalt, often mined in inhumane circumstances in places like the Congo. And when crushed, punctured, ripped or dropped, lithium-ion batteries can produce what the industry euphemistically calls a “thermal event.”

It happens because these batteries short circuit when the super-thin separator between their positive and negative parts gets breached. Remember Samsung’s exploding Note 7 smartphone? That was a lithium-ion thermal event.

Old devices end up in trouble when we throw them in the trash, stick them in the recycling bin, or even responsibly bring them to an e-waste center. There isn’t official data on these fires, but the anecdotal evidence is stark. Since the spring of 2018 alone, batteries have been suspected as the cause of recycling fires in New York, Arizona, Florida, Wisconsin, Indiana, Idaho, Scotland, Australia and New Zealand. In California, a recent survey of waste management facilities found 83 percent had at least one fire over the last two years, of which 40 percent were caused by lithium-ion batteries.

Statistically, the fire rates are low – 1 out of 3,000 mobile device batteries that Cascade handles experiences a thermal event. But when batteries spark other material, the result can be catastrophic. In 2016, the Shoreway Environmental Center that serves Silicon Valley suffered a 4-alarm fire it suspects was caused by a lithium-ion battery that went undetected amid other junk in its sorting systems. The fire damage cost $8.5 million.

There’s plenty of blame to go around. People shouldn’t carelessly throw battery-powered electronics into the bin. Local governments haven’t figured out good ways for us to hand off this common but dangerous material. Some gadget makers, including Apple, are taking steps to make recycling easier.

But ultimately, this is an environmental problem of the tech industry’s own design. And it’s time they own it.

It’s bad enough that lithium-ion batteries are dangerous. But often, gadgets designed to be thin and portable make the batteries especially difficult to remove.

Smaller gadgets with lithium-ion batteries like vape pens and headphones are more difficult to detect in a pile of waste, and can be even harder to disassemble. Apple’s wireless AirPods, for one, have been dubbed all but impossible to recycle by iFixit because they contain three batteries, each sealed inside plastic.

It’s more than just a safety issue, says Cascade’s CEO Neil Peters-Michaud. Gluing components together and hiding the batteries also makes recycling less profitable. For the training, safety precautions and effort that went into removing that iPad battery, Cascade will make about 50 cents to $1 in commodities. “Labor and time are money,” Peters-Michaud says.

“I just don’t understand why Apple doesn’t include design features that its users and the reuse-and-recycling community can benefit from to extend the life of their products safely,” he says.