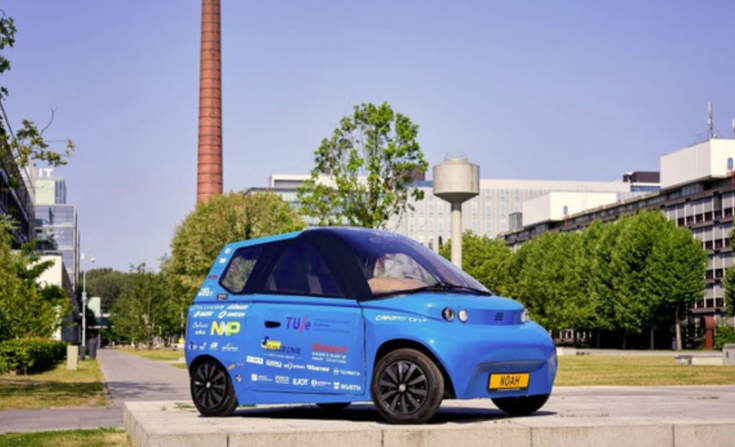 A “100 percent recyclable” electric car boasting a chassis and bodywork made entirely from natural and bio-based materials has been unveiled in the Netherlands by French oil and gas giant Total.

Hailed as a world first, the structural parts of the electric vehicle (EV) were made using no metal or traditional plastics, according to the development team at the University of Eindhoven.

Instead, it was built using light and strong sandwich panels based on natural fiber flax and a biopolymer — known as Luminy PLA — supplied by Total Corbian PLA. The company claims the material is recyclable and made from renewable resources, thereby offering a reduced carbon footprint compared to traditional plastics.

Nicknamed “Noah” by the development team, the two-seater city car is said to boast a “spacious trunk” and is undertaking a European tour of car manufacturers, suppliers and universities, Total announced last week.
In addition to its bio-based composition, the car is also ultra-light, electrically powered and can reach speeds of up to 68 miles per hour with a battery range of up to 149 miles on a single charge.

At 794 pounds, the EV excluding the battery is less than half the weight of comparable production cars.

“The result of this fantastic project shows just how far biobased materials have come, to produce such a complex product as a car,” he said. “Noah is the proof that PLA is suitable for so much more than packaging. This is the first ever car to feature a fully biobased chassis and body panels. At Total Corbion PLA, we look forward to working together with the entire value chain to bring more high performance, durable and circular applications to market.”