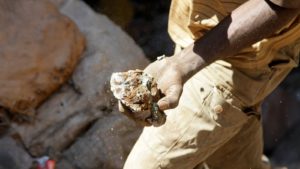 Our increasing reliance on rechargeable batteries is making the Democratic Republic of Congo reconsider how it values cobalt. Once a forgotten byproduct, the price of cobalt has tripled in the last two yearsand the world’s largest producer plans to profit off the demand.

Lawmakers in the capital Kinshasa are currently considering increasing the royalty miners pay to export cobalt and other metals that will be recategorized as “strategic substances,” according to a Jan. 10 report from Bloomberg.

The new mining code will see the tax on base metals like copper and cobalt increase from 2% to 3.5%, and if the metal is classified as “strategic,” that rate could increase to as much as 5%, mining minister Martin Kabwelulu told the Congolese senate on Jan. 2. The code has already been adopted by the National Assembly and is currently being examined by the Senate. If it passes the upper house, it will be sent to president Joseph Kabila to sign into law.

The new law would allow the DRC “the flexibility to face unforeseen developments in the international market if the international economic situation demands it,” according to Kabwelulu. The minister sees cobalt’s role in the economy in particular as “not only strategic but also critical character.”

Those developments in the international market will be driven by consumers’ increasing reliance on rechargable batteries. Lithium-ion batteries in cellphones and the the growing electric car inudsutry make up roughly 49% of the cobalt demand, according to the US Geological Survey (pdf).

Last year, for example, Volkswagen put out a tender for a direct cobalt supplier for ten years from 2019, one of the largest procurement projects in the automotive industry, that signaled a $24 billion shift to electric vehicles. Lithium-ion batteries are also key to manufacturers like Apple and Tesla. Cobalt is extensively used in the production of cathodes which can make up between 35-40% of the total material costof any one battery.

While the law has not yet been passed, if it’s rubber stamped it will be enacted immediately to existing contracts. What’s more, the new code will also change contract stability from 10 years, to five years.

While doing business in the DRC remains lucrative for the mining multinationals, it also unpredictable. Last year, Toronto mining company First Cobalt pulled out of the country to focus on deposits in Canada. Other cobalt veins in Scandinavia and Russia are also being explored. For now, however, the DRC maintains the lion’s share of the world’s cobalt deposits, meaning it can pretty much do as it pleases with it.