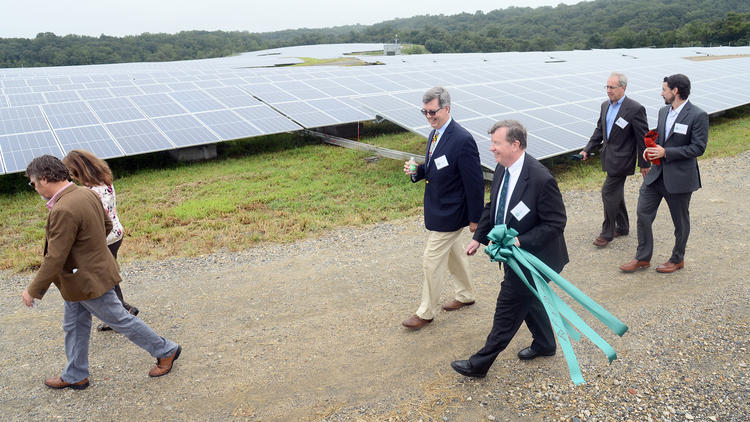 A sprawling new field of solar panels draped atop an 80-acre, capped Annapolis landfill has started generating both clean energy and fresh income for the city, officials said at the plant’s ceremonial opening Tuesday.

“This is going to be a tremendous source of clean, renewable energy for years to come,” Mayor Gavin Buckley told a small gathering at the site.

With 55,000 solar panels, the facility is one of the largest solar projects built on a capped landfill in the country, generating enough energy to power 2,500 homes, city officials said.

Developers said the retired city landfill, just north of Defense Highway, offered them unique advantages for a solar field. The property has no tree cover and significant elevation, and it was not being used for anything else.

The company that built the project, a London-based firm called Building Energy, is leasing the property from the city for about $150,000 a year, according to their head of business development, Silvia Alborghetti. Building Energy spent about $30 million to develop the field, which involved placing the solar panels on top of heavy concrete blocks rather than sinking anchors into the landfill and risking piercing the liners that provide a barrier from contamination.

The solar field first hooked up to the power grid in June after eight months of construction. But the project took years of planning and approvals. Former Mayor Ellen Moyer said she first began discussions on the project after a 2003 blackout cut power to 55 million people in the U.S. and Canada.

“We were looking for ways to rely less on the grid,” said Moyer, who attended the ceremonial opening Tuesday. “The city was a pioneer.”

The city, Anne Arundel County and the Anne Arundel Board of Education all committed to purchasing energy from the solar field developer. Annapolis officials said purchasing the solar power is expected to reduce the city’s electric bill by more than $100,000 a year. Annapolis currently pays 10.07 cents per kilowatt hour. The new rate with the solar plant will be 7.85 cents per kilowatt hour, said David Jarrell, the city’s public works director.

As part of the agreement to develop the power plant, the company agreed to spend up to $3 million to connect the solar park to a nearby Baltimore Gas and Electric Co. substation.

State officials said the solar field will help Maryland electric service providers meet the state requirement that they obtain 25 percent of power from renewable sources by the year 2020. Using a closed landfill was “a great use of land,” said Mary Beth Tung, director of the Maryland Energy Administration.

“It can be hard to turn good prime farmland over to solar, but here, you can’t really do anything else with it,” Tung said. “It’s a big open field that’s going to just sit there.”

There are 274 renewable energy developments on contaminated lands, landfills, and mine sites around the country, according to numbers gathered by the Environmental Protection Agency. The Annapolis facility is one of four in Maryland – there are two small facilities near Hagerstown and one in Ellicott City.

Buckley said he hopes this will be one of many renewable energy projects the city pursues.

“It sends a statement about who we are as a city,” he said.