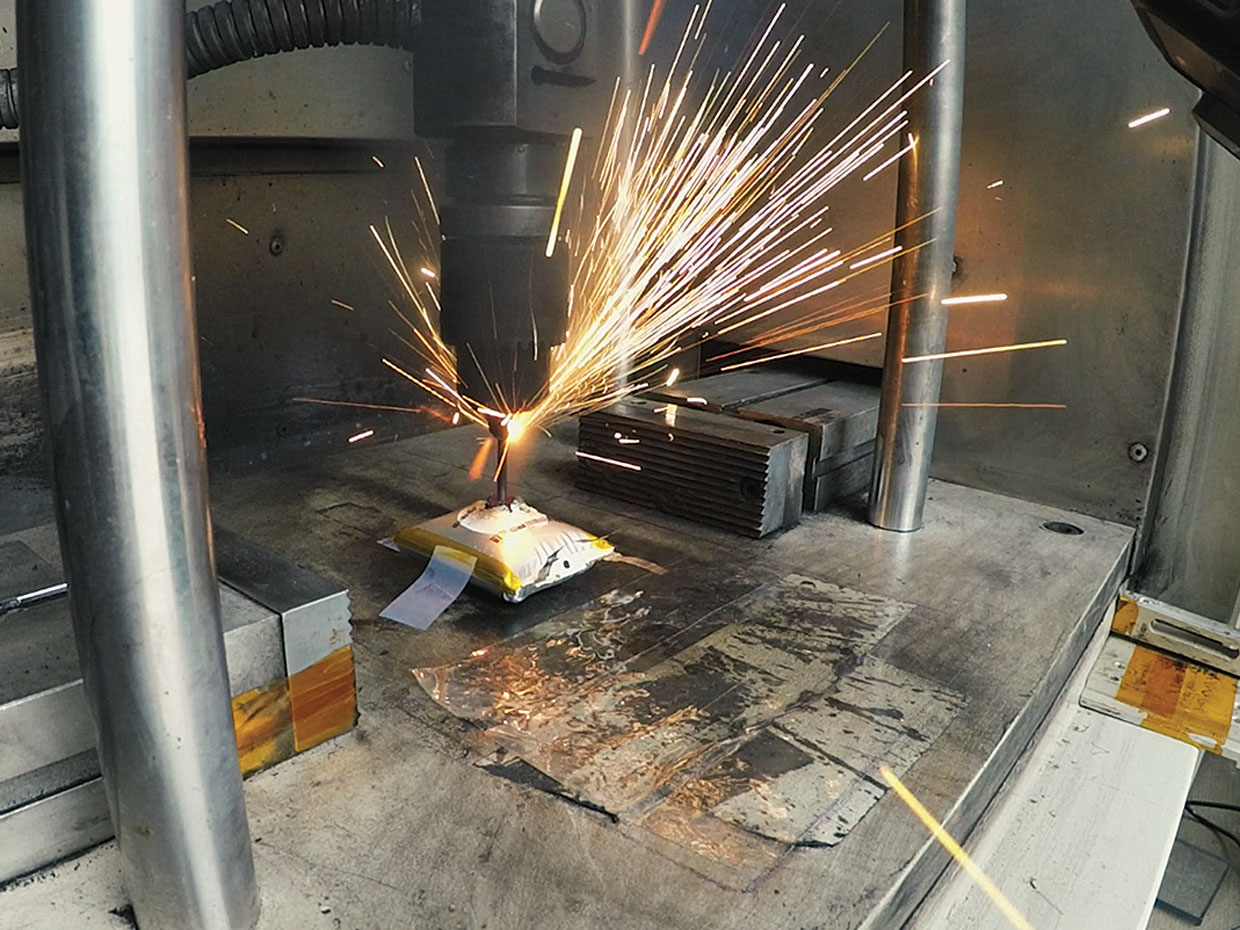 For the most part, lithium-ion batteries are extraordinarily safe. But if a battery is overcharged or develops an internal short, it can catch fire and explode. Unfortunately, this happens frequently enough that battery fires occasionally hurt people and cause major headaches for manufacturers.

With growing demand for the high-capacity, low-cost energy storage that lithium cells provide, engineers have floated many proposals for how to make these batteries even safer. Now Amionx, a company in Carlsbad, Calif., has made an advance that it says further lowers the risk of an explosion, and which it expects to license for use in a commercial product by the end of 2019.

First, a quick review: A lithium-ion battery stores chemical energy in the form of positively charged lithium ions and negatively charged electrons. It converts this energy to electricity by simultaneously shuttling the electrons and ions from its anode to its cathode.

The electrons and ions take different paths: the electrons travel through an external circuit to power a device, and the ions move across the middle of the lithium cell. There, the ions flow through an electrolyte consisting of a thin polymer with holes in it, called a separator, that has been soaked with an organic solvent and seeded with lithium salt. To ferry electrons along, a metallic strip called a current collector runs along the outer rim of both electrodes.

Amionx says its patented battery technology, called SafeCore, makes it less likely that a battery will explode or catch fire due to thermal runaway. This condition can occur when the battery is overcharged at a high voltage or if an internal short occurs between the two electrodes, vaporizing the solvent. To prevent this from happening, Amionx inserts an ultrathin layer of material (just 1 to 5 micrometers thick, slimmer than a human hair) between each electrode and its respective current collector. (The company won’t disclose what kind of material it uses, except to say it’s inexpensive and widely available.)

When triggered by a sudden rise in current, voltage, or temperature, this layer rapidly decomposes and creates an air gap within the cell. The effect is that electrons can no longer pass easily from an electrode to its current collector and be shuttled to the other side. “Think of it like a fuse,” says Bill Davidson, Amionx’s chief operating officer. “We literally create a gap inside the cell that cuts the flow of electricity.”

The goal is for a battery to release energy slowly and safely, instead of all at once. Adding the SafeCore layer reduces the capacity of a cell by 1 to 3 percent, but Amionx says it also prolongs the battery’s life. Amionx is now trying to license SafeCore to manufacturers, and the company’s executives believe it would be particularly useful for home energy-storage systems and electric vehicles, where safety concerns are high.

Unlike other startups working on advanced battery technologies, Amionx isn’t starting from scratch—it’s a spinout of American Lithium Energy (ALE), which has designed custom lithium-ion batteries for the U.S. military for more than a decade. Amionx has also attracted investment from Qualcomm and published a white paper on its approach.

Paul Kohl, a chemical engineer at Georgia Tech, and Huazhen Fang, a mechanical engineer at the University of Kansas, both say that Amionx is taking a unique approach to battery safety that they haven’t seen before. Other research has focused primarily on the separator, the electrolyte, or the circuitry around the cell. “Compared to many other R&D efforts, this technology is more pragmatic, and could be more suitable for commercialization in the short term,” Fang says.

But Kohl says SafeCore won’t change the fact that some manufacturers use low-grade materials and fail to implement proper quality control, which makes the batteries they produce more prone to fires. And these manufacturers aren’t likely to license SafeCore. ”You applaud the effort,” he says, “but it’s going to be a minor contributor to battery safety.”