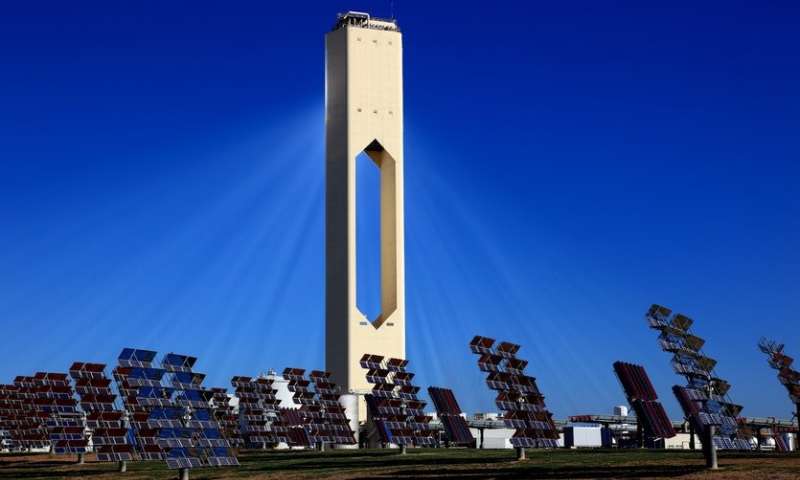 NUST MISIS scientists together with their colleagues from the Central Metallurgical R&D Institute (Cairo, Egypt) have developed a composite material to extend the life of solar towers up to five years. The research article has been published in Renewable Energy.

Today, solar power plants (SPP) are becoming increasingly popular, making it possible to collect and process solar energy on an industrial scale. So-called solar towers are among the most promising types of SPPs. An SPP is a high tower with a water tank and a turbine system inside. The tower is surrounded by heliostats—large spinning mirrors that absorb the sun’s rays and concentrate the total beam at a single point on the tower. The beam lands on the solar absorber, which heats a special salt solution up to 600°C. The water in the adjacent tank is heated from the salt solution and the steam rotates the turbines of the power plant.

Silicon carbide (SiC), a porous ceramic material with a number of useful characteristics—high density, strength, and resistance to oxidation among other things—is the traditional element for solar absorbers. However, silicon carbide has disadvantages—for example, it is sensitive to the aggressive environment of salt melts.

Aluminum nitride (AIN) is a promising addition to silicon carbide—it has high thermal conductivity, a low coefficient of thermal expansion, and high temperature resistance. Currently, Sic and AIN composites are mainly used in electronics, but they can potentially be used in a number of other fields, including the thermal transformation of solar energy.

Scientists from the Functional Nanosystems and High-Temperature Materials Department at NUST MISIS, in cooperation with colleagues from the Central Metallurgical R&D Institute (Cairo, Egypt), have developed porous composites based on SiC/AIN, which contain up to 40 percent aluminum nitride. The optimal compositions of additives and sintering regimes of new composites were selected during the course of the research. They significantly exceed the traditional ones due to the formation of a solid solution at the grain boundaries of silicon carbide. Along with high thermal conductivity and heat resistance, such composites have a low coefficient of thermal expansion, which significantly improves their performance.

“Solar energy requires durable materials without defects. Next, we are planning to test the developed material in solar installations,” commented Dr. Emad Ewais, head of the Egyptian research group.

Thanks to positive thermochemical and thermomechanical properties, SiC/AIN composites are also promising for use in other high-temperature fields, such as metallurgy and aerospace engineering.