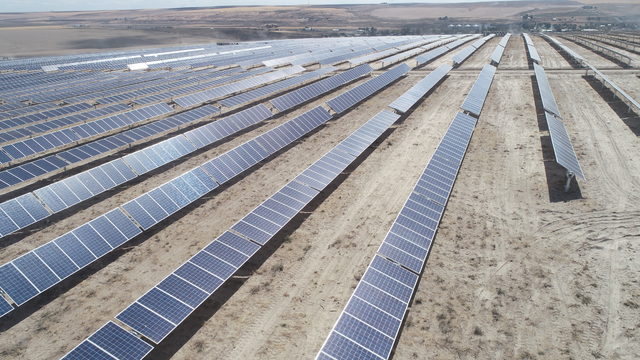 LIND, Wash. – In a place known for fields of wheat, something new sprouted up.

The largest solar farm in Washington is under construction, in Lind. It spans more than 200 acres with 81,000 solar panels.

Avista Regional Business Manager Paul Kimmell said the project is a way to meet the needs of the utility’s customers.

“There’s a lot of interest in renewables,” Kimmell said.

Avista doesn’t own the solar farm, but will buy the power the panels generate from project owner Strata Solar.

The company is based in North Carolina and chose Lind for the site for a few reasons. The area had plenty of land to build on, it was near Avista infrastructure and it’s sunnier in Lind than in most other places in Washington.

“It’s exciting for us to be part of the state of Washington moving forward with its partners in Avista and in the community here in Adams County,” said Strata Solar Project Manager Bob Heckathorne. “We just like being part of progress.”

That progress comes in the form of enough panels to power 4,000 homes. But the 28-megawatt solar panel farm isn’t for homes. It’s for Avista’s biggest customers who are part of the company’s Solar Select program.

“We have 60 customers that have signed from municipalities, cities, like the town of Lind, universities, as well as some of our commercial and industrial customers,” Kimmell said.

The great news for those customers is they’re going green without paying more.

The state legislature passed a bill that promotes local renewable energy by providing tax incentives, according to Kimmell.

“So, those customers won’t see any cost differential,” Kimmell said.

That’s something both Avista and Strata Solar are excited about as the landscape and future of energy changes in Washington.

“We’re seeing a greater appetite. Not only is it the right thing to do environmentally, but economically it is becoming a better option for everyone and we are just very exited to be part of that,” Heckathorne said.

Avista said the solar farm should be operational by the end of the year.

“So, we’re hopeful, in time for Christmas lights,” Kimmell said.

There will be an official ribbon cutting October 23, in Lind.