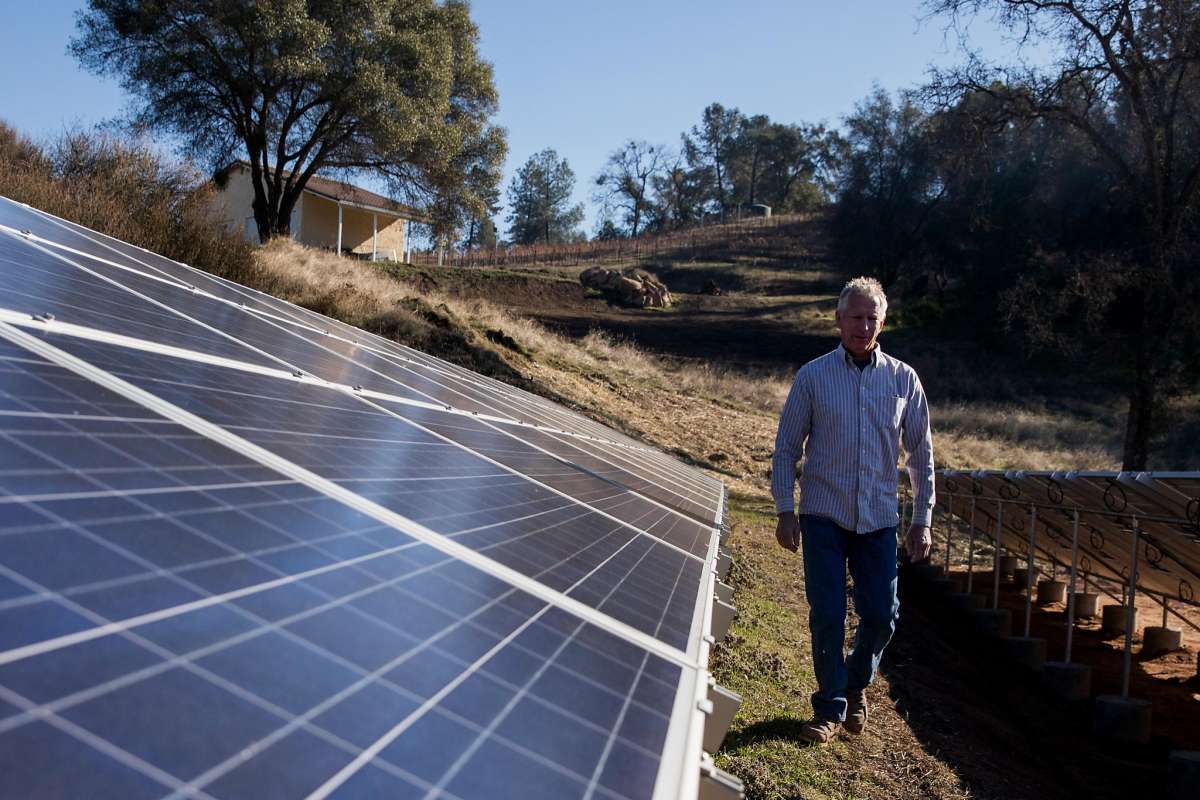 Over the summer, Côme Lague received a notice from Pacific Gas and Electric Co. that made him rethink the energy needs at a vineyard and winery he owns in the Sierra Nevada foothills.

The letter informed Lague that PG&E could decide to intentionally turn off power lines when extreme weather conditions elevate the risk of utility equipment sparking dangerous wildfires. PG&E had never done a planned power outage but has recently embraced them as a defense measure of last resort, particularly during periods of intense winds and very low humidity levels.

But Lague was concerned about the potential impact to his business, La Mesa Vineyards in Amador County. What would he do if a shutoff happened during the fall harvest, when electricity is critical for keeping his business running?

“The grapes are ready when they’re ready, and then you bring them in,” Lague said. “If you’re in the middle of crushing them, and the power is shut off for days — you’re not exactly gonna be manually processing all that fruit.”

Lague, a San Francisco resident, already had a solar system on the property and didn’t want to rely on a generator. He decided to expand the solar system so it can adequately satisfy his business needs if PG&E does shut off the power to prevent a fire.

It’s one example of several ways advocates of solar power say the technology can play a bigger role in the state’s electric grid — an opportunity they say has become much more necessary as climate change increases the likelihood of extreme weather with the potential to fuel devastating wildfires.

By boosting the usage of solar panels and batteries that store the power they generate, California could theoretically mimic across the state what Lague is doing for his winery, allowing homes and businesses to keep the lights on without turning to a fossil-fuel-powered generator.

That would entail an embrace of what’s known as distributed energy, where power is generated across decentralized sources as opposed to a traditional power plant, hydroelectric dam or large-scale solar farm.

California has taken great strides to expand the use of solar power, with new laws that require panels on most new homes and promote the installation of energy storage systems. But the state could still do much more, according to the California Solar & Storage Association.

“We have long thought that distributed solar was a critical component to preventing some of the worst impacts of climate change but, obviously, the wildfires and the grid’s role puts a whole new urgency to the deployment of distributed energy,” said Bernadette Del Chiaro, the industry group’s executive director. “There’s multiple solutions that need to be deployed — there’s no one single silver bullet.”

Lawmakers could take steps to speed up and simplify how customers connect new solar projects to the grid, according to Brad Heavner, the association’s policy director.

They should also consider creating a mechanism to compensate customers for using batteries to share power with the electric grid, and they can take a look at providing some kind of financial support for emergency centers that need help installing solar panel and storage systems, Heavner said.