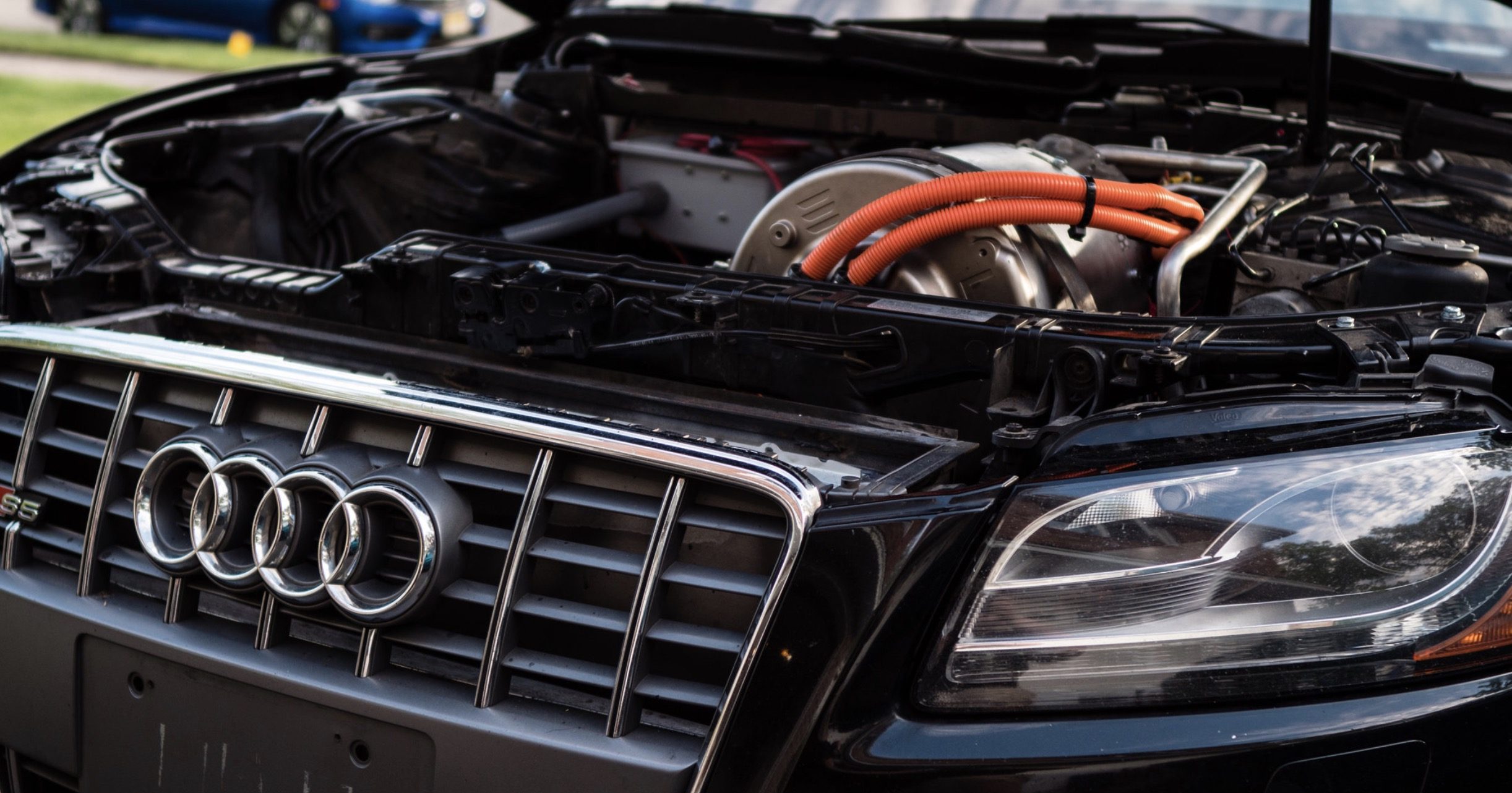 Audi has yet to launch its first all-electric vehicle built to be electric from the ground up, but it has conversion compliance cars around.

But now an Audi S5 owner decided to make his own conversion using a Tesla powertrain and it might be the best all-electric Audi out there right now.

We are starting to see a lot of cool EV conversions powered by Tesla powertrains from salvaged vehicles.

Like A classic 427 Shelby Cobra powered by a Tesla electric motor & Kia Soul EV battery pack and more recently, a Tesla-powered Honda Accord called ‘Teslonda’, which can launch from 0 to 60 mph in 2.7 seconds.

Now we are talking a look at an Audi S5, which is the high-performance variant of the Audi A5, converted to electric propulsion with a Tesla Performance motor and Tesla battery modules.

It’s a very fun project because most EV conversions we have seen so far have been of classic cars or lightweight freak racing vehicles.

Instead, we are looking at a modern car, a luxury and performance one on top of that, that is being converted to electric propulsion not just for fun weekend drives or the drag strip but also to serve as a daily driving car.

Electrek talked with the owner of the vehicle and the man behind the electric conversion project, Samuel Polyak, who also did classic EV conversions in the past and now approached this new project with this mindset.

He found a 2010 Audi S5 with a lot of mileage on the engine and being a fan of Audi and its quattro all-wheel-drive, he deciced to set out to make the vehicle electric while keeping the quattro system.

Sam showed up with the vehicle at the Supercharged Sunday ‘Tesla Dyno Day and BBQ’ at Chameleon tuning in Bohemia, NY last weekend.

He separated the Tesla drive unit and inverter in order to better fit the system in the engine enclosure in the front of the S5: 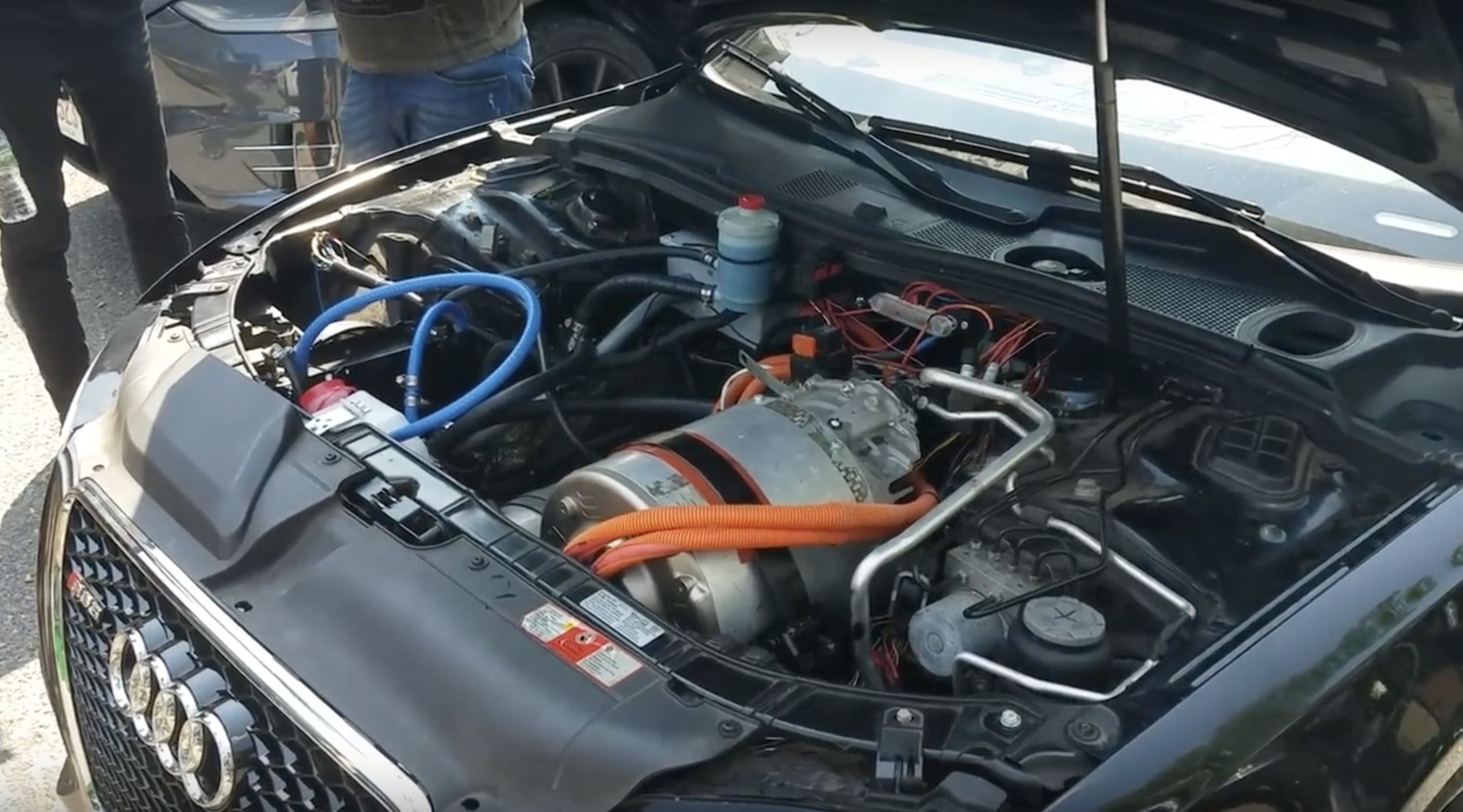 What is especially interesting is that he created an adapter plate with his own gear reduction to link the Tesla drivetrain through the factory transmission housing to the quattro all-wheel-drive system, which enables the car to retain its all-wheel-drive traction and differentials with a single electric motor.

As for the battery, the battery modules are stacked where the back seats used to be, which is, of course, the biggest drawback to this conversion; it doesn’t have a back seat anymore.

But that’s because Sam decided to try and fit the whole 85 kWh pack in there by stacking all the modules. With most conversions using Tesla batteries I have seen so far, they generally only use a fraction of the total modules.

He stacked up all 16 of them inside the car:

Most of them are visible on those pictures, but he also squeezed a few more in the front.

You would think that it would badly affect the front/rear balance, but Sam told Electrek that the vehicle was already front heavy and he actually expects it to improve.

It still needs some tuning, but he is so far really impressed by the handling of the vehicle.

Sam hasn’t tried to drive on an entire full charge yet, but he expects that the vehicle should be able to travel 250 miles on a single charge, which brings me to my point that it might be the best all-electric Audi on the road today.

That’s why Sam is looking to turn his EV conversion projects into a business at Polykup.com. For the Audi S5, he is still working on building a custom instrument cluster to work with EV information that you would need, but the car is already working and once completed, he plans to use it as an example of what his business is able to do.