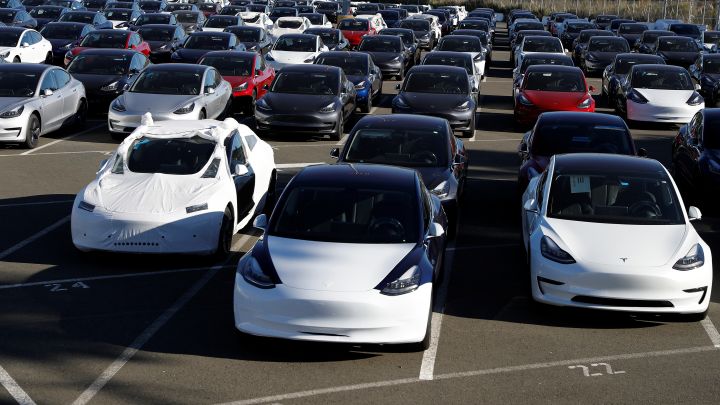 You may not have heard of neodymium, but you’re probably carrying some of it around with you right now. It’s in your cellphone, your headphones and you might be driving several pounds of it around in your car.

Neodymium — pronounced “nee-oh-DIM-ee-um” — is one of 17 chemically similar elements called rare earth elements, and demand for this metal is on the rise.

“Neodymium is responsible for most, if not all, of the growth in rare earth demand at the moment,” said Roderick Eggert, deputy director of the Critical Materials Institute at Colorado School of Mines.

For an iPhone to vibrate, for AirPods to play music, for wind turbines to generate power and for a Toyota Prius or Tesla Model 3’s motor to spin, they need powerful magnets. If you combine neodymium with iron and boron, you can make a neodymium-iron-boron magnet, which is the most powerful type of permanent magnet ever created.

In the case of your cellphone and earbuds, using neodymium magnets means they can be physically tiny but still strong. For motors, using permanent magnets means powerful, efficient motors with fewer electromagnetic components.

Magnets might seem trivial and most useful for sticking things on your fridge, but according to market research group IMARC, the neodymium-iron-boron magnet market was worth $11.3 billion in 2017.

“In a couple of decades we’re forecast to have a million electric vehicles on the road in the U.S. and that’s going to cause demand of neodymium to surge,” said Michael Kanko, CEO of Import Genius.

Earlier this year, Tesla became one of several electric car makers to use motors with neodymium magnets. It’s installing them in its Tesla Model 3.

Tesla imported over four million pounds of automotive parts from China and Taiwan and the bulk of that is neodymium-magnet electric motors, Kanko said.

But demand for the rare earth metal is outstripping supply by about 3,000 tons per year, said Julie Klinger, the author of “Rare Earth Frontiers.”

Today, that supply is coming from China. More than 80 percent of the world’s neodymium is produced there. In 2017 alone, China mined 105,000 metric tons of rare earth metals, while the U.S. has only produced about 43,000 metric tons in the last 20 years combined.

“The United States used to be the most important single producing country for rare earths, from a single mine called the Mountain Pass mine in southern California near the border with Nevada,” said Eggert. “In the 1960s and 70s, this mine was the dominant rare earth mine in the world. But as Chinese mines were developed in the 1980s and 90s, they gradually drove the Mountain Pass mine out of business.”

Around the same time that was happening, China was investing deeply in its own rare earth metal mining and production and succeeded. From the late 1990s to 2010, China became the dominant player and it now controls the majority of the market, said Kanko.

The risks involved in relying so significantly on a single source for such a valuable commodity were illustrated during a trade dispute between China and Japan in 2010. The price per metric ton jumped from $50,000 in 2010 to $250,000 in 2011, Klinger said.

While the price has since come back down, concerns remain. Toyota, for example, recently developed a new neodymium-reduced magnet, citing concerns about neodymium shortages.

Earlier this year, rare earths narrowly avoided being included on a new list of U.S. tariffs on Chinese goods. In the original $200 billion proposed tranche of Chinese tariffs, neodymium and other rare earths were on that list.

“Interestingly, the final list of 6,000 Chinese products that were targeted, neodymium and other metals were exempted,” Kanko said. “It shows how important metals are to the U.S. economy and shows we’re concerned about it.”

These elements are so important, that the U.S. is going to start producing rare earths again. Mountain Pass mine was recently bought out of bankruptcy by two U.S. investment firms called MP Materials. The company says that it wants to “rebuild a rare earth industry in America.”

And while MP Materials still has to ship material to China for further refinement, a source close to the company said that it plans to be fully self-sufficient in the U.S. within 18 months.

Historically though, extracting and processing these materials has had environmental consequences.

“If you want to open an neodymium mine you’re going to bring up a whole bunch of other elements with it alongside neodymium…sometimes uranium” said Klinger. “It’s very difficult to open a mine in a particular place without destroying the landscapes and livelihoods that were previously there.”

But Klinger is optimistic that as demand continues to rise, better processes will be implemented.

“One of the things that is good about the projected increase in demand for neodymium is that we will likely see a diversification of neodymium supply,” Klinger said. “My hope is with that we will also see increased international cooperation around recycling and reclaiming neodymium from spent electronic motors.”