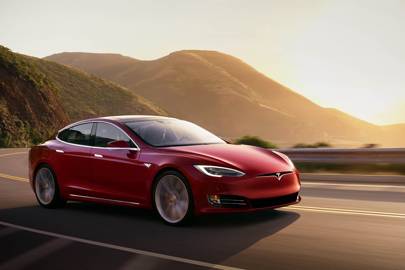 In the 1970s, Dr Donald Highgate found a way to make contact lenses more comfortable. With colleagues at the University of Surrey, he developed a transparent, flexible polymer that held water like a sponge.

Now, the same technology has spawned a new supercapacitor material that could accelerate the adoption of electric cars, and solve one of the biggest problems facing renewables.

Instead of storing energy in chemical form like a battery, supercapacitors hold it in an electrical field, like static collecting on a balloon. In 2011, Tesla’s Elon Musk predicted that it would be supercapacitors, not batteries, that would power future vehicles.

They promise faster charging times, and don’t rely on expensive materials such as lithium and cobalt, says Dr Sam Cooper from the Dyson School of Design Engineering. They are also more durable. “Supercapacitors have a very long cycle life,” he explains. “You can fill and empty them a huge number of times.”

The problem has always been a lack of energy density. The best available supercapacitors hold just five per cent of the energy per kilogram of a lithium ion battery. A fleet of supercapacitor-powered electric buses in Shanghai illustrates the point. Although they can charge in less than 30 seconds while dropping off passengers, they need to do so every few stops. But that could be about to change.

Superdielectrics Ltd has developed a supercapacitor material that can store “remarkable amounts of electricity, far beyond what we’ve seen before,” according to its CEO Jim Heathcote. It’s cheap to produce, uses no rare elements, and because it’s mostly water, it can’t catch on fire like traditional batteries. The discovery happened almost by accident, says Highgate, who is now director of research at the company.

His contact lenses were based on a polymer mesh that swelled up when water molecules attached to it, trapping more water within the holes in the net. By adding different elements to the mix, he was able to give the polymer additional properties. In the 1990s, he and Heathcote developed a variant with attributes that could be used for hydrogen fuel cells.

By 2016, the pair were trying to make their polymer matrix more electrically conductive with an eye on biomedical applications – potentially as an interface between the nervous system and prosthetic limbs. But when they tested the new polymer – a thin, light blue square the size of a postage stamp – something strange happened.

Highgate remembers scribbling some rough figures on the back of an envelope. “I did the calculation and I thought, ‘Bloody hell, that’s ridiculous,'” he recalls. “[The capacitance] was 100 times what it ought to have been for a little thing a square centimetre. I thought I’d made a mistake.”

They had stumbled on a material with dielectric properties between 1,000 and 10,000 times greater than existing conductors. Over the last 14 months Superdielectrics has been working with researchers at the universities of Bristol and Surrey to determine whether their polymers work in real world conditions. They released their results this week.

The scientists have created small devices that can power a fan or an LED for a few minutes, and claim that with further work the material could eventually reach energy densities of up to 180 watt-hours per kilogram, compared to 10 Whr/kg for the best currently available supercapacitors.

That would bring supercapacitors in line with lithium-ion batteries. It could mean smartphones that charge in seconds, and cheaper, safer electric vehicles that you can power in the same amount of time it takes to fill up a petrol car. Instead of charging every other stop, China’s buses could run for 20 or 30 before being juiced up in seconds.

Shortening charging times could also accelerate the adoption of electric vehicles, according to Dr Jenifer Baxter at the Institution of Mechanical Engineers. “If you can decrease the time spent charging and you can maintain or increase the range within that charge, that will certainly reduce people’s anxiety about electric vehicles,” she says.

Regenerative braking is another potential application. “Batteries don’t like to be charged quickly,” says Cooper, who was not involved in the research. Supercapacitors are perfect for it, and could help make electric vehicles more efficient.

There are some potential hurdles to overcome. Although the material is competitive with batteries on weight, Cooper points out that size will also matter if they’re going to be used within vehicles. This hasn’t been researched yet, but Highgate estimates the volume of a supercapacitor made using this technology would be about 30 per cent greater than an equivalent battery.

Another issue, and the “Achilles heel” of supercapacitors, according to Highgate, is their internal leakage current. While batteries can store energy for weeks or months, supercapacitors can only do so for hours or days before it seeps away. That might not matter for some applications, but would be a problem for electric cars if they were left unused for a few days. Combining supercapacitors with batteries as a back-up could be one solution.

Most see the first use for this technology not within cars, but as a key part of the charging infrastructure. “Roughly half of the population doesn’t live in a place where they can charge overnight at home,” says Tim Martin, director of Zapinamo, which is developing flexible electric charging stations. Those people need access to rapid charging facilities instead, but Martin says the national grid would struggle to supply electricity at the speeds required.

Large storage units full of supercapacitors could start popping up at service stations, to act as a buffer between electric cars and the grid. They could charge slowly, outside of peak times when electricity is cheaper, and then deliver that energy to multiple vehicles rapidly when required. “Stored energy is the only way that you can combine instantaneous power with the speed of charging that makes range anxiety go away,” says Martin.

The same approach could also be a game-changer for renewable energy. Because solar and wind are unpredictable, the electricity they generate needs to be stored so it can be released during lulls. “When everyone puts on the kettle after dinner, that sudden spike in demand has to come from somewhere,” says Cooper. At the moment, that is done mostly by pumping water uphill and running it back through turbines when energy is needed, but supercapacitors offer much more flexibility because they can respond so quickly.

“Wind, wave and solar energy is available but it is intermittent and, without storage, cannot be relied upon to meet our energy needs,” says Highgate. “This new work would transform the energy system which underpins our way of life – it is the necessary development before we and our children can have a genuinely sustainable, environmentally safe energy supply.”