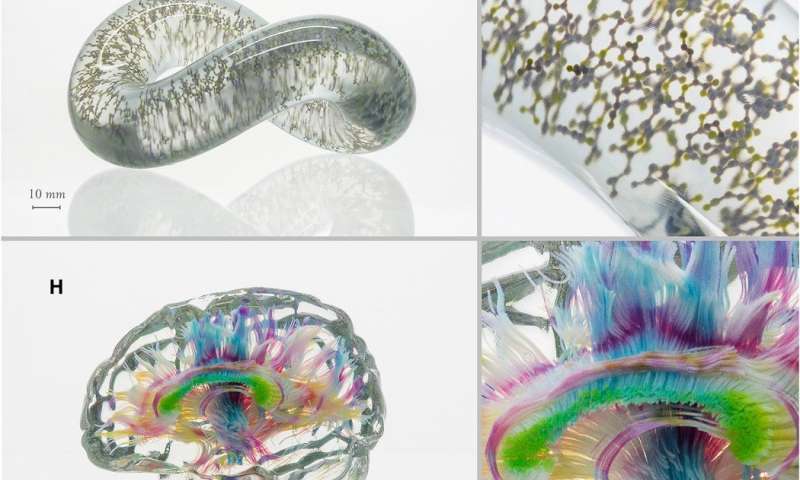 A team of researchers from MIT and Harvard University has come up with a way to get 3-D printers to print objects using data sets rather than geometric representations. In their paper published on the open access site Science Advances, the group describes their new technique and some of the ways they believe it could be used.

Anyone who has seen a modern 3-D printer in action knows that there is a lot of room for improvement. Printed objects are generally a single color and have a blob-like quality. In this new effort, the team at MIT has developed a technique that uses actual data describing an object to print the desired object. The result is comparable to moving from a dot-matrix printer to a laser printer.

To print an object on conventional 3-D printers, calculations are made regarding a digital description of an object, converting the numeric description to geometric shapes that can be used to print an object. The new technique, on the other hand, converts data that describes the digitized image to voxels (3-D pixels). That allows the printer to print voxels instead of shapes, with incredible precision—currently at a resolution of 2.3 million voxels per cubic centimeter.

In practice, this means taking data from a source such as an MRI machine, converting it, and then printing it in incredible detail. Additionally, like pixels, each individual voxel contains a color code that can be used to recreate the actual color of the real object—by mixing the familiar magenta, cyan, yellow and black, and of course white and clear. The result is an object that looks very much like the original object, say a human heart, or an ancient artifact. The researchers note that their technique can also be used to create new objects from scratch on a 3-D modeling computer and then print them. To demonstrate, they designed some interesting objects such as a very intricate mask with subtle color changes, and 3-D printed it—and in so doing, gave birth to an entirely new art form.

By extending advances in multimaterial 3-D printing, researchers have created a new method to 3-D print complex scientific data sets as physical objects identical to their on-screen visualizations. This new approach eliminates the traditional need to create an intermediate “boundary” representation of an object – a step that can result in data alteration or information loss and thus, less-than-realistic physical manifestations. The new method not only bridges the gap between digital and physical, but also requires less preprocessing to create a more direct translation of data to object. Modern tactics to visualize data, such as rendering of patient data from magnetic resonance imaging (MRI), often rely on 2-D computer displays of 3-D data sets. Current 3-D printing methods have strong limitations when applied to complex or highly diverse data sets, but experts agree that such high-resolution physical representations of scientific data would provide a better way for scientists to understand and interact with many data sets. Motivated by this need, Christoph Bader and colleagues used a new approach to rasterization (taking a visualization’s shape and converting it into a raster image for output) to create high-resolution voxel representations (essentially 3D pixels) in order to print scientific data using multiple materials. According to Bader et al., the method has potential application in a wide variety of fields including conservation and preservation of cultural artifacts, presurgical planning and education, to name a few.