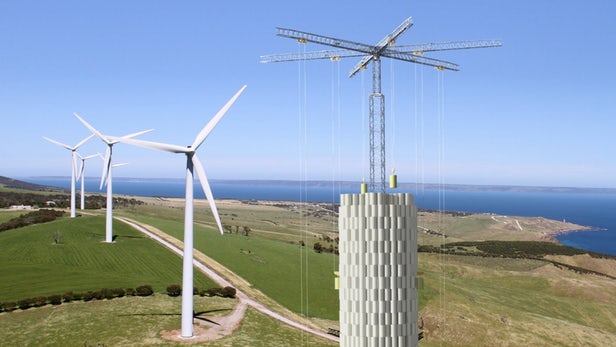 Access to energy wherever and whenever we need it is fundamental to much of modern society, keeping us warm in the winter, cool in the summer, entertained all year round, and making sure our food is safe to eat. How we store that energy is a constant work in progress, and while plenty of scientists are making important but incremental advances with inventive new materials and electrolytes, others are out to entirely reinvent what we think of as a battery. Here are five examples from 2018 that might open up new doorways in energy storage, and are thought-provoking concepts that came from thinking outside the square.

Storing energy in a tower of concrete blocks

Consider a regular spring. If you coil that spring with your finger, you are packing it with potential energy. If you then allow it to uncoil, you are letting that energy free. Now imagine that principle applied to a tower of stackable concrete blocks, with a six-armed crane acting as the finger.

This is the vision of Swiss startup Energy Vault, which is developing a new kind of battery, if you can call it that, designed to store energy from renewables like wind and solar in skyscraper-sized concrete towers. To charge it, the crane lifts blocks off the ground and stacks them to create a tower. To discharge it, the crane lets gravity lower the blocks to the ground and converts the kinetic energy generated during the descent into electricity.

This is a similar premise to pumped hydro plants, which are commonplace and also rely on gravity. These pump water up to into a reservoir during periods of low grid demand, and then capture the power generated as it is released to rush downhill through turbines. Energy Vault says its solution could hold a capacity of up to 35 MWh and 4 MW peak power and offer a roundtrip efficiency of 90 percent. It is deploying its first system in India in 2019.

A TV remote control, a watch and a flashlight, these are all everyday items that somewhere in the design process, address the need to accommodate cookie-cutter batteries in cylindrical and rectangular shapes. But what if batteries could be purpose-built in any shape to fit with what would otherwise be an optimally designed product?

In October, scientists at Texas State University and Duke University came up with a way to 3D print batteries out of a plastic known as polylactic acid (PLA) in theoretically any shape. Doing so involved some experimentation, because PLA in its typical state is not an ionic conductor.

The scientists got around this little problem by infusing the material with a cocktail of ethyl methyl carbonate, propylene carbonate and lithium perchlorate. They also used graphene in the anode and carbon nanotubes in the cathode, the positive and negative electrodes, respectively.

Through these improvements, the team was able to 3D print a proof-of-concept battery in the shape of a coin cell that actually worked. They built on this by 3D printing a battery into a bracelet equipped with LEDs, which was able to remain illuminated for around 60 seconds. This is far from serving a practical purpose, but with the scientists now working to improve the capacity of their batteries it could one day open up some very interesting opportunities when it comes to product design.

The Sun, but in a box

Only a concept at this stage, MIT’s so-called “sun in a box” leans on current technology known as a molten salt system, where energy is stored in the form of heat. In these systems, the heat can be stored in molten salts for an extended time and released to boil water, with the resulting steam in turn driving a turbine to generate electricity.

The MIT researchers describe a system that instead of salt uses molten silicon, which is able to store more heat and is not as corrosive at high temperatures. Additionally, at high temperatures it shines extremely brightly. This means that instead of using a heat exchanger to boil water to generate electricity, the molten silicon system is able to use multijunction photovoltaic solar cells to generate electricity from the light the silicon emits.

They have tested out this concept with a miniature tank, but say it could be channeled into a system comprising two tanks each measuring 33 ft (10 m), which would provide enough power for 100,000 homes. They also say the design can be implemented anywhere, and would be much cheaper than the current gold standard in energy storage, pumped hydro.

“This is geographically unlimited, and is cheaper than pumped hydro, which is very exciting,” says Asegun Henry, lead researcher. “In theory, this is the linchpin to enabling renewable energy to power the entire grid.”

Standard batteries we use today consist of a cathode at one end and an anode at the other, with a non-conducting separator in the middle. Scientists at Cornell University have combined their powers in an interesting battery design that intertwines these components in a swirling shape, a configuration that allows it to charge up in just seconds.

The key to the battery is the porous nature of the anode structure, containing thousands of tiny pores each just 40 nanometers wide, which are filled in with other essential battery components. That includes an ion-conducting separator material along with sulfur, which serves as the spiraling battery’s cathode, and a dash of electronically conductive polymer.

This means that inside every one of those thousands of pores is everything needed for energy storage and delivery, essentially making them into tiny little batteries themselves. Shrinking them down to the nanoscale offers far greater power density, which means that the energy can be accessed much more readily than a regular battery.

“By the time you put your cable into the socket, in seconds, perhaps even faster, the battery would be charged,” says study lead Ulrich Wiesner, speaking of how a fully developed version of the twisting battery might function.

Just like the 3D-printed PLA battery mentioned above, flexible batteries promise to weave energy storage functionality into products of interesting shapes and sizes, something that is particularly promising in the world of wearable tech. One very intriguing example of this is a battery built this year at Columbia University inspired by the human spine.

It consists of different sets made up of cathodes, anodes, separators and current collectors, with each of these units joined together through so-called “flexibility providers.” Just like disks and ligaments allow your spine to bend, these flexibility providers enable the battery to be twisted and contorted, all while maintaining a stable voltage.

Though the scientists behind it won’t divulge what the flexibility providers are made of exactly, they claim their flexible battery boasts among the highest energy densities in its class, and is capable of around 85 percent of what you’ll get from a regular lithium-ion battery today.