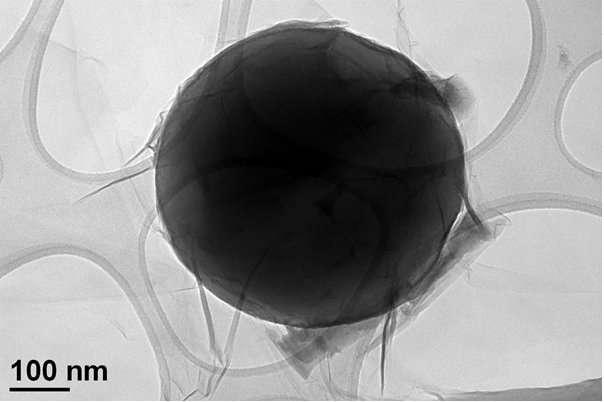 Researchers from the U.S. Army and top universities discovered a new way to get more energy out of energetic materials containing aluminum, common in battlefield systems, by igniting aluminum micron powders coated with graphene oxide.

This discovery coincides with the one of the Army’s modernization priorities: Long Range Precision Fires. This research could lead to enhanced energetic performance of metal powders as propellant/explosive ingredients in Army’s munitions.

Lauded as a miracle material, graphene is considered the strongest and lightest material in the world. It’s also the most conductive and transparent, and expensive to produce. Its applications are many, extending to electronics by enabling touchscreen laptops, for example, with light-emitting diode, or LCD, or in organic light-emitting diode, or OLED displays and medicine like DNA sequencing. By oxidizing graphite is cheaper to produce en masse. The result: graphene oxide (GO).

Although GO is a popular two-dimensional material that has attracted intense interest across numerous disciplines and materials applications, this discovery exploits GO as an effective light-weight additive for practical energetic applications using micron-size aluminum powders (μAl), i.e., aluminum particles one millionth of a meter in diameter.

The research team published their findings in the October edition of ACS Nano with collaboration from the RDECOM Research Laboratory, the Army’s corporate research laboratory (ARL), Stanford University, University of Southern California, Massachusetts Institute of Technology and Argonne National Laboratory.

“Because aluminum (Al) can theoretically release a large quantity of heat (as much as 31 kilojoules per gram) and is relatively cheap due to its natural abundance, μAlpowders have been widely used in energetic applications,” said Wu. However, they are very difficult to be ignited by an optical flash lamp due to poor light absorption. To improve the light absorption of mAl during ignition, it is often mixed with heavy metallic oxides which decrease the energetic performance,” Wu said.

The team demonstrated the value of μAl/GO composites as potential propellant/explosive ingredients through a collaborative research effort led by Professor Xiaolin Zheng at Stanford University and supported by ARL’s Dr. Chi-Chin Wu and Dr. Jennifer Gottfried. This research demonstrated that GO can enable the efficient ignition of μAl via an optical flash lamp, releasing more energy at a faster rate thus significantly improving the energetic performance of μAl beyond that of the more expensive nanometer-sized Al powder. The team also discovered that the ignition and combustion of μAl powders can be controlled by varying the GO content to achieve the desired energy output.

Images showing the structure of the μAl/GO composite particles were obtained by high resolution transmission electron (TEM) microscopy performed by Wu, a materials researcher who leads the plasma research for the Energetic Materials Science Branch in the Lethality Division of the Weapons and Materials Research Directorate at ARL.

“It is exciting to see with our own eyes through advanced microscopy such as TEM how a simple mechanical mixing process can be used to nicely wrap the μAl particles in a GO sheet,” said Wu.

In addition to demonstrating enhanced combustion effects from optical flash lamp heating of the μAl/GO composites by the Stanford group, Gottfried, a physical scientist at ARL, demonstrated that the GO increased the amount of μAl reacting on the microsecond timescale, i.e., one millionth of a second a regime analogous to the release of explosive energy during a detonation event.

Upon initiation of the μAl/GO composite with a pulsed laser using a technique called laser-induced air shock from energetic materials (LASEM), the exothermic reactions of the μAl/GO accelerated the resulting laser-induced shock velocity beyond that of pure μAl or pure GO.

According to Gottfried, “the μAl/GO composite thus has the potential to increase the explosive power of military formulations, in addition to enhancing the combustion or blast effects.”

As a result, this discovery could be used to improve the range and/or lethality of existing weapons systems.