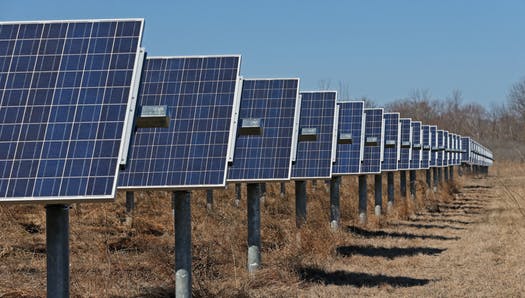 Minnesota is set for a second consecutive year of strong growth for solar energy, anchored by a 23 percent increase in the size of the state’s community solar garden program.

Developers in the state also are on track to add at least four larger “utility scale” solar arrays in coming years. Each would be bigger than the state’s largest existing solar development near North Branch, which provides power to Xcel Energy.

“Our members have a huge pipeline of utility-scale [solar] that they are working on,” said Beth Soholt, executive director of Clean Grid Alliance, a St. Paul group that represents wind and solar power developers and renewable energy advocates.

While solar energy still makes up only about 1 percent of Minnesota’s power generation, it has grown from virtually nothing: 1 megawatt of production capacity in 2008 to a projected 882 megawatts by the end of 2018. A megawatt is enough to provide electricity for about 1,300 average homes in the Upper Midwest.

Most of the increase has occurred in the past two years. In the next few years, Minnesota may see a decrease in solar power coming online. But there’s plenty of activity on projects that will open by 2023.

Edina-based Geronimo Energy, another major wind and solar developer, is developing a utility-scale project in the southwest part of the state and has plans for another in central Minnesota.

“A lot of our efforts right now are focused on solar,” said Betsy Engelking, Geronimo’s vice president of policy and strategy. Much of the growth is spurred by tax policy, namely federal tax credits for solar projects that begin phasing out after 2019.

A similar phaseout of wind tax credits beginning in 2017 led to a surge of new wind projects, many of which are still being built.

Solar arrays, like wind farms, can only produce power intermittently, though solar is mostly generated during peak periods of electricity consumption.

Minnesota is projected to add 286 megawatts of solar power capacity in 2018, down from an additional 395 megawatts in 2017, but that’s still solid growth.

The state ranked fifth nationally in new solar installations during the third quarter, according to the Solar Energy Industries Association, a trade group. Minnesota ranks 13th for total solar capacity.

Solar in Minnesota comes in three types: distributed, which primarily includes residential and commercial rooftop installations; the community solar garden program, which includes arrays ranging from 1 to 5 megawatts; and utility-scale, solar farms that can be 100 megawatts or more.

The state’s pioneering community solar garden program, which was mandated by the state Legislature in 2013, is aimed at residents, businesses and governments that want solar energy without setting up their own panels.

The program is administered by Minneapolis-based Xcel Energy.

It got off to slow start, but there are now around 160 community solar gardens.

At least another 170 megawatts of solar garden power are expected to roll out over the next two years.

During that time, the solar garden program should still be the largest source of new solar energy deployed in Minnesota.

But seeds are being planted for major utility-scale solar arrays to come online in the early to mid-2020s.

Invenergy’s project near Lake Wilson will produce up to 150 megawatts, and another project near Brewster, northeast of Worthington, will produce about 125 megawatts. Both would come online by 2023, said Dan Litchfield, an Invenergy senior manager.

The company already has acquired lease rights on much of the land needed for the projects, which would together cover around 1,900 acres. Invenergy is shopping for a power buyer for both projects.

Geronimo is doing the same for the proposed 150- to 200-megawatt Elk Creek solar farm in Magnolia, which is near Luverne.

The company is planning a similarly sized project northwest of St. Cloud in Royalton.

“There will be a lot of people looking next year for solar delivery by 2023,” said Geronimo’s Engelking, meaning utilities and other power buyers will be locking in projects in 2019.

Xcel, Minnesota’s largest electric utility, is not expected to add more utility-scale solar capacity until the mid-2020s. The company will not need new electricity generation until then, as several of its large wind projects are coming online in 2019 through 2021.

That lost power is expected to be replaced by a new gas-fired power plant and more renewable energy installations.

“We are going to have a lot of solar on our system, and the most efficient is universal [utility-scale] solar,” said Ben Fowke, Xcel’s CEO.

With the falling costs of solar equipment, solar energy in Minnesota will be more competitive with natural gas-fired power within a few years, say Fowke and other industry executives.

For Xcel in the Upper Midwest, new utility-scale solar would right now cost $35 to $45 dollars per megawatt hour, compared with $15 to $25 for new wind projects and $30 to $40 per megawatt hour for a new gas plant.

The cost of power production from community solar gardens is $120 to $140 per megawatt hour, according to Xcel.

Economies of scale for larger projects is a prime reason for the cost difference between the solar gardens and utility-scale solar.

Xcel is isn’t the only power purchaser for new Minnesota solar projects.

“There are other utilities in the Upper Midwest that could be buyers, and there is also a large corporate appetite,” said Allen Gleckner, director of energy markets at Fresh Energy, a renewable energy research and advocacy group in St. Paul.

Companies are important renewable energy buyers. Indeed, 89 percent of the electricity output from the community solar garden program goes to corporations and governments, with residents taking the other 11 percent.

“The economics [of solar] are going to be very compelling for both utilities and corporate customers,” Gleckner said.