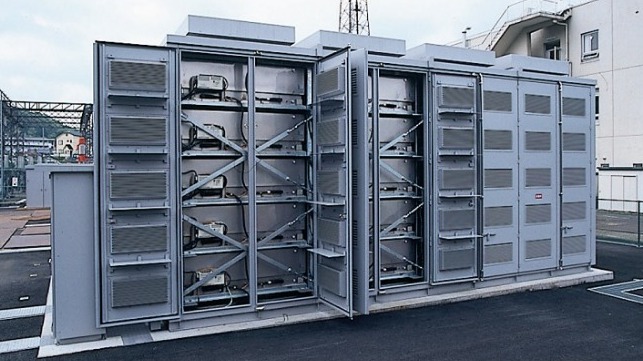 While electrochemical batteries form the basis of modern mobile rechargeable energy storage technology, thermal energy storage once formed the basis of mobile propulsive energy storage. During the era of coal-fired steam railway propulsion, some short-distance steam locomotives and even some boats operated on stored thermal energy. Saturated water was held at high pressure of 250 psia to 1,000 psia at temperature well in excess of the normal boiling point at sea-level atmospheric pressure, at over 200oC. When the throttle was opened, the drop in pressure inside the storage system resulted in some of the heated water flashing into steam.

Some of the very early short-distance submarines built in America were powered by flash steam that was expanded in cylinders to either drive a propeller or in railway traction, drive railway wheels. Flash steam propulsion proved to be very reliable and incurred very low operating costs. During 1924, efforts in Denmark resulted in the development of molten metal thermal energy storage involving sodium hydroxide to store heat at 300oC and intended to produce steam. In this modern era, solar-thermal power plants include molten metal thermal energy storage to generate electric power after sunset.

The alternative high-temperature energy storage technology involves electrochemical activity, with the molten sodium-sulfate battery involving a separator to enable controlled electrochemical interaction between molten sulfur and molten sodium. Molten sodium-sulfate technology has been applied to stationary, grid-scale electrical energy storage applications. However, there have been incidents where sodium-sulfate batteries have ignited into flames. The performance of the separator technology is of critical importance to the performance and longevity of grid-scale molten metal batteries. Researchers at MIT working under Professor Donald Sadoway have achieved significant breakthroughs in developing durable separator technology for long-life molten metal battery applications.

Both flash-steam and heat-of-fusion thermal energy storage technologies have been used in both stationary and mobile applications. Flash-steam technology delivered reliable performance at low-cost in railway shunting service, with alternative applications in short-distance maritime applications such as tug-boat service. Modern high-performance heat-of-fusion technology involves mixtures of sodium hydroxide and sodium fluoride (295oC). A mixture of lithium hydroxide and lithium fluoride offers storage of over 1100 KJ/Kg at 427oC. While the sodium mixture can provide the heat of vaporization to convert liquid water into saturated steam, the lithium mixture can superheat the steam for efficient expansion in engines.

The improved separator technology developed by Sadoway at MIT promises to greatly increase usable life expectancy of molten metal batteries for up to 15 years, greatly reducing battery replacement cost incurred every three to four years. Along some waterways, fully charged batteries would likely partially discharge moving a barge or tow of barges between navigation locks, where partial recharge may either be possible or be available. Short distances of overhead trolley cables could allow for initial acceleration from navigation locks, reducing deep-cycle demand on batteries that could blend in to provide propulsion as the vessel assemble reaches cruising speed.

Many decades ago, heat-of-fusion thermal energy storage technology was tested in railway propulsion and was capable of withstanding severe jolts. Precedent suggests that there may be scope to adapt modern heat-of-fusion storage technology to ocean going maritime propulsive applications. A large tank of molten sodium mixture to produce saturated steam and a small tank of molten lithium mixture to generate superheated heat could provide many hours of cost competitive propulsive energy, with increasing vessel size extending its operating range to several hundred miles. The suitability of using molten metal electrochemical batteries in ocean sailing is unknown.

While molten metal electrochemical batteries have been developed for stationary grid-storage applications, there may be scope to adapt the technology as energy storage for maritime propulsion along the gentle waters of navigable inland waterways.