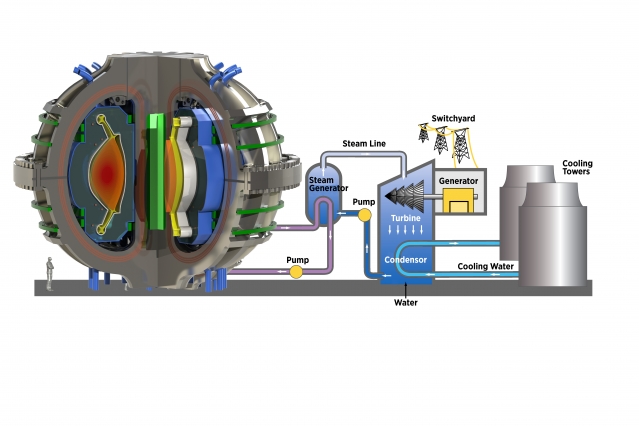 A new report on the development of fusion as an energy source, written at the request of the U.S. Secretary of Energy, proposes adoption of a national fusion strategy that closely aligns with the course charted in recent years by MIT’s Plasma Science and Fusion Center (PSFC) and privately funded Commonwealth Fusion Systems (CFS), a recent MIT spinout.

Fusion technology has long held the promise of producing safe, abundant, carbon-free electricity, while struggling to overcome the daunting challenges of creating and harnessing fusion reactions to produce net energy gain. But the Consensus Study Report from the National Academies of Science, Engineering, and Medicine states that magnetic-confinement fusion technology (an MIT focus since the 1970s) is now “sufficiently advanced to propose a path to demonstrate fusion generated energy within the next several decades.”

It recommends continued U.S. participation in the international ITER fusion facility project and “a national program of accompanying research and technology leading to the construction of a compact pilot plant that produces electricity from fusion at the lowest possible capital cost.”

That approach (which the report says would require up to $200 million in additional annual funding for several decades) leverages opportunities presented by new-generation superconducting magnets, reactor materials, simulators, and other relevant technologies. Of particular emphasis from the committee is the advances in high-temperature superconducting magnets which can access higher fields and smaller machines. The report recommends a U.S. program to prove out high-field large-bore magnets. They are seen as enabling faster and less-costly cycles of learning and development than extremely large experiments like ITER, which will not come on line until 2025, while still benefitting from the knowledge that emerges from those programs.

This smaller-faster-cheaper approach is embodied in the SPARC reactor concept, which was developed at the PSFC and forms the foundation of CFS’s aggressive effort to demonstrate energy-gain fusion by the mid-2020s and produce practical reactor designs by the early 2030s. This approach is based on the similar conclusion that high-field high-temperature magnets represent a game-changing technology. A $30 million program between CFS and MIT to demonstrate the high-field large bore superconducting magnets is underway at MIT and is a key step to a compact fusion energy system. Despite a handful of other privately funded fusion companies having offered roughly comparable timelines, the National Academies report does not envision demonstration fusion reactors appearing until the 2050 time frame.

The report also affirms that the scientific underpinnings of the tokamak approach have been strengthened over the previous decade, giving increasing confidence that this approach, which is the basis of ITER and SPARC, is capable of achieving net energy gain and forming the basis for a power plant. Based on this increased confidence the committee recommends moving forward with technology developments for a pilot power plant that would put power on the grid.

“The National Academies are a very thoughtful organization, and they’re typically very conservative,” says Bob Mumgaard, chief executive officer of CFS. “We’re glad to see them come out with a message that it’s time to move into fusion, and that compact and economical is the way to go. We think development should go faster, but it gives validation to people who want to tackle the challenge and lays out things we can do in the U.S. that will lead toward putting power on the grid.”

Andrew Holland, director of the recently formed Fusion Industry Association and Senior Fellow for Energy and Climate at the American Security Project, notes that the report’s authors were charged with creating “a consensus science report that reflects current pathways, and the current pathway is to build ITER and go through the experimental process there, while meanwhile designing a pilot plant, DEMO.”

Shifting the consensus toward a faster way forward, adds Holland, will require experimental results from companies like CFS. “That’s why it’s notable to have privately funded companies in the U.S. and around the world pursuing the scientific results that will bear this out. And it’s certainly important that this study is aimed at getting the government-based science community to think about a strategic plan. It should be seen as part of a starting gun for the fusion community coming together and organizing its own process.”

Or, as Martin Greenwald, deputy director of the PSFC and a veteran fusion researcher, puts it, “There’s a tendency in our community to argue about a 20-year plan or a 30-year plan, but we don’t want to take our eyes off what we need to do in the next three to five years. We might not have consensus on the long scale, but we need one for what to do now, and that’s been the consistent message since we announced the SPARC project — engaging the broader community and taking the initiative.

“The key thing to us is that if fusion is going to have an impact on climate change, we need answers quickly, we can’t wait until the end of century, and that’s driving the schedule. The private money that’s coming in helps, but public funding should engage with and complement that. Each side has an appropriate role. National labs don’t build power plants, and private companies don’t do basic research.”

While several approaches to fusion are being pursued in public and private organizations, the National Academies report focuses exclusively on magnetic confinement technology. This reflects the report’s role in the Department of Energy’s response to a 2016 Congressional request for information on U.S. participation in ITER, a magnetic-confinement project. The report committee’s 19 experts, who conducted two years of research, were also charged with exploring related questions of “how best to advance the fusion sciences in the U.S.” and “the scientific justification and needs for strengthening the foundations for realizing fusion energy given a potential choice of U.S. participation or not in the ITER project.”

The report’s publication comes at a time of renewed activity and interest in fusion energy, with some 20 private companies pursuing its development, increased funding in the most recent federal budget, and the formation of the Fusion Industry Association to advocate for the community as a whole. But the report cautions that “the absence of a long-term research strategy for the United States is particularly evident when compared to the plans of our international partners.”

That situation may be evolving. “We had a very nice meeting of stakeholders a month and a half ago in DC, and there was a lot of resonance among private companies, the research community, the Department of Energy, and Congressional staffers from both parties,” says Greenwald. “It seems like there’s momentum, though we don’t know yet just what form it will take.” He adds that the establishment of an industry association is very helpful for navigating and communicating in Washington.

“We would love to see the government have a role in things that lift all fusion companies, like advanced materials labs, the process of extracting heat from reactors, additive manufacturing, simulations, and other tools,” says Mumgaard. “There are many opportunities for collaboration and cooperation; every company will have a different mix of partnerships, even on personnel exchange as we do with MIT.”