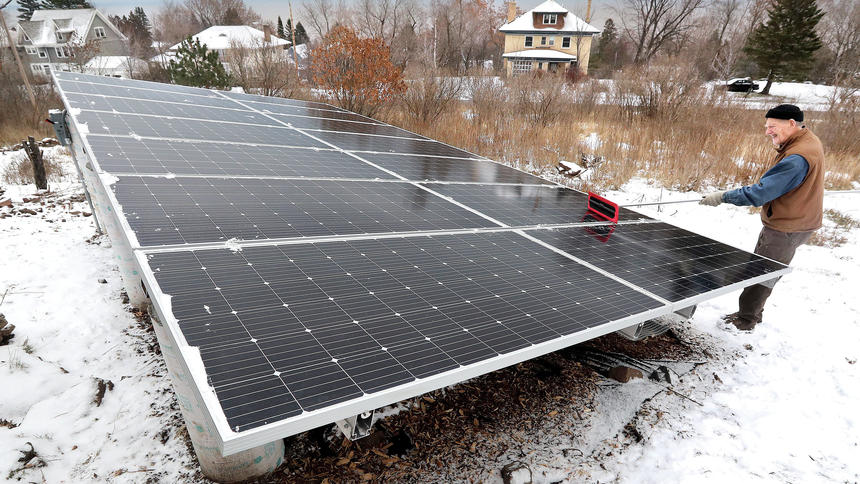 Even on the darkest day of the year, the sun is melting Tom Griffin’s power bill.

On a rocky outcrop below Griffin’s home on East First Street sits an imposing solar array, tilted to the southern skies, silently grasping for photons.

In a city that averages 185 cloudy days a year — and with seven hours and 20 minutes less sunshine on the winter solstice than on the summer solstice — solar power remains within reach for many.

“Even on a day like today we’d be producing a little bit of energy,” said Paul Helstrom, Minnesota Power’s renewable energy program lead. “I think it’s a bit of a misnomer that we don’t have a good resource here.”

He said about 100 customers around Duluth have a solar array on their property — plus another 150 in the utility’s greater coverage area and 98 customers who buy into the community solar program.

“It’s changed a lot over the years in terms of affordability and the size they’re able to obtain,” Helstrom said. “It’s really a phenomenal energy resource.”

Griffin spent more than the typical homeowner might on a solar array — roughly $25,000 for a 5-kilowatt system before rebates and incentives — but a look at his electric bill shows his power consumption from the grid has dropped dramatically since last winter.

“I’m told this array could reduce the amount of power we use by 50 percent,” Griffin said. “I thought it was going to be 10 percent.”

It wasn’t money that motivated Griffin — other than the desire to do good with the inheritance his parents left him. After a long career in renewable energy, the 80-year-old wanted to accomplish the things he had long advocated for.

“I was frustrated because I was in policy and talking a lot, but I couldn’t get any action,” Griffin said. “I decided at my age, I’m not going to live that much longer. I want to do something rather than talk about it.”

With a roof that didn’t quite work for what he wanted to accomplish, Griffin looked deep into his backyard.

“This was not the normal, cookie-cutter, plop-it-on your roof array,” said John Ruvelson with the Rural Renewable Energy Alliance, which helped install the array. “We scraped down the rock, drilled a bunch of anchors, did a bunch of engineering back and forth — he really went the extra mile to make it happen.”

Passersby may have noticed machinery traversing the hillside above Superior Street just past 24th Avenue East this summer. Those were sunnier times. But it’s not like the lights go out when the sun goes down: The secret is not to rely solely on the solar array with a generator or battery but to feed excess electrons to the grid.

“It’s really different than having a battery backup system where you really have to size it for the darkest day of the winter so you know that you have enough electricity for sure,” Ruvelson said. “To tie it in is a much more environmental way to approach solar.”

That’s because it doesn’t waste electricity that can’t be stored, he explained.

Tying a home solar system into the grid also makes the Winter Solstice less of a daunting day for big solar spenders like Griffin. Continued improvements to technology help, too.

Helstrom said folks interested in solar should talk to Minnesota Power, or peruse their website, as every property is going to have different needs and capabilities — it probably won’t require drilling bedrock, like in Griffin’s case, but clearly that is a possibility.

System costs can range $15,000 to $22,000, Helstrom said, but existing rebates and incentives can often cut the up-front cost of a project in half, he said.

There’s also the option to buy into community solar projects like the one at Kenwood Avenue and Rice Lake Road.

“Our solar garden is full, but we do have a waiting list,” Helstrom said. “The more interest we see in a waiting list, the more consideration we can give to future projects.”

Griffin grinned as he eyed his laptop, watching the watts roll in from the hillside behind his house.

“My life has been renewable energy since I was in my 40s,” he said. “I got tired of talking, and decided I’m just going to do something. Instead of taking a trip to Mongolia or somewhere, I’m going to spend my money on solar energy.”