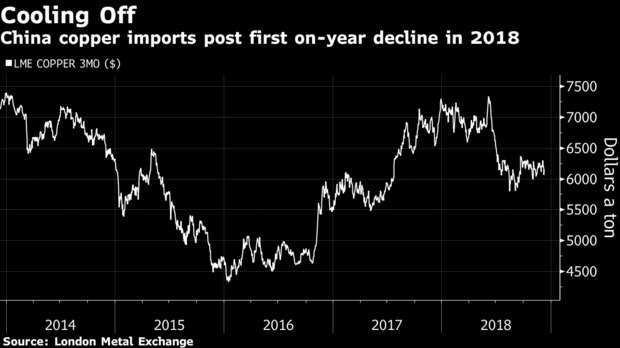 China’s monthly copper imports dropped for the first time this year as demand wanes due to slowing growth in the world’s biggest consumer of commodities amid a simmering trade row with the U.S.

Oft cited as a market indicator for economic health, the metal has been under pressure since the summer, threatening to unwind a three-year rally. Goldman Sachs Group Inc. warned in a note this week that conversations with copper investors revealed increasing worries over China’s economy. This concern was backed up by broader trade figures Saturday that showed growth in imports and exports faltering over the month, as the tensions with the U.S. stall trade.

Copper imports in November fell 3 percent on the year, the first such decline since December and flagged by a near halving in import premiums in recent months. Exports of steel also waned, as did purchases of its key ingredient, iron ore. “The general decline in copper imports, iron ore imports and steel exports can be linked to China’s economic slowdown,” said Xianfei Ji, an analyst with Guotai Junan Futures Co.

Other casualties from the trade war included the worst November in six years for Chinese soybean imports, as buyers shied off U.S. purchases made too expensive by tariffs. Conversely, aluminum exports hit a near four-year high, offering some relief from bloated domestic supply. But the cause was again trade-related as China is shipping more to take advantage of supply dislocations arising from U.S. action against Russia’s biggest producer.

The trade data for energy products marched to a different beat. Inbound shipments of coal slumped because of policy restraints, while cleaner-burning gas saw imports surged ahead of peak demand over the winter. And crude imports hit a record as buyers looked to tap higher refining margins and hit annual targets before the year’s end.