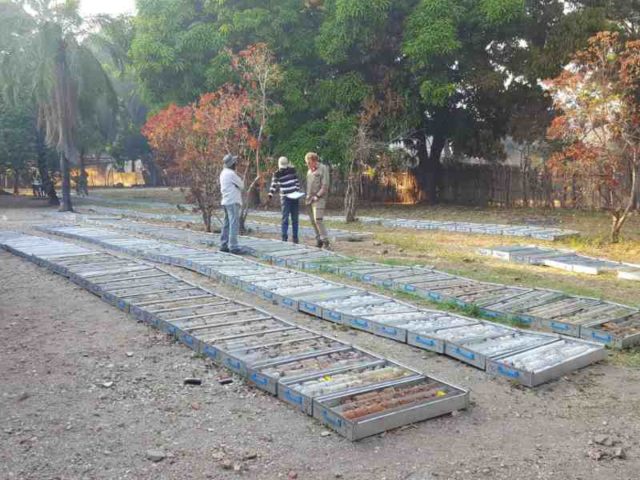 This follows a significant resource increase in the current mineral resource update for the Roche Dure pegmatite. AVZ Minerals has reported a 54.1% increase in total measured, indicated and inferred resources from 259.9 Mt to 400.4 Mt with an average grade of 1.66% Li2O (spodumene) containing 6.64 Mt of lithium oxide (Li2O), 300 000 t of tin as cassiterite grading 750 ppm Sn (tin) and 13 200 t of tantalum grading 33 ppm Ta (tantalum);

This mineral resource is contained within approximately 95% of the total strike of the Roche Dure pegmatite.

This mineral resource includes assay data from only 68 drill holes on 1 600 m of strike length, and geological data from a further 13 drill holes, to enable interpretation of a geological model.

Drill holes MO18DD001-MO18DD78 were completed in 2018 with commencement of the drilling programme in February this year and four holes which were drilled in 2017. A total of 25 403 m were used in the mineral resources estimate.

Recent and ongoing drilling has significantly increased the level of confidence in the central portion of the Roche Dure pegmatite where almost half of the new holes were drilled since August 2018, hence the significant conversion of indicated to measured resources.

However, further drilling beyond the area included in the maiden resource has confirmed significant inferred resources in areas along strike which were still being drilled in November 2018.

Whilst approximately 95% of the strike of Roche Dure has now been drilled, and shown to carry significant spodumene mineralisation, the down-dip extensions of these new areas remain to be taken to the targeted -350 m depth which indicates that there is still underexplored down dip extensions to the Roche Dure orebody to be reported on. This indicates the potential for the mineral resource to increase further when these new holes are reported on.

Additionally, AVZ Minerals still needs to drill test the M’Pete and Tempete pegmatites at the Kitotolo Sector just north of Roche Dure although the company has recently commenced wide spaced reconnaissance drilling at the Carriere de L’Este pegmatite at the northern Manono sector.

Recent drilling at Manono, completed to hole MO18DD083, included new drilling along strike on the northern and southern extensions to the Roche Dure pegmatite, which are located outside of the previously defined mineral resource. Drilling in these zones is likely to result in a further increase in the mineral resource tonnage as further data is obtained. The ongoing drilling and the updated mineral resource at Roche Dure demonstrates that AVZ is able to further delineate a globally significant hard-rock lithium deposit at Manono.

“The overall increase in the total resources is more than ample to underpin the ongoing internal scoping studies for a potential 5 Mtpa operation and follows close on the heels of our recently published, revised figures for a 2 Mtpa project, which indicated very strong economic fundamentals for the Manono lithium project,” says AVZ Minerals MD Nigel Ferguson.

“Additionally, there is a significant increase in the global tin content to 300 000 t and the tantalum content to over 13 200 t, which is expected to provide a significant offset in the operating costs for the planned processing plant.”

“With drilling at Roche Dure currently winding up for the year, these resource figures are expected to rise further in 2019 as data continues to come in from final drill holes completed. We are also waiting with interest for the results of a six hole, wide spaced, reconnaissance drilling programme at Carriere de L’Este in the northern Manono Sector which will be reported on early in 2019.”

“With Manono now confirmed as the world’s largest lithium deposit and drill results from the last quarter of 2018 still pending, we are confident that the Manono project will continue to grow and potentially become a world leading source of lithium,” Ferguson concludes.