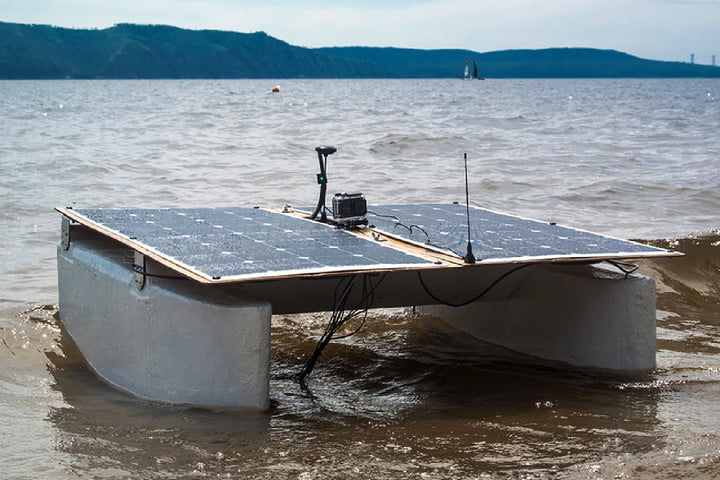 A great way of garnering attention (and, hopefully, success) for yourself as an entrepreneur is to latch onto whatever happens to be on the cutting edge of technology at that particular moment. Drones? Sure. Blockchain? You bet. The Internet of Things? Frankly, you’d be silly not to. But even with this behavior being standard practice, few buzzword bingo cards are quite so complete as that of a new Russian project involving a solar-powered drone boat that takes smart sensor readings and saves them to the blockchain.

To be fair, the so-called “Drone on the Volga” project actually promises to do some good. The work of companies Airalab and Smart IoT Distributions, the drone boat takes continuous water readings in the Kuybyshev Reservoir, the largest water reservoir in Eurasia, which is located in the Volga river. This data is then made available through the Ethereum blockchain, along with parameters such as exactly where the drone boat was at the time the readings were taken.

By analyzing the data, third-party companies can then work to find the source of pollution — hopefully to do something about it. Since Russia holds approximately one-fifth of the world’s freshwater, this is a mission that should be of interest to everyone.

“Imagine hundreds of such robots floating autonomously on a river without the need for human support,” Alisher Khassanov, chief engineer at Airalab, told Digital Trends. “Of course, to make this happen, they need an autonomous power source. These are solar photovoltaic panels. Such robots could be a source of a continuous stream of data on river pollution, protected by the blockchain.”

This isn’t the first time we’ve written about robot projects which aim to autonomously take water readings to help fight pollution. One of the most interesting of these is the flock of robot swans which patrol the reservoirs in Singapore, taking water quality measurements as they do. This data is made available in real time over the cloud to experts from water management agencies, who can then ensure that water quality problems are addressed quickly.

Hopefully, as the dream of smart cities gains momentum, projects like this will only become more commonplace. After all, if there’s one thing we can’t really do without, it’s clean water.