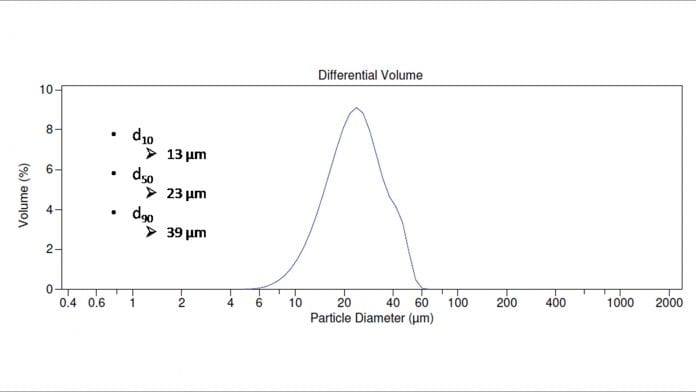 Elcora is a vertically integrated company that mines, processes, refines, and adds value to graphite. Elcora converts graphite into graphene and anode powder to develop electrodes for lithium-ion batteries.

Elcora has developed a process to convert graphite to graphene with a very high yield. Furthermore, Elcora’s graphene was ranked number one in the world in tests completed by the NUS center for advanced 2D materials see: https://www.elcoracorp.com/investors/jan-14-2016-elcora-graphene-ranks-number-one-in-test-results-completed-by-nus-centre-for-advanced-2d-materials/).

Elcora is in a unique position to produce graphene due to its vertical integration model. Elcora has a graphene R&D facility located in Canada that is dedicated to commercial graphene production (see Fig. 2) and use.

These tests show that Elcora’s graphite is of commercial quality and ready for implementation in large scale battery manufacturing.

Current state-of-the-art Li-ion batteries use carbon black as a conductivity promoter. Carbon black has high conductivity which reduces the overall resistance in the battery. Low resistance means current can flow easier, which equates to high power. Carbon black will be replaced and/or supplemented with Elcora’s highly conductivity graphene. A graphene-infused battery should reduce electrode resistance, resulting in higher power.

Current state-of-the-art Li-ion batteries use graphite as the active material in the anode. Graphite has a theoretical gravimetric lithiation capacity of 372 mAh/g. Silicon is widely studied as an alternative to graphite. Silicon has a theoretical lithiation capacity of 3579 mAh/g; almost 10 times the gravimetric capacity of graphite. Pure silicon electrodes have proven to be commercially non-viable due to the large expansion after full lithiation (> 270%). The large expansion causes particles to become electronically isolated, resulting in capacity fade. Electrical conductivity of the electrode will be enhanced by using graphene as a conductivity promoter instead of carbon black (as above). Also, a silicon ‘sprinkling’ strategy will be employed, where the active electrode component is 70-99% graphite, with 1-30% silicon. This will result in electrodes with higher capacity. Furthermore, the electrodes will be cost-competitive, commercially viable, and will not lose appreciable capacity over time. Companies like Tesla and Panasonic are pursuing a similar strategy.

Elcora is in a unique position to study graphene-infused Li-ion battery electrodes. Elcora is a producer of both graphene and Li-ion battery anode powder. Graphene is notoriously difficult to work with due to its relatively short shelf-life (weeks). Graphene has a short shelf-life because it is a meta-stable material. That is, graphene has a tendency to agglomerate and self-assemble back to graphite. As such, graphene should be used immediately after production. This is rarely accomplished, since most graphene producers don’t make Li-ion electrodes, and most battery electrode manufacturers don’t make graphene. Furthermore, after graphene is made, it usually takes weeks or even months before it is qualified and shipped to a customer. By that time, the graphene has degraded. Thus, when used in an electrode formulation, graphene does not give the expected benefits.

This gives Elcora a significant advantage over competitors. Elcora can use its proprietary process to make high quality graphene on-demand, which is then immediately used in electrode slurries. Hence, the graphene will retain the desired properties (e.g. high conductivity, high capacity, high power electrodes).

Most Li-ion batteries use graphite as the active component in the anode (negative side). The theoretical capacity of graphite alloying with lithium is 372 mAh/g (i.e. LiC6). Commercial electrodes can achieve ~ 350 mAh/g reversible capacity, which is considered the practical limit. Silicon is often studied as a replacement to graphite due to its high theoretical capacity (3579 mAh/g).

However, when silicon alloys with lithium it forms Li15Si4, which results in a volume increase of > 270%. Similarly, the silicon particles shrink by the same amount when lithium is removed (i.e. the cell is discharged). This ‘heavy breathing’ causes the silicon particles to crack and pulverise when cycled. For this reason, pure silicon electrodes have not been commercialised for use in Li-ion batteries.

Instead of studying pure silicon electrodes, most battery manufacturers use a ‘sprinkling’ strategy, where small amounts of silicon are added to a graphite electrode. This make sense financially because battery manufacturers can use existing hardware and formulations which are wide-spread and well-understood. The extra silicon increases capacity, which increases energy density. The volume change of the electrode is minimised, because only a small amount of silicon is sprinkled into the graphite electrode (e.g. 90% graphite, 10% silicon).

Graphene is one of the strongest, and most conductive substances currently known. Graphene will be added to the graphite-silicon anode mixture to increase conductivity, and increase electrode stability. The increased conductivity will allow Li-ion batteries to be charged/discharged at a faster rate. This means that batteries will be able to be charged in a shorter amount of time. This is important as society moves towards electrified mobility (e.g. electric cars like the Tesla model S).

Society is accustomed to ‘filling-up’ in a matter of minutes, then driving away to continue their day. At the moment, electric cars take much longer to ‘fill-up’. Even the best super chargers take 30 minutes to achieve 80% capacity. A graphene-infused electrode would increase electrical conductivity, thus decreasing resistance, and decreasing charge time.
Graphene’s strength will contribute to making a more robust electrode, which is especially important when adding silicon to the graphite anode. The high strength of graphene will help hold the electrode together while it is de/lithiated (i.e. dis/charged).

Previous research has shown that silicon particles lose electrical contact with the rest of the electrode during cycling. Graphene will be added to provide a strong scaffolding to ensure the silicon electrodes remain in electric contact during the de/alloying process.
Hence, graphene will both increase conductivity, while increasing electrode stability. Similarly, the addition of silicon will increase energy density. The result will be a Li-ion battery with higher-energy density (it will last longer) and higher conductivity (it will charge faster).