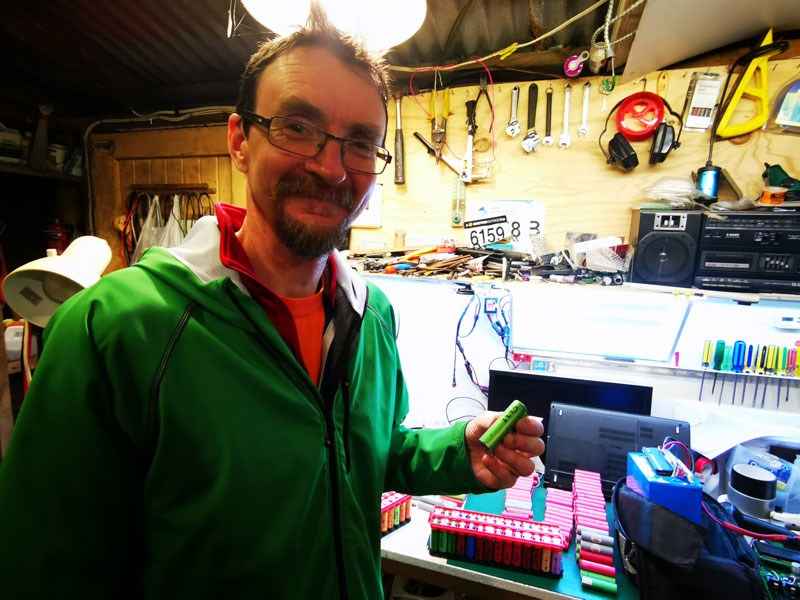 Rain thunders down on the corrugated roof of Paul Kennett’s Lower Hutt workshop, but inside the place glows with LED lights and digital battery displays.

Kennett, perhaps best known along with his brothers as a publisher of best-selling cycling and mountain bike guidebooks, has joined the ranks of a small but growing band of hobbyists making their own DIY powerwalls.

They tinker away in sheds like Kennett’s, soldering iron in hand, constructing battery packs to store energy from solar panels with the aim of cutting their power bill – and their carbon footprint. Then they take to YouTube to outline the process, a maker community keen to share their knowledge.

“A scene has sprung up,” says Kennett, one that feeds off our insatiable demand for battery-powered consumer electronics. The battery packs Kennett powers his workshop with, uses the discarded batteries from obsolete gadgets, in particular, the 18650 rechargeable lithium-ion battery, which features in hundreds of millions of laptop battery packs.

“They are a commodity item and it is reasonably easy to source them from IT recyclers,” says Kennett, who will be sharing his DIY powerwall tips at the Wellington Maker Faire being held at the TSB Arena on Sunday.

“You can put hundreds or thousands of them together to make a decent-sized battery pack.”

The cylinder-shaped brightly-coloured batteries – six of them form a typical laptop battery – are stripped from their case by recyclers. Then they are shipped to processing plants that break the batteries down into their constituent parts – cobalt and lithium salts, stainless steel, copper and aluminium, for re-use in battery making.

But Kennett intercepts some of them. He regularly rides his e-bike to a nearby e-waste recycler where he pays around $100 for battery cells that would have made up 50 laptop batteries.

“It is like opening presents,” he says. “You don’t know what you are going to get.”

Some of them are leaky or rusty, a sure sign they are no use. But of those he runs a voltage test on, he finds around 70 per cent are useful, which goes to show that our electronics are obsolete long before the battery dies.

Weeding out bad battery cells is crucial to the safety of the whole DIY enterprise.

“When they go bad, the lithium-ion batteries start to develop little fractures inside that are like micro short-circuits. If you develop enough of those then it will short and you’ll get a massive amount of current running through it,” says Kennett.

He has no official electrical qualifications or certification, which aren’t required to work on these type of relatively low-power systems anyway. Kennett spent a year studying towards an electrical engineering degree in the early 1980s, before dropping out because he “wanted to play with microprocessors”.

He joined the Wellington company Lester Abbey and Associates, which made embedded computer systems for washing machines, fruit drying devices and alarm monitors. In 1984, Kennett discovered mountain biking which kicked off a decades-long passion for exploring and writing about the stunning bike trails of New Zealand, a business that received a boost on the back of Prime Minister John Key’s scheme, kicked off in 2009, to build a network of cycle trials the length of the country.

But alongside his biking grew a passion for energy efficiency. He bought his first home in 2004 and set to work adding a double ceiling and floor insulation, then a solar-powered hot water system.

He used a hair dryer to blow thousands of polystyrene beads into the outside walls of his house to make it even more energy efficient. Then his interest turned to cutting carbon.

“What would it take to reduce my personal carbon footprint to 40 per cent of my 1990 levels by the year 2020?” He asked himself.

Unable to afford a new electric car, a few years ago he instead looked for a cheap second hand Nissan Leaf, the world’s best-selling electric plug-in car. The plan was to find one with a knackered battery and build his own lithium-ion battery as a replacement.

That’s where the interest in all of those multi-coloured 18650 batteries came from. It was by no means a crazy idea. Even now, leading electric car maker Tesla uses the exact same batteries in its Tesla cars. Over 7,000 of the batteries are packed into the battery model that powers the Model S and Model X Tesla.

They have also been used in the Tesla Powerwall battery packs for home use, which Tesla has been selling in New Zealand for the last couple of years. Tesla has provided inspiration for Kennett’s own DIY powerwall efforts.

“There are brilliant little ideas we steal from them,” he says.

“For instance, Tesla has a fuse on every single battery cell. If any individual cell goes bad, it will blow the fuse and disconnect itself from the system.”

Kennett bought a 3D printer to make his own plastic battery housings and added the all-important power inverter and cabling. The cobbled-together system can store around 10kWh (kilowatt hours) of energy from the solar panels on his workshop roof. That’s less than the 13.5 kWh capacity of the Powerwall 2, Tesla’s newest battery pack, which is rated to cover the daily energy needs of a mid-sized home.

But it is also vastly cheaper. Kennett estimates he’s spent up to $1,000 on the Powerwall in addition to the outlay on solar panels. A Tesla Powerwall 2 sells for $14,800 including the supporting hardware. Installation can cost $1,600 – $4,500 more.

Then there is the cost of solar panels to factor in. It is a big outlay that offers a return on investment only over the long term, though solar installers have pay as you go plans to take the sting out of writing a big cheque up front.

But Kennett isn’t advocating DIY powerwalls as a cheaper alternative for the family home.

“It is cheap, but it’s an absurdly time-consuming process. I’ve enough curiosity and ingenuity to make it work.”

“These batteries are designed to vent rather than explode, but it is possible for them to self-ignite. The key to safety is identifying bad cells. You’ve got to do lots of testing.”

Who has the time or inclination for that? Kennett, a Tesla fan, recommends the Powerwall or equivalent from vendors such as LG, for those who want hassle-free battery power to store solar energy produced during the day for use overnight.

“Elon Musk’s had a rough year, but Tesla have been putting their minds to it longer than anyone else. They’ve come up with some really good solutions to tricky problems.”

His plan is to add more battery cells to his own configuration – he has an old computer rack he plans to fill with batteries, so that he can charge his Nissan Leaf in addition to powering his workshop. As for the house, he thinks that will be a stretch for his DIY set-up.

“I’ve done the numbers on going off-grid and it doesn’t really make financial sense if you are actually connected to the electricity network,” he says.

As for the viability of solar power, he says the price of the panels, electronics and batteries is coming down all the time.

His colleagues in the powerwall maker community are also working on standardised powerwall configurations that would make it easier for the more adventurous to put together their own systems.

The supply of unwanted batteries certainly isn’t likely to disappear anytime soon. Despite the move to thinner pouch batteries in laptops and tablet computers, which are harder to convert to Kennett’s purposes, billions of 18650 batteries continue to be produced every year for a range of devices by the likes of Panasonic, which produces batteries for the Tesla.

Mobile phone batteries are no good – by the time we discard them, the batteries tend to be fried.

But a new source of batteries is on Kennett’s radar and his cycling connections are helping him get his hands on them.

“I’ve got good relationships with bike shops around Wellington. They give me dead e-bike batteries, which I rip apart into the individual cells and do the same testing process,” he says.

Ultimately, says Kennett, the DIY powerwall project is one little effort to reduce power consumption, which will need to be amplified on a global scale to reduce the worst impacts of climate change.

“There are all these batteries being wasted. I’m just interested in putting them to good use.”