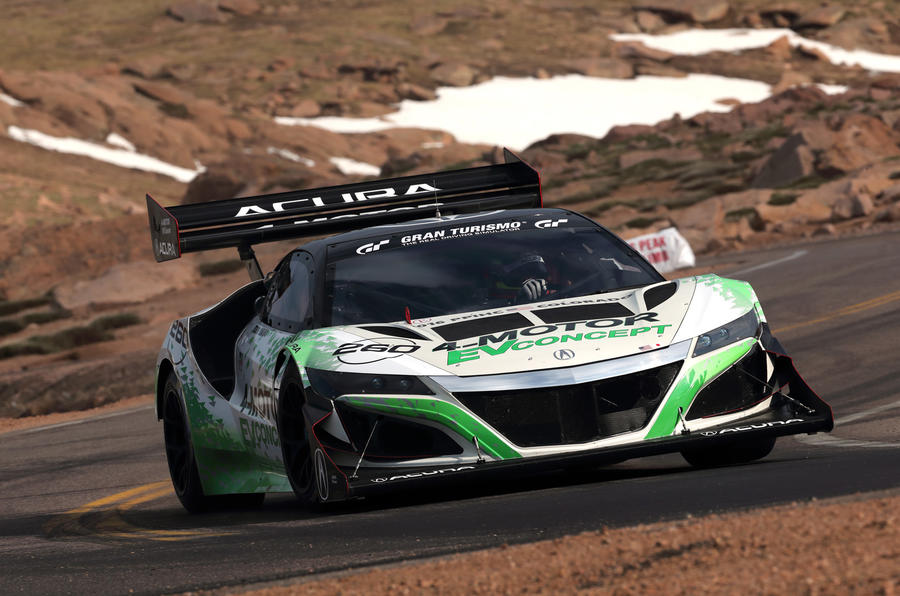 Honda may have more plans for electric vehicles than it has initially let on, as Honda’s head of R&D recently broke the news that the next-generation Acura NSX may pull from the NSX-inspired 1,000 horsepower fully electric beast that it took to the infamous Pike’s Peak challenge. That’s tasty.

In the Pike’s Peak hill climb of 2016, the Acura EV sported four motors that put down 740 kW and 800 Nm of torque combined. The motors gulped power from the onboard 70 kWh lithium-ion battery pack, which all told tipped the scales at right around 1,500 kilograms. The light weight and impressive power output resulted in an estimated 0–100 km/h time of just 2.5 seconds, but don’t get all hot and bothered about the prospect of a fully electric Acura supercar just yet.

The all-wheel-drive NSX only went on sale last year, so it will likely be a solid 5 years before we see a new version of the car released, electric or not. At that point, Honda will have at least one fully electric vehicle in production (its Urban EV, coming in 2019) and hopefully quite a few more if it wants to have any shot at maintaining a foothold in the Chinese automotive market.

Battery technology and battery prices will both have improved drastically on the open market as battery manufacturers push to build capacity for surging automotive demand in the face of today’s constrained production capacity.

We continue to be hopeful that Honda will pull a rabbit out of its hat and truly dive into the near-term promise of battery electric vehicles, away from its neverending-story focus on hydrogen fuel cell vehicles. Honda’s Clarity lineup is broadening in that direction, but we yearn for more from a company with such reach and such promise. We expect Honda to have a more positive impact on the road leading away from fossil fuels and into a zero-emission transportation future.

The Honda Clarity Electric hints at the possibility of a mainstream fully electric vehicle bearing the Honda badge that consumers can buy with no compromises, but mainstream consumers expect more range than the 89 miles it is sporting. Bump that up to around 200 miles and they’ll start flying off the lots.