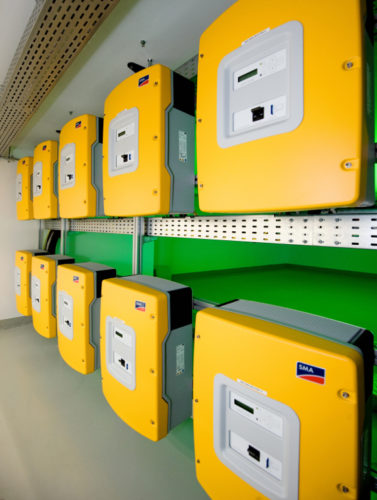 Adding storage to an existing solar array is not always an easy, plug-and-play process. It could be if the solar array was installed storage-ready, but with the rapid advancements of solar+storage in the last few years, it’s unlikely many legacy solar systems can easily adapt to battery connection. But that doesn’t mean it’s impossible; there are just a few important questions one must ask before starting a retrofit solar+storage installation project.

The inverter already in use on the PV system determines a lot. For example, existing systems with microinverters (which make the DC-AC conversion at the panel-level) will need an AC-coupled system for storage, since the battery cannot be incorporated into the DC lines before AC-conversion. If the existing inverter is in good, storage-ready working condition, AC-coupling storage to an array is as easy as installing a new battery-based inverter along with the batteries. If the existing inverter needs replaced, one can go the DC-coupled route with a new storage-compliant inverter, a DC-DC converter and the batteries.

What is the make, model and age of the existing inverter?

To accommodate energy storage, inverters must have frequency control capability—no matter if the system is AC- or DC-coupled. If older inverters cannot frequency shift, they should be replaced to add batteries, suggested Catherine Von Burg, CEO and president of lithium-ion energy storage manufacturer SimpliPhi Power.

“If they are not replaced, grid-tied inverters will shut down regularly as the frequency shifts out of range,” she said. Adding new, advanced inverters that can regulate charges is the only way to include storage on an existing system.

The brand of inverter can also lend clues as to how to add storage. For example, if the system uses an SMA Sunny Boy inverter, it will require the addition of a Sunny Island battery-based inverter to AC-couple an array. Likewise, SolarEdge systems require a new StorEdge storage solution to incorporate batteries.

Inverters are usually only warrantied to 10 years. If the inverter is approaching its warrantied lifespan, it’s a good idea to upgrade.

“It may be advantageous to replace the inverter with an inverter designed to accommodate storage, or DC-couple the system with charge controllers and design a more elegant solar+storage solution from the start, allowing options to integrate storage immediately or in the future,” Von Burg said.

A solar array’s physical climate and political climate will guide how to add storage to an array. Extremely hot locations will require a certain battery chemistry, and not all storage devices can be installed outside in the elements. Likewise, certain states and utilities allow the use of advanced grid functionality—like time-of-use (TOU) arbitrage or backup power. The chosen battery type is dependent on what each jurisdiction allows. The incentives offered in each area could also influence what type of storage is added to an existing solar array.

Where is the solar system installed?

Not all batteries can be used in hot climates or in freezing temperatures. The battery used in Ohio may differ from what’s commonly used in Arizona.

“SimpliPhi’s batteries perform very well in temperatures up to 140ºF,” Von Burg said. “Our LFP (lithium-iron phosphate) battery chemistry does not pose the risk of thermal runaway, fire or require cooling or thermal monitoring that other lithium-cobalt based chemistries do, such as NMC (lithium-nickel-manganese-cobalt-oxide) and NCA (nickel-cobalt-aluminum) used by Tesla, LG Chem and others.”

Because of optimal ambient temperature ranges, some battery chemistries are required to be installed indoors to control their temperatures. Battery warranties could be quickly voided if the storage system exceeds the recommended temperature range. So if the solar system owner only had a spot available outside to install the battery, the owner may have to find a new location or choose an outdoor-approved battery.

Certain pro-storage states have already implemented solar+storage installation regulations. To add storage in California, inverters have to be Rule 21-compliant. This usually just means an inverter has to be “smart” with additional grid functionality, so older inverter models will need an upgrade. Similarly, Hawaiian solar+storage projects must use Rule 14H-compliant inverters.

Why does the customer want to add storage?

The most important area of focus is the motivation behind why a customer is exploring storage, said Kyle Frazier, director of sales for solar+storage installer Freedom Solar.

“Is storage a solution for emergency power? Or is the motivation to store excess energy produced by solar during the day, so that it can be used in the evening when the sun goes down?” he said. “In places with a TOU tariff, the customer may be looking to charge their batteries with solar or grid power when rates are cheap and discharge the batteries when power is most expensive.”

Depending on the motivation, it’s important to have an inverter that allows for that specific storage-use and an appropriately sized battery bank to support the power needs.

Of course, all of these advanced grid functionalities are dependent on if the local utilities support them.

“Each utility company has a different set of interconnection requirements that may help or hinder the customer’s primary motivation in adding storage,” Frazier said.

Who owns the solar system?

Not to be overlooked, the existing solar system’s ownership is important to know when incorporating storage. If the customer has full ownership of the system, updates are easy. Leased systems, on the other hand, may have restrictions on adding certain equipment.

“Leases typically have a wide range of restrictions as to what changes can be made to the home or business and its electrical loads,” Von Burg said. “Adding energy storage may be prohibited by lease terms. Leasing can be advantageous up front, but customers should be careful to read the small print in the contracts that may prevent them from making changes in the future.”

Adding storage to an existing solar array doesn’t have to be a difficult process, but attention to detail is important. Installers should understand the customer’s storage needs, the local storage climate and the current solar equipment in use to make a storage addition as easy as possible.